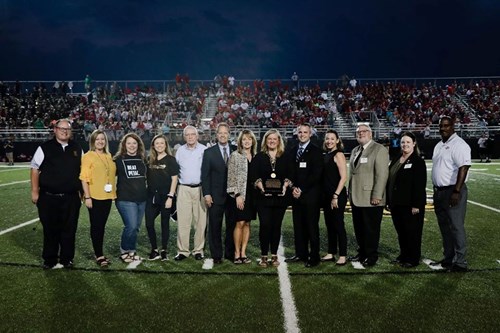 Oak Grove High School (OGHS) in Hattiesburg, Mississippi was awarded the 2019 NFHS National Performing Arts School of Excellence in the Fall. The award was presented in a special celebration to the school in October as a part of National Performing Arts Activities Week. Read more about the award here: https://www.nfhs.org/articles/mississippis-oak-grove-high-school-named-national-performing-arts-school-of-excellence/

We wanted to check in with all of the fine arts teachers, coaches and directors at Oak Grove High School halfway through the year to give them a chance to recap the first semester and list some of their accomplishments. With a little help from OGHS principal Helen Price, we were able to get the information needed to help focus on the wonderful fine and performing arts educators and students at Oak Grove. "I am so proud of them," added Price.

Under the direction of Jerry Pickering, the Oak Grove High School Band had a busy and productive Fall Semester. The band’s halftime production was entitled Sleight of Hand and featured elements of a classic magic show set to original music and the classic song “Pure Imagination” from Willy Wonka and the Chocolate Factory. The band had a successful competition season, earning All-Superior ratings at State Marching Evaluation in Gulfport, MS and placing 3rd in Music and 3rd in Percussion at the 6A MBA State Marching Championship in Flowood, MS. After championships concluded, the band presented their annual Holiday Concert. Two students from OGHS were sent as representatives to the Mississippi Bandmasters Association State Band Clinic in Natchez where they worked with nearly four hundred students from across the state to present a concert led by nationally renowned conductors. Pickering lists the highlight of their semester as being recognized by the National Federation of High School Associations as the 2019 Performing Arts School of Excellence. "We are extremely proud to be a part of the performing arts at Oak Grove High School and we look forward to a continued tradition of excellence in the arts in the Oak Grove community," said the OGHS band director.

The 2019-2020 season has been successful so far for the Warrior Debate Team according to coach Shane Cole. With multiple wins across the state and by earning their first two NSDA Qualifiers during Congress Qualifiers, positive things are in the future for the team yet again.  Within the next month, qualifiers for both NSDA and NCFL will occur. Eight students have qualified into the National Individual Events Tournament of Champions.  Those qualifiers and preparation towards an attempt at the team’s 13th state championship are what is on the horizon.

"In addition to team accolades, nine students have earned the honor of NSDA Academic All American," mentioned coach Shane Cole, who himself has been awarded the Don Crabtree Distinguished Service Award with the NSDA.

The Warrior Debate Team has lofty state and national goals and is once again headed towards them as they are looking for a successful end to the 2020 school year.

Oak Grove High Theatre has been chosen as one of the top five performances from South Mississippi with their production of Peter and the Starcatcher. This was Oak Grove's 21st time to represent at state under the direction of Suzanne Allmon. At the South Mississippi Drama Festival, Arrione Magee, Calvin Pierce, and Reagan Daniell were chosen to the All-Star Cast, Graham Gustafson and Julia Null were recognized as Outstanding Student Technical Directors, and Suzanne Allmon was recognized for Outstanding Direction. "I am so proud of this group! This show has been a creative stretch for all of us and they have risen to the occasion", said award winning director Suzanne Allmon. The 45-member cast and crew for Peter and the Starcatcher competed at the Mississippi Theatre Association State Festival held at the University of Mississippi in January. Among the many accolades, Arrione Magee made the All-Star Cast while OGHS production of Peter and the Starcatcher won Best Ensemble Acting. Students from OGHS also competed in individual events and were honored for: best costume design, best makeup, group musical performances and solo musicals. 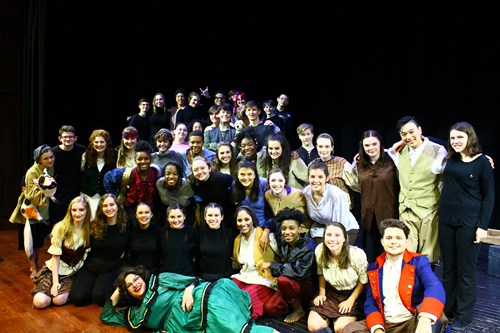 The Oak Grove High School Women’s Choir is a non-auditioned group of 40 singers grades 9-12. They have experienced a lot of success, including earning all superiors at MHSAA district and state festivals in performance and sight reading.  The students have also earned various superior ratings and first place awards at other local, state, and national competitions. "We were very excited to be a part of the MHSAA award granted to our school this year," said Dr. Cassandra Weiss, OGHS Choral Director/Guitar Instructor and Music Teacher.

The 2019-2020 school year started with various community performances which included singing at Warrior home football games. The ladies performed an entire Fall Concert and an exhibition concert at Pearl River Community College.  They also earned all superiors at the Riverland Choral Festival in Pearl High School in the women’s choir division and the ensemble division.  The OGHS Women’s Choir was also invited to sing the National Anthem at the Mississippi verses Alabama All-Stars football game held at USM. During the holiday season, the women’s choir toured the community singing Christmas Carols in the mall and other local places.  They rang in the Christmas spirit by singing a full Christmas Concert in conjunction with our other choral programs and guitar classes that ended with Handel’s “Hallelujah Chorus.”  "They strive to sing in many genres, languages and styles. Eleven of our students have also already auditioned for collegiate choral programs and have been offered scholarships to study music in the fall," Dr. Weiss said proudly. Select members of the women’s choir attended the Southern Invitational Choral Festival at USM, auditioned for the ACDA honor choir, and were selected to participate in the William Carey University Honor Choir.  The OGHS Women’s Choir was most honored to have been selected as the only high school exhibition choir for the William Carey University Honor Choir Concert.

For the remainder of the year, the students will be preparing for the MHSAA State Performance Assessment in hopes of earning all superiors again in performance and in sight reading with the intentions of winning Sweepstakes. They are also preparing for the Spring Concert to be performed in May, 2020.  The choral department will host 3 student teachers from USM and also regularly welcomes dozens of music students who are earning observation hours.  Dr. Weiss has also been invited to judge the William Carey Choral Festival for the sixth year.

Dr. Weiss is excited about starting the guitar program at OGHS where over 60 students have successfully learned to play beginner to intermediate level guitar. She is also hosting a guitar festival, choral festival, and guitar workshop at OGHS to the public in order to enhance music programs in Mississippi. Along with all of the music programs that she is involved in at OGHS, Dr. Weiss has been nominated for the 2020 AIMM award through the Arts Institute of Mississippi.

The Golden Spirits started their season in June at UDA camp in Starkville, MS. At camp, 24 dancers competed in a home routine, drills downs, and learned two routines. The team received second place in their home routine, first in drill downs, the spirit stick, an All Superior trophy, and a bid to the National Dance Team Championship in Disney. During the fall, the team practiced every morning, getting ready for performances at pep rallies and home football games as well as getting ready for competitions. In November, the team competed in the Mississippi Dance Regional in Jazz and Game Day. The team placed first in Jazz, second in game day, and received the Sportsmanship Award. In December they competed at the MHSAA Dance Competition in Jazz and Kick where they received first in Jazz and second in kick. This was the team's 12th state title, according to coach Casey Morrison. The dance team traveled to Disney for the UDA National Dance Team Championship the first weekend in February and competed in Large Division Jazz, Kick and Game Day. 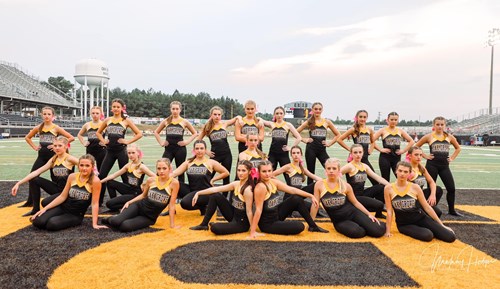 Kyle Mills is the Manager of Performing Arts and Sports at the NFHS. He holds a bachelor’s degree from Cornerstone University in Grand Rapids, Michigan and a master’s degree in sport administration from Central Michigan University in Mount Pleasant, Michigan. Prior to the NFHS, he worked in a variety of roles with the Indiana Pacers, FOX17 and the Prep Hoops Network.

Words of Wisdom for the New School Band Director