Arizona Volleyball Team Aces Service On and Off Court 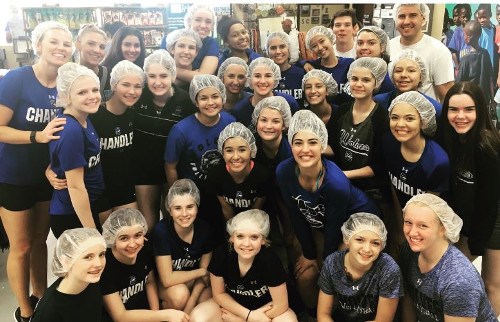 Student-athletes are members of a variety of communities – their teams, schools, churches and hometowns. The amount of involvement in each may vary, depending on how busy the student is in their season or in school, but the quality of their involvement in each community is what represents the value of citizenship.

Most student-athletes have a high degree of focus on involvement in school and with their teams, so much so that sometimes the larger community gets overlooked. In order to expand the focus to more worldly issues, Audra Slemmer, head coach of the Chandler (Arizona) High School girls volleyball team, decided to organize a mandatory community service event for her girls.

“It’s important, especially for high school kids, to get out there and be serving in their community,” Slemmer said. “I have been at Chandler for about nine years and I’ve always wanted to do a community service event with our kids, but it’s just been hard with our schedule.

“Finally, I found an event called Feed My Starving Children in Mesa, so it’s relatively close to us in Chandler. We were able to go during our fall break after a practice one day and donate a couple hours of our time just packing meals.”

Feed My Starving Children is a nonprofit organization that arranges for meals to be packed and sent to nearly 70 countries around the world. The day the Chandler team volunteered last fall, Slemmer said the team packed about 40 boxes designated for the Philippines. Each box contained enough meals to feed a child there for roughly six months.

The organization also takes donations to help pay for the food and the cost of packing it, so Slemmer said her team turned one of its games into a fundraiser.

“One evening, during one of our home volleyball games, all the proceeds from our concession stands – everything that we raised – was donated to Feed My Starving Children,” Slemmer said. “I think we ended up raising a little over $100 during that one game.”

Slemmer said the event was unique in that her entire program participated, not just the varsity team.

“One of our other coaches on staff had done it with just one team previously,” Slemmer said. “Our programs will do some community service, but they usually just do it with the varsity team, so I wanted to make it an experience for the whole program. I think it was good team bonding to take all three teams – freshmen, JV and varsity – and that way they could kind of work together to help other people out.”

In addition to teamwork, Slemmer said she was happy that her players took away gratitude, an awareness of the world around them and a desire to keep serving their communities.

“That was the big thing the girls kind of took away and mentioned to me on a number of occasions – how thankful they are that their mom and dad are available and have the money to provide them meals on a daily basis, and that there are less fortunate people in the world,” Slemmer said. “It meant a lot to me that they actually came, worked hard, had joy throughout the experience and thoroughly enjoyed serving others. It was a mandatory event, but the kids were excited. A lot of girls mentioned to me that they would like to continue doing this in the future.”

Slemmer would also like it to do it again in the future, and she is currently working on arranging an event for Chandler’s sand volleyball team, which begins its season this month, to participate in during its spring break.

“I definitely want to make the Feed My Starving Children at least a once-aseason tradition and maybe even look for other opportunities that they can serve directly in the Chandler community,” Slemmer said. “It’s a little difficult just because you’re working with high school kids and their type of schedule.

“Feed My Starving Children was great because you could just sign kids up, it was during a two-hour block period during after-school hours, so that will probably be our go-to just because it kind of fits with the high school student schedule.”

Chandler volleyball players also have chances to serve at the team’s annual summer camps as coaches. Slemmer considers it an important part of her job to make sure they have every opportunity to help out their community in whatever way possible.

“As a coach, in my program and coaching philosophy, obviously I want them to learn volleyball skills and be successful on the court, but it’s one of my main priorities to teach kids that it’s not all about winning,” Slemmer said. “It’s about becoming a better person, serving others and helping those in need – just being a serving person.

In her choice of career and coaching philosophy, Slemmer’s apple doesn’t fall far from the tree. Her father, Harold, has been the executive director of the Arizona Interscholastic Association for almost
20 years.

“Audra has always been a very loving and giving individual; certainly her Christian faith has always driven her to demonstrate real love and concern for others,” Harold said. “She believes when kids learn to help others, it will make them better individuals and teammates. I am very proud of her to see that her program success isn’t just determined by wins alone.

“I was also proud that she believed part of her role as a coach was to not only teach her players to be good volleyball players, but to use their energy and abilities to give back to those less fortunate. Volleyball is demanding enough, but to spend their own time contributing to an important, worthwhile cause is definitely a truly teachable moment.”

As the executive director of a state association that focuses on citizenship as a tenet of its Pursuing Victory with Honor initiative, Harold said he’s pleased that his daughter has taken it upon herself to incorporate those kinds of values in her program.

“I am most proud of Audra for taking the initiative to not only make it an important goal of her program, but also recognizing the fact that, as a coach, she will have an impact on the values, habits and character of all her players,” Harold said. “Taking action to ensure that happens is the most important effort she could make in the overall development to the many players she will coach throughout her career.

“Hopefully, through the experience, her players will learn that it’s important to help others whenever the opportunity presents itself. In the end, they will practice that attitude throughout their lives.”

Slemmer echoes her father’s sentiments and also said she realizes that since most of her players will not go on to play in college, her role takes on even more significance.

“As high school coaches, it’s our responsibility to kind of help prepare them for life and help prepare them to be good people in the community, good servants and citizens,” Slemmer said. “They’re taking away an experience from the program that is kind of something they can use post-high school, post-college, post-athletics.”

Juli Doshan is a former staff member of the NFHS Publications and Communications Department and now lives in Washington, D.C.

The Not-So-Little White Lie: Antiracism and the Classroom