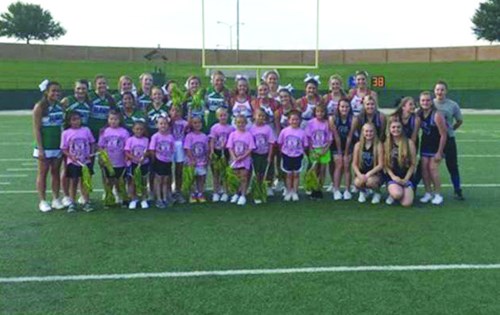 What do three different high school varsity cheerleading squads, 20-plus Pee Wee Cheerleaders, two all-star football teams and a bunch of guys in funny-looking hats have in common? They and fans from all over the north Texas area were on hand on a hot weekend in June for the 78th Maskat Shrine Oil Bowl Game.

The Maskat Shriners have been putting on the Oil Bowl in Wichita Falls, Texas, since 1938. The game itself is the showcase event of a weekend of activities to raise money for the Shriners Hospitals. The Shriners have 22 of their own specialty hospitals located across the United States, Mexico and Canada.

These specialty hospitals treat children up to the age of 17 for certain conditions or injuries, regardless of the parents’ ability to pay. Over the years, the format of the game has changed, but the mission has always been the same. As the official motto of the Oil Bowl says, “Strong legs run, so weak legs may walk.”

For many years, the game was a Texas vs. Oklahoma contest of high school all-stars. In recent years, it has become an East-West game, with most of the players from Texas, along with some from neighboring states. Regardless of the format, the big winners have always been the children who are being helped by the Shriners Hospital for Children.

The Shriners hold a special place in the hearts of the Wichita Falls (Texas) City View Junior/Senior High School cheerleaders. Steve Harris, City View Independent School District superintendent, holds the position of The High Priest and Prophet for the Maskat Shrine. He learned that a student, a double amputee, had outgrown his prosthetic legs. His family could not afford to have them replaced, and the student had gone from riding his bicycle to school every day to riding the bus and using a wheelchair. Harris got the boy and his family in contact with the Shriner Hospital in Houston, where he was fitted and received his new legs. This is a great example of the work the Shriners do in the local community. 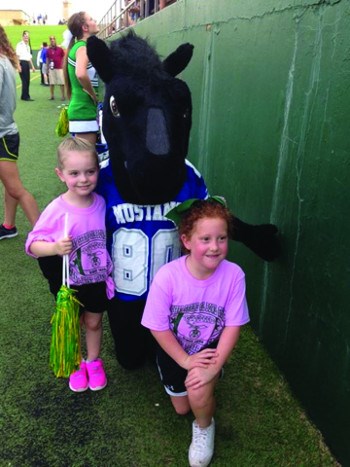 Unfortunately, in recent years, attendance at the Oil Bowl had been waning and, as a result, funds being raised had begun to decline as well. Although the game has usually had area cheerleading squads on the sidelines, this year the organizers added a new twist to generate more local interest and involve more families.

Having the little girls cheer alongside their high school counterparts was a great idea – a last-minute addition put into place only a week before the game. All of the details – from which cheers and chants would be taught, who would oversee the signups, when and where to plan the camp, how to effectively get the word out, to who would be responsible for taking the girls to the restroom during the game – had to be lined out. There was much planning and learning, but everyone jumped in to do whatever they could to make this endeavor a success.

The three cheer coaches and their squads worked together using social media and each other to ensure that all bases were covered. The three squads came together – quickly and unselfishly – to learn the various cheers and chants and then, in turn, to teach them to the little girls at the camp. The way the girls worked with the little girls was amazing, with many words of encouragement and positive role modeling, with the little girls looking up to the high school girls, listening to them and dreaming of one day being on the sidelines of their high school football games, cheering and promoting their school.

On game day, everyone met at Memorial Stadium in Wichita Falls. The coaches had worked very hard to make sure everyone knew their responsibilities and watched with pride as the cheerleaders carried them out. Pictures were taken, with parents asking for the girls to pose with their daughters. The high school cheerleaders took turns watching the field to make sure the little ones didn’t get run over, while the rest of them cheered. The little girls cheered on the sidelines with the cheerleaders for the first half of the game, and at halftime, went onto the field and performed three cheers they had learned.

The crowd really enjoyed the addition of the Pee Wee Cheerleaders, and after halftime families came down to the sidelines and picked up their little ones. Parents interacted with the high school girls, showing their appreciation for the work they had done and the time they had spent with their daughters. That, in turn, created a noticeable feeling of accomplishment and service among the high school girls. It was a wonderful experience for everyone involved.

After the game, the coaches discussed what went well and highlighted some areas that could be done better next year. For example, one of the things we didn’t think about was how the little girls would react to the mascots. It took a little coaxing and then showing them it was a person inside of the mascot uniform, and all was OK. Before long they all wanted their pictures taken with the mascots; however, next year we will address that during the camp.

The profit from the Oil Bowl this year was about $20,000 – most in the history of the event. The cheerleaders were so excited to hear that and to know that their efforts had been a part of this success. Plans for next year are already being made, with the goal of greatly increasing attendance at the camp, and to do even more outreach and service for the Shriners and others in our community.

Lloydeane Thompson is a paraprofessional at City View Junior/Senior High School in Wichita Falls, Texas, where she has been the cheer coach for the junior high and varsity cheerleaders for the past three years. Her other responsibilities include working with the PALs, and the UIL Academic Teams.