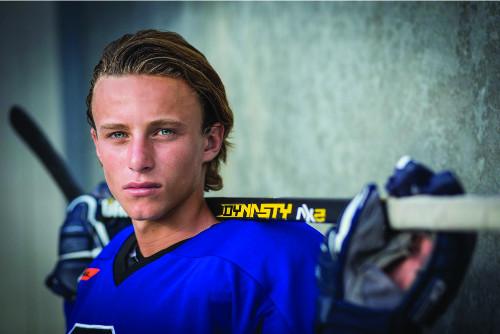 In today's high schools, multi-sport athletes are becoming less common as sport specialization is seen by some as the key to success, but Grayson Lyman is bucking the trend. In his four years at La Jolla (California) Country Day School, Lyman earned an unheard-of 15 letters across six varsity sports. He also participated in ice hockey and surfing as club sports.

Lyman first started playing sports after attending a YMCA camp when he was four years old. At seven, he started playing soccer and hockey for local clubs, something he never stopped doing. However, the now 6-foot-1, 150-pound Lyman is young for his grade, and as a result was often one of the smallest on the team. In fact, as a freshman at Country Day, he was just 5-foot-2 and 84 pounds.

“I wasn’t even big enough to be the water boy,” Lyman said.

Despite his small stature, Lyman began his high school career like many other eager young athletes, playing football, soccer, roller hockey and baseball. Sure, that made him busier than the average high school student, but nothing unusual. However, the relentless Lyman was hungry for more of the high school experience.

With that mindset, Lyman added track to his list of sports in his junior year to stay in shape for soccer.

In his senior year, while most of his classmates were suffering from “senioritis,” Lyman joined the cross country team, despite its conflict with football (in which he is no slouch, at one point being ranked as one of the top high school placekickers in the nation, and having received numerous offers to kick in college). In total, Lyman would letter in all six varsity sports he participated in during his senior year: football, soccer, roller hockey, track, cross country and ice hockey, which gained varsity status last year.

Lyman is not just an average competitor either. Despite his heavy time commitments, he still found the energy to be good enough to earn all-league honors in cross country, soccer and roller hockey.

With whatever extra time he had, Lyman even got involved in other school organizations, such as Country Day’s Christian Club. He also was a member of the community service board, and was tasked with leading its sports events, such as a flag football event for children with special needs.

And to add to his impressive list of accomplishments, Lyman is a true student-athlete. He graduated from Country Day in the top 10 percent of his class with a GPA just shy of 4.5, and will attend UCLA this fall to major in economics with a minor in Spanish. This mounting list of accomplishments begs the question, how did he do it? It’s all about time prioritization and time management, says Lyman. 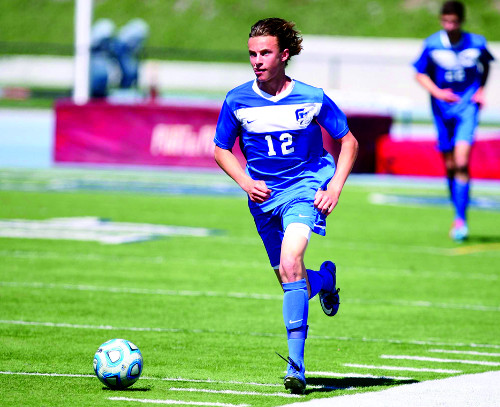 “Academics come first; family comes second, and then sports,” Lyman said. “I tried to use every second wisely, and I always found time that I could be using to do something more productive. I made sure my homework was done by spending my free period in the library, even though most kids were outside.”

Still, such a loaded schedule requires some additional help, even for a student-athlete as disciplined as Lyman, and he credits his support system for making his accomplishments possible.

Lyman’s after-school practices with club sports like soccer were often 30 minutes away. Although he now drives himself, his mom was the one making those trips with him through California traffic multiple times a week during his freshman year.

“I couldn’t have done any of this without my mom; she has always been there for me and she always will be.”

Lyman is also grateful for his understanding teachers at Country Day, many of whom are also coaches, especially Dan Wagner, Lyman’s roller hockey coach for three years and ice hockey coach last year.

“Coach Dan was always available as someone to talk to and give me advice.”

A true sport junkie, Lyman says he has absolutely no regrets about committing so much time to sports in high school, and that he did everything he wanted to do. However, that doesn’t mean his heavy schedule didn’t come without its fair share of challenges.

“There were times when I would question myself, but I was always reminded of how much I enjoyed it,” Lyman said. “I can’t imagine my life without playing sports in high school.”

Nevertheless, there was one instance in which Lyman relented to the pressure of his schedule. He quit the football team for one day last season, but said he did so for the wrong reasons.

“I couldn’t even look myself in the mirror the next morning I was so ashamed. I went back to my coach that day and I was lucky enough to get my spot back.”

“Don’t fall into the one sport trap. If you’re thinking about playing more than one sport, just do it. You’ll never know if you don’t try. If you think it will be too hard then you’ve already defeated yourself.”

Lyman himself planned on playing just soccer after his sophomore year, but he couldn’t bring himself to quit everything else. Now, he believes playing more than one sport has made him a more complete athlete.

“Every sport I’ve played has taught me something different and made me better in another sport,” Lyman said. “Most coaches I know realize that playing another sport makes you a better athlete.”

As for his future in athletics, Lyman will turn his attention fully to soccer by joining a club team this fall, using his remaining year of club eligibility. A center back who models his game after Real Madrid and Spanish international defender Sergio Ramos, Lyman hopes to walk on for the defending national runner-up Bruins in the future. But, of course, the lure of other sports is always tempting this young star.

“If there’s a way I’ll do it,” Lyman said when asked about whether or not he would play other club sports in college. “I will keep sports in my life no matter what; I just can’t get enough.”

Brandon Jones was a summer intern in the NFHS Publications and Communications Department and is a junior at Indiana University in Bloomington.