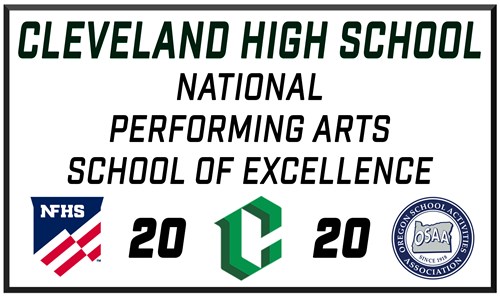 The National Federation of State High School Associations (NFHS) has chosen Portland (Oregon) Cleveland High School (CHS) as the 2020 NFHS Performing Arts School of Excellence. Cleveland becomes the fifth annual winner of the award and the first recipient based in an urban setting.

Every fall, one high school in the United States receives the NFHS Performing Arts School of Excellence distinction in recognition of its exemplary commitment to the performing arts. The award is presented each year in October to celebrate National High School Activities Month and National Performing Arts Activities Week (October 11-17) to remind students, parents, coaches, administrators and others in communities across the country about the values and benefits of high school activity programs.

Dr. James Weaver, NFHS director of performing arts and sports, will present the award to Jo Ann Wadkins, CHS principal, and Kellie Cook, CHS athletic/activities director, on Thursday, October 8, during a special ceremony at the school.

“This award is a way to recognize the great performing arts programs around the country,” Weaver said. “The award can excite programs to grow, and we can continue to highlight the importance of performing arts within high schools. Cleveland High School has a long history of excelling at the top levels of performing arts in the state of Oregon and Section 8, and we are excited to celebrate its success.”

Cleveland’s dedication to growing and improving its arts programs is certainly evident in its lengthy list of achievements. The cornerstone of that success, however, is the conviction of its administrators and activities directors and coaches, who possess a deep understanding of the value students reap from arts participation.

“We know the arts enrich our lives and play a vital role in the culture of our school,” said Wadkins. “We are proud of the dedication of our coaches who inspire and support our students. To see our students perform is to get a glimpse of the spirit of Cleveland High School.”

“We want to thank the National Federation of State High School Associations for recognizing the Cleveland High School performing arts programs with this award of excellence,” said Guadalupe Guerrero, Superintendent of Portland Public Schools. “We are really proud of our Cleveland students and educators and remain committed to ensuring access to high quality arts education for every student across all of our schools in Portland.”

CHS’ tradition of performing arts prowess was established in the 1990s when the school’s dance and choir programs rose to prominence in the Oregon School Activities Association (OSAA).

The dance team was nothing short of dominant throughout the decade, winning back-to-back state championships in 1990 (Class 3A Large) and 1991 (Class 4A Large) and again in 1996 (4A Large) and 1997 (4A Large), along with runner-up finishes in 1992 (4A Large) and 1998 (3A Large). Following an elevation to Class 5A Large, the program finished second again in 2010 and claimed a pair of fifth-place finishes in 2011 (Class 6A/5A) and 2015 (Class 6A Intermediate). Coaches Coral Burgess and Ana Rieser currently lead Cleveland’s dance program.

The choir matched the dance team’s second-place finish in 1992 (Class 4A) and then won a championship of its own in 1997 (Class 4A), but that was only the beginning. In 2006, despite having no middle school feeder programs, Cleveland’s choir began a stretch in which it won five OSAA championships in seven years, with the last four titles – 2007, 2008, 2010 and 2012 – coming in Class 5A. The program came up just short of two additional championships around that time, taking second place in 2009 and 2013.

Now under the direction of Allison Bassett, the CHS choir’s most recent years have included appearances at three of the past four state showcases, highlighted by a second-place result in 2019. The choir has also participated in many community events, helped raise money for a variety of causes, and recently collaborated with another area high school to focus on musical works that addressed social issues and displaced peoples around the world.

The 2010s also signaled the emergence of Cleveland’s speech and debate, band, jazz band and chamber music programs, and produced a number of top finishes at state- and league-level solo events.

The CHS speech and debate program, coached by Patrick Gonzales, CHS was crowned a Portland Interscholastic League (PIL) district champion each year from 2010 to 2016, and again in 2018 after a second-place finish in 2017. The program’s state-level resume is even more impressive, having taken home an OSAA state championship or state runner-up in each of the past nine seasons, including three titles each in Class 5A and Class 6A.

CHS performing arts students also perform well in the classroom, as the school has posted strong finishes across multiple categories of the OSAA’s Academic All-State competition.

"The performing arts are an integral part of the OSAA and its member schools,” said Peter Weber, executive director of the OSAA. “Having Cleveland High School recognized nationally by the NFHS is a testament to the impact that the performing arts have on students throughout our state."

The four past recipients of the NFHS Performing Arts School of Excellence award include:

To see a video recap of the celebration click here.

2019-20 National Coaches of the Year Selected by NFHS Coaches Associa.