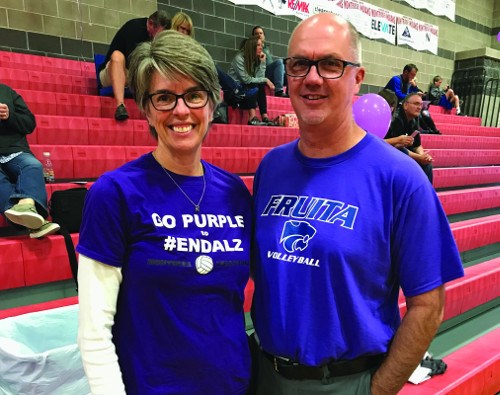 It was two years ago this past December when Shane Forrest, Montrose (Colorado) High School volleyball coach, received the life-altering news. After 20 years on the sidelines and six trips to the Colorado High School Activities Association (CHSAA) state volleyball tournament, including a 2014 final four appearance, Forrest made the difficult decision to step away from the game.

Her brother had been diagnosed with early onset Alzheimer’s at the age of 56. The time Forrest spent in the gym, on buses and at fundraising events were now moments she could have with her brother.

Forrest knew that the administration and coaching staff would be flexible, but giving just part of herself to the program was not good enough for her own standards.

“It was a really hard decision and I think that the administration would have worked with me to be more flexible, but I just did not feel that that was the right decision – to only give part of myself to the program,” Forrest said.

Forrest selflessly walked away from her team and the game that had served as her consistent stress reliever for much of her life and made the five-hour drive from Montrose to Denver to be with her brother.

“Resigning allowed me to make trips to Denver when I wanted to or have the freedom to spend more time with him and make myself more available to him and his family when I wanted to be,” Forrest said.

“Shane’s response to her brother’s diagnosis was nothing more than a tangible example of what she strives to teach her athletes. Go get what is important to you. Do what you know is right. Don’t be afraid to embrace your passion and share it with others,” Voehringer said. “On a much simpler level, her decision to step away from the game showed what is important – family. We have to take care of each other.”

Forrest’s brother and his family moved back to Wisconsin after the 2017 season, so Forrest seamlessly stepped back in as the Montrose volleyball coach.

“I missed it. I did miss it. I love it. I have a passion for coaching volleyball. I love teaching the game to players, and I love being in the gym. I missed being in the gym and that connection with the players,” Forrest said.

Returning to the sidelines after a year dedicated to her family, Forrest had found a new perspective and deeper understanding for why she coaches.

“Through this I was able to gain a new perspective for myself, but also share that perspective with the players. There are things that are more important than volleyball and sometimes we have to direct our attention to those things,” Forrest said.

Forrest recalled a practice this past year in which a friend and former Montrose volleyball player stopped by at the start of practice. After 25 minutes of catching up with her friend, Forrest returned to her team waiting for her to begin practice. Forrest apologized for the delayed start to practice and explained to her team that her friend was battling cancer.

In addition to Forrest’s deeper understanding of the importance of making real human connections, she has also found a more relaxed side to herself.

“On the surface, she’s a bit more laid back and doesn’t let the little things agitate her,” Voehringer said.

The moment during the 2018 season that really opened Forrest’s eyes to the love and support she had from the Colorado volleyball community was during the Go Purple game organized by the Montrose volleyball parents, players and coaches.

“I had no idea Fruita (Colorado) Monument would be showing up in purple shirts in support of our cause as well. That was very emotional and touching to me that my rival, yet coaching friend, Bob Richardson, did that for us and for my family and for our volleyball program,” Forrest said. 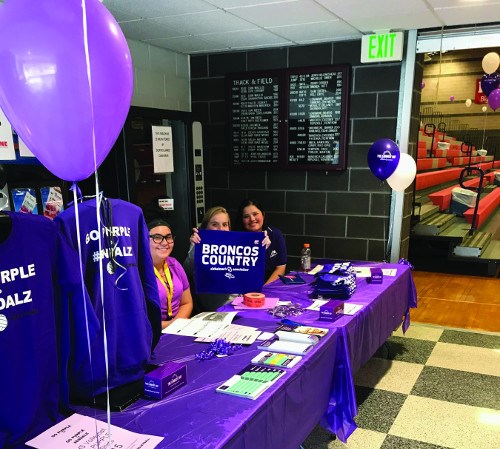 The Go Purple game was a community effort that Forrest believes is unique to the high school experience.

“High school is different than club – a community – people with common backgrounds pulling together,” Forrest said. “Parents made banners and posters and we reached out to the Alzheimer’s association, and they provided materials and flags and a coach reached out to the Denver Broncos and they sent purple rally towels and wristbands. In our high school the parents, players and coaches pulled together to make this a really big deal.”

“What I have learned about Alzheimer’s is there is no cure and it does affect people more than breast cancer and prostate cancer combined,” Forrest said. “My focus is going to continue to get the word out about that and continue to raise funds in any way that I can.”

Forrest also sees her role as an educator and coach to set an example for her student-athletes to do the same. Find a cause and get involved.

“Just do it. You know we can sit back and let things happen to us and watch other people raise money or initiate events for important causes or just do it,” Forrest said. “When you have the opportunity or you have the forum to be able to advocate for something that is important to you, just do it. Don’t wait for other people to do it.”

To learn more about Alzheimer’s, get involved in raising awareness or to donate, visit the Alzheimer’s association at www.alz.org.