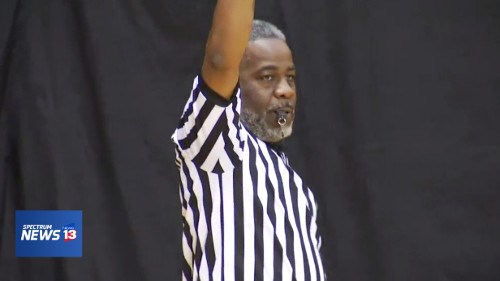 It’s tough being a referee at any level. Your attention to detail has to be spot on, there might be some taunting from fans and you are caught inside the sideline of pretty competitive games. For John Thomas, it’s something he lives for.  Despina Barton introduces us to a Florida official who makes sure he uses all of his senses when making the big calls.

It can be pretty intimidating walking into a busy AAU tournament at the ESPN Wide World of Sports Complex at Disney World. Team’s shuffle  in and out, there are loud fans in the stands and a lot of basketball games going on all at once.

But for John Thomas, the noise never gets to him — because he’s deaf.

Thomas has always found a way to be around the game, from his early playing days in New York to coaching and now officiating in Central Florida.

This, though, was a new role he sought after realizing a few years back he couldn’t keep pace with the guys at the gym anymore.

“Because of my health, the current shape that I was in, I didn’t want to be a vegetable sitting at home on the couch so I was searching on the website and I came across Central Florida Officiating Association, and I joined.”

Joining was easy three years ago. He already had the basketball IQ and background. The challenge for the 53-year-old came with the training.

“I was the only deaf person. There was no interpreter, and there was nothing. So I asked my partner, ‘Hey do you mind writing-taking notes for me?’ as I learned my way through training,” Thomas explained.

Now, Thomas has an interpreter, Chris Bahl, and is thriving in a business he didn’t think much about when he was younger.