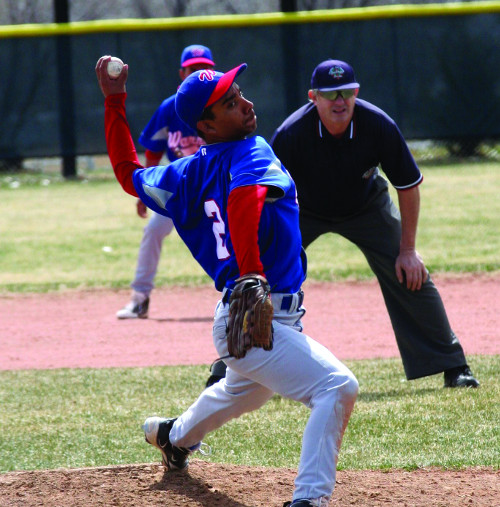 With the health of young baseball pitchers receiving more scrutiny than ever, the meeting of some of the leading experts on baseball overuse injuries came at a crucial time, said Elliot Hopkins, NFHS director of sports and student services and liaison to the NFHS Baseball Rules Committee.

“Overuse injuries in high school baseball are a growing concern for everyone,” Hopkins said. “Our student-athletes are pitching too hard and too often without enough rest. We are seeing a lot of pitchers who throw for multiple teams at the same time and end up with higher pitch counts than even Major League pitchers.”

Among the topics discussed at the meeting were the growing trends of overuse injuries in young pitchers, injury prevention strategies, as well as current and future pitching rules being implemented by state associations to minimize risk to student-athletes.

One especially alarming trend that has emerged in recent years is that of adolescent pitchers undergoing ulnar collateral ligament (UCL) reconstruction, also known as Tommy John surgery. According to data from the Andrews Sports Medicine and Orthopedic Center, the percentage of Tommy John surgeries done on adolescents nearly quadrupled from 1998 to 2010.

According to the “Pitch Smart” initiative launched last year by Major League Baseball and USA Baseball, the arm injuries that lead to surgery are caused by a variety of risk factors. They include pitching while fatigued, not getting adequate rest in between games or between seasons, and even throwing breaking pitches at a young age. “Pitch Smart” recommends that players take at least four months off from competitive pitching every year, at least two of them being continuous, and to avoid using breaking pitches until age 13 or 14.

When it comes to addressing these risk factors with regulations at the state level, many member associations have restrictions on either the amount of innings, outs or pitches that a player can throw over a specific period of time. For example, the California Interscholastic Federation has stipulated that a pitcher can pitch a maximum of 30 outs in a calendar week. Other states have enacted rest requirements, such as the Alabama High School Athletic Association, which requires three days of rest if a pitcher throws the seven inning maximum in one day.

On the national level, the NFHS is determined to address this issue and potentially come up with regulations to help minimize risk to high school pitchers, Hopkins said.

“This was the first time our SMAC met with an outside group to discuss this important subject,” Hopkins said. “A lot of crucial information was shared between all parties, and the symposium was well-received overall. The issue of overuse injuries in high school baseball will certainly be something the SMAC will work on in the future.”

Brandon Jones was a summer intern in the NFHS Publications and Communications Department and is a junior at Indiana University in Bloomington.