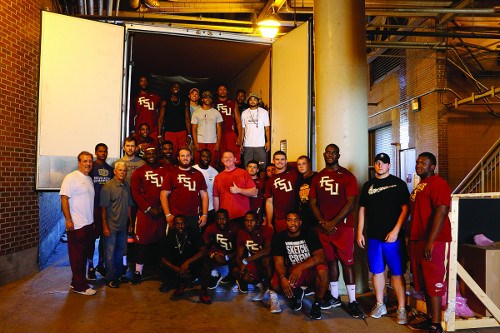 In the wake of this summer’s catastrophic flooding that left 23 dead and much of central West Virginia in a dilapidated state, the generous actions of a few hometown football heroes have provided hope to some schools facing fall seasons in doubt.

“Football was such an important part of my childhood in West Virginia, and to see the devastation the flooding caused, and how it threatened so many high school football teams, we wanted to find a way to help,” Saban said. “I know how important football was to my development and we wanted to help find a way it could continue to impact youth in West Virginia. We were pleased and happy with the response throughout Alabama and the country and look forward to seeing those affected high schools back on the football field.”

Flooding proved not only deadly but historic for the Mountain State on June 23. Considered a “one-in-a-thousand-year event” by the National Weather Service, the single-day rainfall in West Virginia equaled one-quarter of its yearly rainfall total. On the morning of June 24, Kanawha County’s Elk River crested at 33.37 feet – marking its highest in 125 years of records. Greenbrier County, located a little more than 100 miles east of Charleston, received more than 10 inches of rain and as much as seven inches in a three-hour span.

Tim Meyer, the Herbert Hoover (Clendenin) High School football head coach, didn’t realize the rain’s intensity until players’ calls began to trickle in during the afternoon. “I started getting all of these kids calling me up, telling me how they were getting flooded in and they wouldn’t be able to get to practice,” Meyer said. “We went ahead and made the decision to cancel our non-contact practice. I sent a text out to all of the kids. As a coach, you always have to figure you’re not going to get in touch with all of the kids so I drove on up to the school to see if I could cut off any of those kids and get them turned back around.” 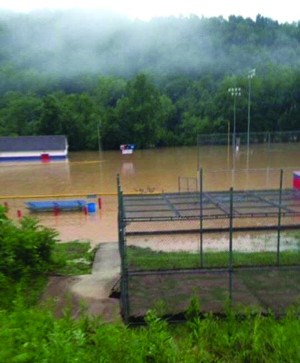 The next day, Meyer, his staff and a group of volunteers visited the school and facilities to evaluate the aftermath. What they discovered was a gutted fieldhouse and a water-logged football field that, in time, could be repaired. Meyer said helmets and coaches’ headsets were all that could be salvaged from the fieldhouse. Just as the athletic facilities had been hit, so had the high school. The Kanawha County Board of Education informed local residents during a July meeting that a new high school is expected to be built within two to three years, with the Federal Emergency Management Agency (FEMA) covering 75-90 percent of the costs.

“Everything else basically had to get thrown away. We had an outstanding weight room, and pretty much all of the weight equipment has been condemned,” Meyer said. “Our block and sled had its pads taken off, and it was picked up and just floated on down the river; all of our hand shields were kept in a storage building next to the practice facility and it took it off the foundation and sent it down the river.”

Facing an uphill battle with football opening on August 1, Meyer and other local coaches caught a break when Fisher and his offensive line coach, Rick Trickett, presented a truckload of equipment to local programs at Clay County High School on July 13. In addition to significant contributions from West Virginia University and Marshall University, equipment from local schools and grants such as those from USA Football have gone toward getting teams the assistance they need.

“Once we were able to go up there and see the people and the devastation, it makes it all worth it,” Trickett said. “It’s really bad. That’s one of the things about the game of football, it brings everybody together. It doesn’t matter if you’re in California or Texas or wherever, it’s a tough man’s game. That’s why I like doing this – everybody up there is called ‘West Virginia tough’ and they are tough people and they’ll get through this. I’m just happy we were able to do something for them.”

Just down the road from Herbert Hoover, Elkview Middle School faced similar circumstances after being flooded by more than 18 inches of water and its football field by nearly 3 feet of water. Elkview Athletic Director Eddie Gray said the football team lost 38 pairs of shoulder pads, in addition to 20 archery targets, soccer goals and a volleyball net. Gray added that his team was fortunate that a Charleston-based dry-cleaning company offered to clean and sanitize the uniforms. 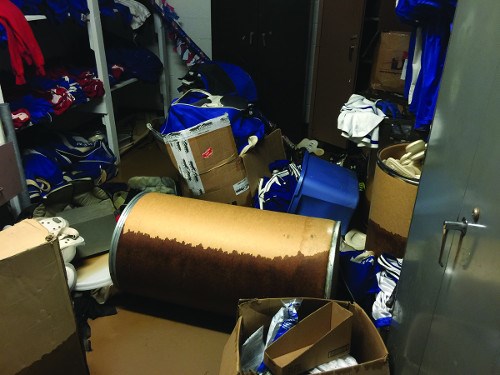 Herbert Hoover High School students joined Elkview Middle School students when school returned to session on August 10, attending class from noon until 4:30 p.m., while grades six through eight go from 7 a.m. to noon. High school students report to mobile classrooms, situated on the Elkview football field, in November after the field was damaged beyond repair during the flood. Although its school is closed, Herbert Hoover’s football field continues to play host to each school during the 2016 season, with Elkview having kicked off on September 1 and Herbert Hoover on September 9.

“My goal as athletic director is to help our kids get out and get involved in sports to get a sense of normalcy and get things rolling to the point they can enjoy time with their friends and not have to worry about what happened,” Gray said. “We want to get their mind off that as best we can. I know it was terrible but we need to do that and I think athletics will help us do that because they will be out there playing Thursday night with everyone cheering for them to help make them feel good.”

The high school students have provided additional guidance for the middle schoolers as well, Gray said. On August 14, the two programs strengthened their ties after being invited by the New Orleans Saints to the team’s training camp at The Greenbrier Resort.

“It’s kind of neat to see how people in West Virginia band together and they want to help do what they can,” Meyer said. “For such a catastrophic event, it’s great to see these people come together and work to make this season as normal as possible for these young men.”