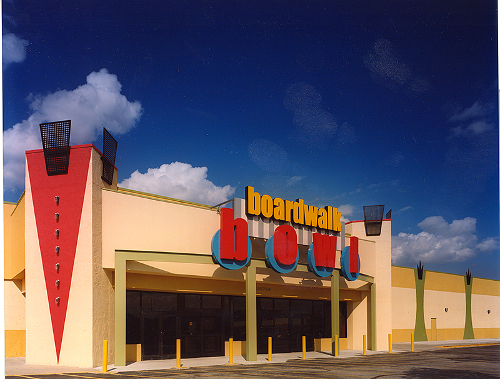 The bowling state tournament has been held at the same venue longer than any other FHSAA state championship. After being held at Kendall Lanes in Miami during its inaugural year of 2003, Boardwalk Bowl has been its home.

In terms of boys state team championships, Apopka (which has won the past two state titles), DeLand (which won the first two in 2003 and 2004), and Stuart Marin County are locked in a three-way tie with two championships apiece.

Meanwhile, DeLand leads the girls with three team state titles in 2004, 2005 and 2007. No other girls program has won more than once.

High school bowling got its start in Florida in the early 1960s and the Bowling Centers Association of Florida (BCAF) conducted a championship tournament beginning in 1970. Current BCAF Board of Directors member Dave Driscoll, who currently administers the FHSAA State Bowling Championships, recalls how the two organizations first collaborated.

“We (the BCAF) began to approach the FHSAA about adding bowling as a varsity sport and it came to fruition in 2003,” Driscoll recalled. “The first FHSAA bowling administrator, Paul McLaughlin, approached the BCAF for some assistance and I volunteered.”

Currently administering the sport for the FHSAA is Assistant Director of Athletics Will Adams, while FHSAA Public Relations Specialist Corey Sobers handles the tournament’s media. 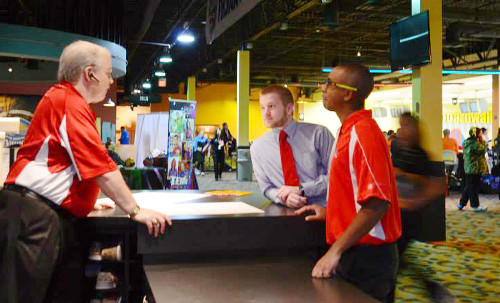 Shown above is Dave Driscoll, who administers the FHSAA State Bowling Championships; FHSAA Assistant Director of Athletics Will Adams, who is the FHSAA administrator of the event; and FHSAA Public Relations Specialist Corey Sobers, who handles the tournament’s media

“The best part about Boardwalk Bowl with regard to our tournament is the sheer number of lanes it has,” Adams said. “With 80 lanes, it is one of the largest centers in the Southeast and has ample room for us to run both the boys and girls tournaments simultaneously. By running both tournaments at the same time, we are able to create an electric environment that you really have to see to believe.

“Leading up to my first tournament, I had some previous experience with bowling centers and various leagues, but wasn’t expecting the athletes and spectators to have as much energy as they did. I think a lot of that energy and the amplified level of excitement stems from the environment we can create by hosting the tournament at such a large facility.

“One of the other benefits of hosting the tournament at Boardwalk Bowl is getting to work with its staff. You never know how hard it’s going to be for a facility to handle all the last-minute changes that take place when hosting a sporting event, but the staff at Boardwalk is very accommodating and allows me to focus on interacting with coaches and athletes - rather than worry about all the behind-the-scenes details. All in all, Boardwalk is a great facility and I enjoy getting to spend a few days there every year running our tournament.”

One of the unique aspects of the sport of bowling is that it doesn’t necessarily require that its participants have great size or other physical gifts. Rather, consistent with the basic precepts of high school sports, it is more “inclusive and open to the masses” in terms of the student-athletes it attracts.

One such bowler is senior Joshua Ramos of Oviedo High School. Under the direction of coach Pat Costello, who is a member of the halls of fame of both the United States Bowling Congress and the Professional Women’s Bowling Association, Ramos goes a compact 5-foot-7 and 117 pounds. However, that lack of bulk doesn’t seem to have restricted Ramos as his best sanctioned game is a 299 and his best sanctioned series is a 737. 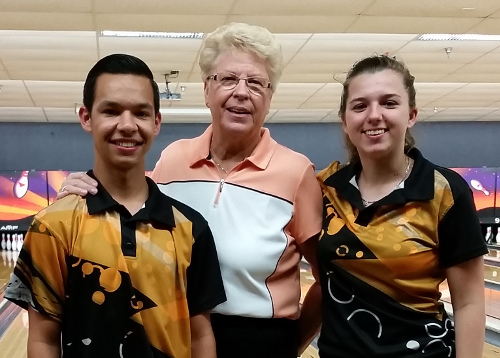 “My thought on that is it doesn’t matter what your body or build is,” Ramos said. “You can play any sport you want to or aspire to. Balance at the foul line is my greatest strength. I describe my form as improving every time I bowl.

“I got my start in bowling four years ago when I realized that baseball wasn’t my passion anymore and that bowling was. None of my family members have bowled, so I am the first to have taken bowling seriously and to the next level.

“From participating in bowling, I have gained a whole new perspective of sports and strategy. I am still learning leadership, because as a senior on the team it’s my responsibility to keep everyone on the team focused on the things they need to do. And I have also learned that teamwork has a huge effect on you personally.

“In addition, bowling has allowed me to create a lot of new friends that I would never have had. My greatest memory in bowling was when I shot my 299 game and left a seven pin.”

On the girls side, Oviedo High School junior Katelyn Jones has rolled a high game of 298 and a high series of 703, and helped lead the squad to the FHSAA state championship as a mere freshman.

“I was in the lineup that entire day, so I really did get to be part of winning the title,” Jones said. “Last year, I qualified for the FHSAA Girls Individuals, but was eliminated in the third round.

“I started bowling about five years ago. I got into the sport because my parents were longtime bowlers and they used to take me with them.

“As a bowler, I am very versatile, meaning I can play different parts of the lane. I bowl one-handed with a very traditional form, but technically I’m called a ‘tweener’ - which means that I’m not a straight bowler, but I also don’t have a huge hook.

“Bowling is a cool sport because it provides the same challenges to anyone who plays it. It levels that playing field. Everyone is faced with the same obstacles, so no matter your size or weight, it’s equal.”

According to Costello, both bowlers possess great skills but also project to continue to improve. 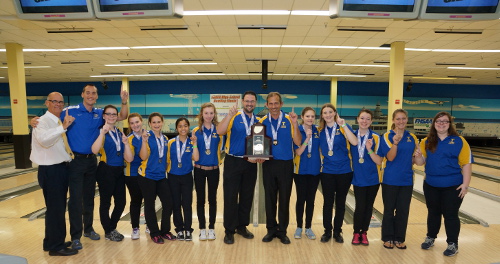 “Joshua has really stepped up and has taken his game to the next level,” Costello said. “He is learning about perfect practice and his mental approach to the game, and how important those tools are.

“Katelyn’s strength is her desire to be the best she can be for her team. She works hard, continues to learn and improve every day, and helps her teammates with their games.”

As with any high school state tournament, a great deal of preparation goes into every FHSAA state bowling championship.

“Prior to the tournament, I work closely with FHSAA to ensure that the rules and guidelines that govern the sport of bowling at the high school level are such that they meld the FHSAA guidelines and traditional guidelines while maintaining the spirit of the rules outlined by the United States Bowling Congress,” Driscoll said. “In addition, I am in contact with Boardwalk Bowl staff and management regarding the needs required to run this tournament efficiently and successfully. We conduct a meeting each year prior to the tournament to review FHSAA requirements and to finalize the logistics of the scheduling, scoring and facility. The night before the tournament, I conduct a coaches meeting to review rules, guidelines and scorekeeping procedures.

“Boardwalk Entertainment Center is a unique center that is an excellent host for the FHSAA Bowling State Championships. The facility has 102,000 square feet, which provides plenty of room for the spectators. Last year, there were 1,400 paid admissions for the two-day event. I have always felt that a championship event requires a championship venue; Boardwalk provides that for us.”

The Oviedo trio agrees with Driscoll’s opinion that Boardwalk is an excellent facility in which to hold the FHSAA state bowling tournament.

“Boardwalk is a great bowling facility, especially for large tournaments like the FHSAA state tournament because it has so many lanes and so much space,” Jones opined. “It has a lot to offer adults and kids alike. For example, it has a comedy club for the adults and an arcade for the little ones.”

“I think Boardwalk is a beautiful, great-big facility that is great for bowlers from everywhere,” Ramos said. “It’s cool how it has a great pro shop and how the lanes are on both sides of the house.”

“I worked for Boardwalk (Aloma Bowling Centers) for more than 17 years and as the key person for the state championships being held there,” Costello began. “In that capacity, I worked very closely with the high schools that bowled in our center and got them to host the event.

“Dave Driscoll does an outstanding job and basically runs the entire event. He really takes the weight off the FHSAA in running it. Having 80 lanes full of high school bowlers and coaches … bleachers full of parents, families and school officials is something very special and exciting. It’s a loud event with lots of cheering.”