Football Players with Improper Equipment Will Be Removed for One Down 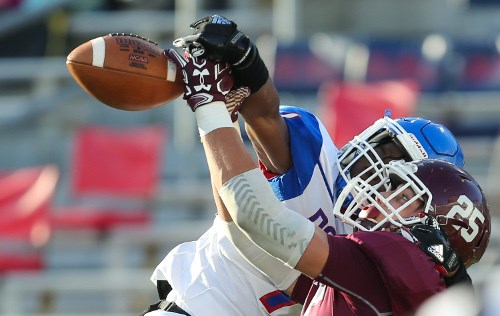 Players in high school football who are detected with missing or improperly worn equipment during playing action will be removed from the game for at least one down, unless the improper equipment is directly attributable to a foul by the opponent.

This revision in Rule 1-5-5 and other related rules was one of five rules changes for the 2018 season recommended by the National Federation of State High School Associations (NFHS) Football Rules Committee at its January 19-21 meeting in Indianapolis. All changes were subsequently approved by the NFHS Board of Directors.

Rule 1-5-5 also states that if the player is wearing otherwise legal equipment in an illegal manner, the participant must also be replaced for one down. If proper and legal equipment has become improperly worn through use during the game, and prompt repair does not delay the ready-for-play signal for more than 25 seconds, the repair can be made without replacing the player for one down.

“I commend the entire football rules committee for its thoroughness and focus on the state of the game of football,” said Todd Tharp, chair of the NFHS Football Rules Committee and assistant director of the Iowa High School Athletic Association. “The committee recognizes that the state of high school football focuses on risk minimization and the responsibility that coaches, players and game officials play in continuing to protect our student-athletes. By emphasizing that the coach is ultimately responsible for assuring his players are using legal equipment by issuing an unsportsmanlike conduct penalty for violations and that players will be removed for using legal equipment in an illegal manner, the committee continues to focus on minimizing risk for all players.”

Bob Colgate, NFHS director of sports and sports medicine and liaison to the NFHS Football Rules Committee, said this additional option was approved by the committee in an effort to reduce re-kicks, further minimize risks and ensure that appropriate penalties are in place for all fouls.

“The ability to ‘tack on’ penalty yardage on free kicks will potentially reduce the amount of repeated free kicks,” Tharp said. “In addition, this rule change is consistent with NFHS rules that no foul should go unpenalized.”

The committee also changed the signal for free-kick infractions, other than encroachment of the neutral zone, from Signal 18 to Signal 19.

A complete listing of the football rules changes will be available on the NFHS website at www.nfhs.org. Click on “Activities & Sports” at the top of the home page and select “Football.”