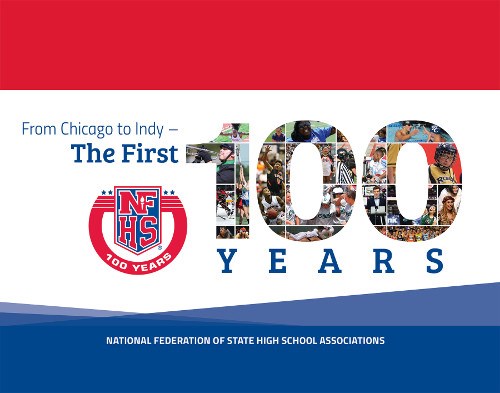 As a culmination of its yearlong Centennial celebration, the National Federation of State High School Associations (NFHS) has published a hardbound book on the first 100 years of the national leadership organization for high school sports and performing arts programs.

“From Chicago to Indy – The First 100 Years” traces the early years of the NFHS in downtown Chicago to its current home in Indianapolis, which includes stops in Elgin, Illinois, and Kansas City, Missouri, along the way.

The commemorative book also contains a listing of the “Top 20 Success Stories of the First 100 Years,” led by Executive Director C. W. Whitten’s leadership in 1930 in stopping the National Interscholastic Basketball Tournament run by Amos Alonzo Stagg, which marked the end of the involvement of colleges and universities in running high school sports.

The commemorative book was written by Bruce Howard, NFHS director of publications and communications, and designed by Kim Vogel, NFHS senior graphic designer. The book was printed by Link Printing Services, LLC, of Indianapolis.

“From Chicago to Indy – The First 100 Years” is available for $29.95 (plus shipping and handling) through the NFHS Order Department at www.NFHS.com.