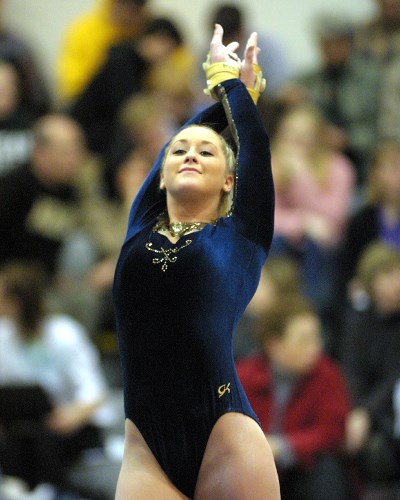 The National Federation of State High School Associations (NFHS) Girls Gymnastics Rules Committee, at its recent meeting in Indianapolis, focused on adding clarity to the rules for a sport ever-adapting to new trends.

Among the new rules that will take effect for the 2016-17 season are ones that will refine scoring and identify how high school gymnasts can incorporate new elements into their routines. The recommended rules changes were subsequently approved by the NFHS Board of Directors.

Several options for series were eliminated to remove value adding from scoring.

“You’re awarding extra credit for putting two elements together in a series and that extra credit really is a function of the bonus category, so that’s why the committee eliminated a lot of the rule references to series,” said Becky Oakes, NFHS director of sports and liaison to the Girls Gymnastics Rules Committee.

An example of this change in Rule 1 is the definition of an acro pass, which now consists of two, not three, “directly connected acro elements.” Part of the rationale now also includes language that is tied into other events requiring elements of value.

“This change very concisely eliminates some inconsistency with the wording of value part credit as it currently exists,” Oakes said.

Another change was made to Rule 8-3-3c, which impacts the Artistry category where gymnasts are not as likely to perform a routine featuring originality.

Oakes said the intent for the rule change is to reduce subjectivity in scoring. Rules 9-3-3c, 4-1-2C and 4-1-2D are each impacted by the change, in addition to scoresheets.

The committee introduced several elements in an effort to “keep up with the current trends and elements for high school gymnasts,” including No. 6.503, a round-off, flic-flac with a 180-degree turn on – salto forward tucked off (Ivantcheva) 10.0, located in Rule 6-6-6.

Also added was a 0.3 deduction for routines performed on bars and beams that do not finish with a dismount. The new rule, 7-3-6a, counts a deduction when a gymnast intentionally terminates a routine, performs a valueless dismount, falls without starting a dismount, or performs a dismount that fails to result with the gymnast first landing on the bottom of her feet.

“The majority of rule changes were to add clarity to existing rules for more consistent application,” Oakes said.

A complete listing of all rules changes will be available on the NFHS website at www.nfhs.org. Click on “Activities & Sports” at the top of the home page, and select “Gymnastics – Girls.”