This particular funding crunch was not a first for the town; however, it was its most challenging to date.

In a combined effort, the Douglas High School Athletic Boosters and a newly founded athletic fundraising committee raised nearly $100,000 to once again revive the school’s interscholastic activities. Community donations – like the $20,000 donated by Guaranteed Builders Inc. – contributed to much of the lofty goal. The remainder of the funds came through youth baseball and soccer camps, a PTO-sponsored color run, a silent auction at the Douglas Octoberfest, and selling goods like winter stocking caps.

“We would’ve been up the creek without a paddle without the support of the boosters in the community,” said Norman Yvon, superintendent of the Douglas Public Schools District. “We were in a position where we had to cut quite a bit from the school budget. The decisions came down to cutting money for athletics and extracurricular activities or losing an additional four or five teachers, making a very significant impact on our academic program.”

The town’s budget shortfalls have been ongoing for a number of years, according to Douglas High School Principal Kevin Maines. Without much industry present in the area, revenue is lacking and the town has to turn to its homeowners to keep it thriving. Maines said as a result of the budget issues, everyone from the police department to public works has had to “tighten their belts” and make critical cuts to align with Douglas’ financial plan.

The community’s fundraising efforts have done more than ensure that players get to continue to compete. The money from the donations have also covered costs associated with awards and travel from game to game. Maines said the boosters have “been an important support system for our programs.” 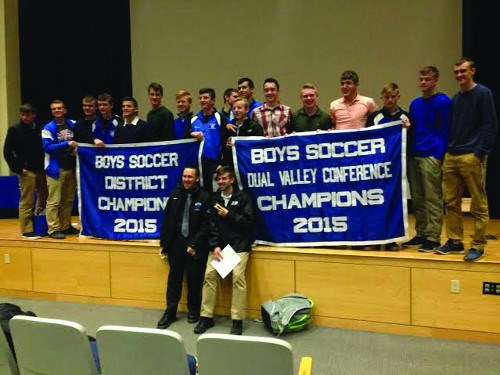 Without the revival of the education-based programs, occurrences such as competing for a state championship or performing in state-of-the-art facilities could not have taken place. In November, the Douglas boys soccer team fell in a penalty shootout during its Division III state championship matchup. That very week, the school’s Chorus and Blue Light Special performed at the world-renowned Mechanics Hall in Worcester, Massachussetts. Earlier that season, four cross country runners qualified and competed in the state meet.

“This was certainly the combined effort of a lot of people who were committed to keeping the programs up and running, and our students are the direct beneficiaries of that,” Maines said. “We couldn’t be happier about it because you only get so many opportunities to compete at a state-championship level and those students wouldn’t have had it.”

During each of the past six years, Maines and the school district have looked in numerous directions to limit cuts. Maines said the attempt to stave off the shortfall has come by “cutting teachers, consolidating bus routes, and trying to be creative and not impact teachers in programs.”

“We’ve done all of that and the shortfall continues to be significant enough though we’ve had to go beyond those types of cost measures and actually get into what I think everyone would agree are significant reductions that are having an impact on teaching staff and education-based programs across the district,” Maines said.

Additional cost-saving measures were taken two years ago to offset the cost of running the school’s education-based programs by implementing user fees for those activities. In recent years, parents have seen those fees rise from $125 to $150 for athletics and to $50 for the band and choral programs.

“This year, as the cuts became more significant we did the same thing by increasing some of the user fees. For example, our sports fee went from $150 to $300 per season with no caps,” Maines said. “We used to have caps on our user fees. In other words, if you had two or three kids in the school district, you weren’t paying full for all three seasons. We had to eliminate the caps as well this year and what that did was generate a little bit more money in the revolving account to offset the cost of offering these programs.” 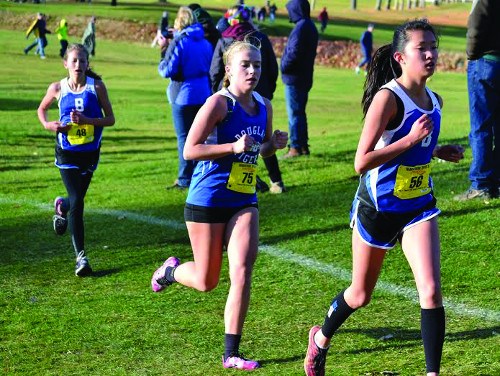 Maines said the importance of these programs can’t be understated for the community. In a school of its size with 410 students in grades 9-12, it’s not uncommon for students to be involved with more than one activity. Maines estimated that somewhere between 50 and 60 percent of the student body is involved with multiple education-based programs, something he believes is vital for a young adult’s development.
The town of Douglas and its 8,601 residents are situated along the borders of Connecticut and Rhode Island. For its youth, there’s not much to offer outside of school.

“We are a small, relatively rural town. There’s no McDonald’s right around the corner. There’s no movie theater, no bowling alley or that type of thing,” Yvon said. “There’s no place for our young adults to have a social life outside of home. Things like the basketball game, soccer game, practice and rehearsal are not only a part of their academic growth and physical growth, but they’re also a big piece of where they get to see their friends and develop a greater sense of community.”

In what Yvon called a “herculean effort,” the concept of community and school pride showed through to provide Douglas’ youth an outlet to grow.