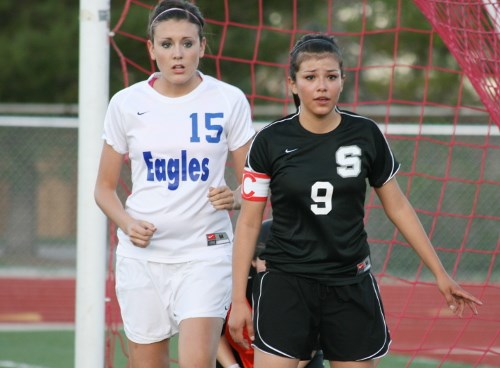 This uniform change was one of nine rules revisions recommended by the National Federation of State High School Association’s (NFHS) Soccer Rules Committee at its January 22-24 meeting in Indianapolis. All changes were subsequently approved by the NFHS Board of Directors.

Previously, the home team was required to wear solid white jerseys and the visiting team wore dark-colored jerseys. The language defines dark as “any color which contrasts with white.”

“This change allows home teams to wear their school-color jerseys at home,” said Theresia Wynns, director of sports and officials and liaison to the Soccer Rules Committee. “It also could provide the opportunity to use an alternative color uniform for special events.”

The Soccer Rules Committee also approved a change that would permit a player to participate while wearing a head covering, if the player meets certain criteria and if the applicable state association approved the request.

If approved by the state high school association, players could participate with a head covering for medical/cosmetic reasons or for religious reasons. In the case of medical/cosmetic reasons, a physician’s statement is required before the state association can approved a head covering. In both cases, the head covering cannot be abrasive, hard or dangerous to any other player and attached in such a way that it is highly unlikely to come off during player.

Another example of unsporting conduct was approved by the committee involving denying obvious goal-scoring opportunities in a game. When a player commits an offense against an opponent within its team penalty area that denies the opponent an obvious goal-scoring opportunity and the referee awards a penalty kick, a yellow card is given if the offense was an attempt to play the ball. Previously in this scenario, the player received a red card in addition to the team receiving a penalty kick.

“The committee thought this rule needed to be revised because in this situation in the past, the player and the team were placed in double jeopardy when applying a penalty,” Wynns said.

One rule regarding the offside rule in high school soccer was revised. Rule 11-1-4 now states that “A player is offside and penalized if, at the time the ball touches or is played by a teammate, the player, in an offside position, becomes involved in active play . . . “The penalty remains an indirect free kick at the spot of the infraction, but it now will be subject to the provisions in Rule 13-1-3.

“This change better articulates the difference between being in an offside position and an offside violation, as well as where the subsequent restart takes place,” Wynns said.

In another uniform change, undergarments can be a different solid color than the uniform, although the length and color of the undergarments must be the same for all members of the team.

As a result of the change made last year that allowed the kickoff to be taken in any direction, the committee revised Rule 8-1-2 to allow the player taking the kickoff to be in the opponent’s half of the field in order to take the kickoff.

The committee addressed proper sportsmanship with an addition to Rule 13-2-1. If a player, coach or bench personnel enters or leaves the field of play without permission of an official and interferes with play or an official, a direct free kick will be awarded at the point of the infraction.

In Rule 18, the committee approved a new definition of deliberate act, which is “one in which a player chooses to act, regardless of the outcome of that action. This deliberate act is neither reaction nor reflex. A deliberate action may result in the opponent benefiting from the action, e.g., a deliberate but misplayed ball that goes directly to an opponent. A reaction or reflex may result in that player benefiting from the action, e.g., a ball inadvertently contacting the arm and falling directly to the player’s feet.”

A complete listing of the soccer rules changes will be available on the NFHS website at www.nfhs.org. Click on “Activities & Sports” at the top of the home page and select “Soccer.”