Illinois Basketball Player Not to Be Underestimated 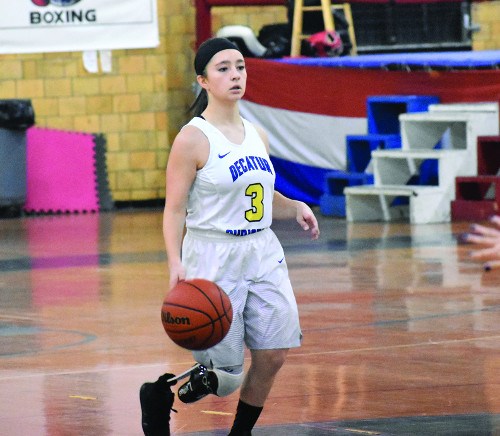 Historically, individuals with disabilities have been institutionalized, marginalized, discriminated against and – most people would agree – undervalued, underserved and underestimated. Legislation and supporting directives such as the Rehabilitation Act of 1973, the Americans with Disabilities Act in 1990 and the 2013 United States Department of Education Dear Colleague Letter have increased opportunities for individuals with disabilities; albeit, the human urge to underestimate the physically disabled is still a reality – just ask Irina Yeakley.

Yeakley, a sophomore at Decatur Christian High School in Forsyth, Illinois, is a valuable member of her school as a student, as a leader and most impressively as an athlete. Amniotic band syndrome, a condition that constricts the limbs of a child in the womb, left Yeakley with physical abnormalities affecting her hands and right leg.

In spite of Yeakley’s physical impairments, it became obvious to her at a young age that she was athletic and basketball was her sport.

“I started to like basketball more because that was the sport that I enjoyed the most and I wasn’t bad at it at first,” said Yeakley.

As Yeakley practiced and continued to improve her skills, it became apparent that the only thing keeping her from maximizing her athletic potential was the quality of her prosthetic leg.

“I was able to run and make a lay-up, shoot the basketball, dribble, box-out, everything you need to do to be able to play basketball,” said Yeakley. “I just needed a prosthetic leg to do it, but I didn’t have the best working leg until this year when I went to Amputee Blade Runners. They made me a leg that has more flexibility in the foot.”

Once Yeakley found a prosthetic that kept up with her natural athletic ability, the rest was up to her. 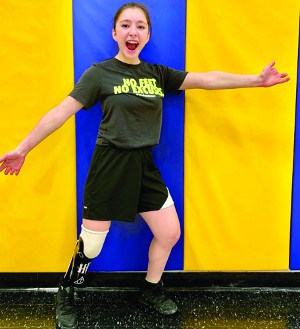 “All it took was practice, kind of like what everyone else needs to do to become better,” said Yeakley.

To be clear, Yeakley isn’t just a member of the varsity basketball team – she’s the leading scorer and captain. As a lefty, Yeakley shoots with the 2½ fingers she has on her left hand and uses her right hand – missing the top half of her fingers from the knuckles up – as support. With the assistance of her new prosthetic right leg, Yeakley runs up and down the court, jumps for rebounds, slides on defense and dives on the floor for loose balls.

“Ever since I was young, I never allowed anything to overcome me because of my disability. I wanted to do everything every other child did. If it was running, climbing, jumping or sports, I did it because I didn’t look at myself as having a disability,” Yeakley said.

While Yeakley does not view herself as disabled, her perspective is much different than those of the opponents that face her on the court.

“I have not really heard anyone say anything about me, but I do know that people will underestimate my abilities. Most people kind of think ‘aww she’s trying her best,’ which is nice but they don’t expect me to be good,” Yeakley said. “When they watch me play, they are shocked with how well I can dribble or shoot or even run up and down the court.”

Decatur Christian’s first-year head coach, Mikayla Lehman, made the mistake of underestimating Yeakley one time during a pre-season conditioning practice and received a nonverbal message loud and clear in return.

“One drill came up on our practice plan and I remember saying something like, ‘Now, Irina, if you can’t do this, then don’t do it,’” Lehman said. “Boy, did I learn my lesson. Irina not only completed the drill, she completed it again and again and again.”

“Translation, ‘Hey, I’m good, Coach. I don’t need singled out and I don’t need attention drawn to me. From here on out, don’t assume I can’t do a drill or anything else. I’m going to always try it and get it done, even if it takes me more tries than everyone else,’” Lehman said.

Yes, Yeakley’s athletic ability – in spite of her physical deficiencies – is impressive, but it’s even more inspiring.

“To put it plainly, I walked away from this first year of coaching having learned – If Irina can do this and that (run the point guard position, shoot, handle the ball, pass, and so much more) with one leg and less fingers than I have – I can do anything,” Lehman said. But, it isn’t merely Yeakley’s presence on the court or her athletic ability that makes her impact on her teammates so great, but her attitude toward life.

“When they see someone their own age doing life how she does it – carefree, joyful, never giving up, aiming for excellence – they want to join her and see what that lifestyle is all about,” said Lehman. “Seeing her peers look up to her and not down on her – because of her disability – is an amazing thing to witness.”

“Being able to play sports is my joy, because I am able to do it and I am able to do it well,” Yeakley said. “I go out and play basketball to show people that limb-different people can do anything anyone else can do, that we are not lower than normal people just because we might be missing a leg or arm or even some fingers, that we can be just as good as or better than other people.”

Yeakley delivers a strong message through her interscholastic participation and her attitude toward life.

“Never let yourself down just because someone says something or they underestimate you, because that means that they are not going to expect anything from you,” said Yeakley. “You should love who you are and not hide it from others because you are awesome!”