On January 10, 2017, ballots from 34 states, the National Catholic Forensic League, National Speech and Debate Association and the National Debate Coaches Association were tabulated at NFHS headquarters to select the 2018-19 national high school policy debate topic. Immigration was selected over Poverty with 51 percent of the votes.

In October, the five topic areas were narrowed to two as part of a two-stage balloting process. Use of the second ballot assures that a majority of coaches across the nation favor the chosen topic area and resolution.

The following chart summarizes the state-by-state balloting on topic areas. The colors reflect a vote for Immigration (Purple) or Poverty (Orange).

HOW THEY VOTED FOR 2018-19: Choice of problem area and resolution by Official Referendum Vote: 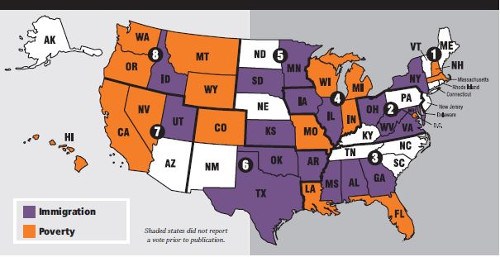 19 IMMIGRATION
Resolved: The United States federal government should substantially reduce its restrictions on legal immigration to the United States.