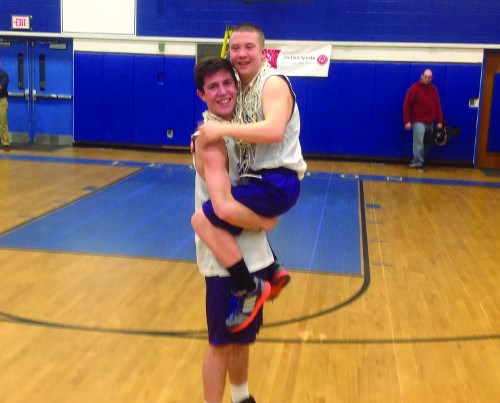 In overtime, with the clock against him, Hampden Academy’s (Maine) David Manzo made the best of his opportunity. The senior basketball player arched and released a swift hook shot that he perfected in childhood to defeat Lisbon (Maine) High School at the buzzer.

The 32-30 overtime victory gave Hampden a Unified Sports state championship in March 2015 and was more jumpstart than conclusion for Maine in its inaugural season of sanctioned Unified basketball.
“It could be a movie. It really could. I’m so excited for the team. It’s just a great way to end the season,” said Manzo to the Bangor Daily News. “It’s something not just Unified Sports can do, but sports in general. It’s something magical.”

Now in its second year, Unified basketball has become one of Maine’s highest profile sports. Unified basketball featured 17 teams among its 153 member schools in its inaugural season. That number has grown to 32 this year, which is representative of a nationwide growth in inclusion programs for students with disabilities.

“I think the biggest and best thing that has come out of this is the impact of Unified basketball on the school culture,” said Dick Durost, executive director of the Maine Principals’ Association (MPA). “Unified Sports allows these athletes to be on public display and to shine in a way that they’ve never had. We hear about the athletes being invited to sit at tables in the cafeteria that they probably would have never been asked to sit at in the past. There’s just a feeling of acceptance on the part of the athletes and a greater understanding from the vast majority of the rest of the student body of some of the issues these athletes deal with.”

Nationwide, the inclusion of students with disabilities into education-based athletic programs is becoming a norm. And inclusion is the ultimate goal of the 30 state associations currently offering a state championship/event in Adapted, Allied or Unified Sports (See the Around the Nation map on page 9). According to the 2014-15 NFHS Inclusion Survey, 14 state associations offered Unified Sports that ranged from basketball to bocce and volleyball. The survey also found that 15 states were considering the addition of Unified programs.

Unified Sports were established by Special Olympics, which has an education and sports-based strategy known as Project UNIFY®. These programs pair students with disabilities to a peer without, aiming to achieve a mission of providing students with intellectual disabilities an opportunity to develop physical fitness, demonstrate courage and experience joy – all while developing friendships.

“State associations have been diligent in efforts with their member schools by reaching out to include as many students as possible in education-based athletic programs,” said Becky Oakes, NFHS director of sports and liaison to the NFHS Task Force for Inclusion. “As a result, states are including students by the addition of programs. Whether they’re a Unified program, an adapted program, or if they’re working with their students that have some type of a disability, there is an accommodation that can be made so that any student has the same opportunity to participate as a student without that disability.” 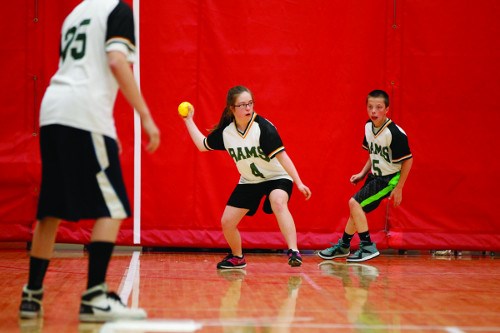 Unified basketball in Maine was adopted from Rhode Island and Connecticut, where Durost said similar programs began a couple of years prior. Thanks to MPA Assistant Executive Director Mike Burnham, it all became reality.

The basis for the program involved a team consisting of a minimum of three “athletes,” who are students with disabilities, and their “partners” – participants who are not involved with other athletic interests. As part of Unified basketball rules, partners cannot score more than 20 percent of the team’s total and have the task of getting their athletes in position to score.

Durost said he and his staff have often heard from parents about how happy their sons and daughters are. Not only that, but partners are discovering their future interests, realizing through the program that they want to obtain an education to become a teacher and work with students with disabilities.

“It’s probably the most positive thing that we have done in my 15 years with our association,” Durost said, adding it’s difficult to leave a game not wearing a smile and having a tear in your eye.

Inclusion of students with a disability in sports such as track and field is not uncommon. Maine and others have had situations arise where modifications have been needed to allow individual athletes to participate. Oakes said the task force is continuing to learn of more students with disabilities who, across the nation, are being integrated into traditional education-based athletic programs such as cross country.

In Minnesota, where adapted programs have been sponsored since 1993 by the Minnesota State High School League (MSHSL), there has been a rise in leagues that enhance the opportunities of students with disabilities.

“Our schools and programs feel very strongly that you should be able to play to the best of your abilities,” said MSHSL Assistant Director Rich Matter.

To do that, the MSHSL has modified aspects of respective NFHS rules for use with its four Adapted Sports: bowling, floor hockey, soccer and softball. Examples include the use of a felt-covered puck for hockey and playing indoor soccer to allow ambulatory students to play next to students in a wheelchair. 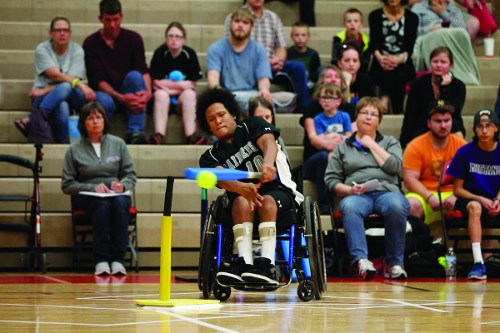 Each of the four adapted MSHSL sports fall under either the cognitive or physical impairment divisions. A full 8-10 week regular season takes place for the sports, culminating in an eight-team tournament and state championship for both divisions.

“We took over a program from a grassroots organization called the Minnesota Adapted Athletics Program,” Matter said. “This program had actually started in the early ’70s by some very inclusive athletic directors in the Minneapolis-St. Paul districts. They then brought it to the high school league board and it became under our auspices.”

Approximately 70 of the 500 MSHSL member schools participate in at least one of the four offered sports. According to Matter, there’s an ongoing attempt to increase Adapted Sports in his state but smaller schools outside the metropolitan areas face the challenge of getting proper transportation.

“We saw some more significant growth in the metro Minneapolis-St. Paul communities,” Matter said. “To form a team, many of our schools have to co-op to participate. By that, we may have four or five schools in a geographic area that all send kids to the same school and participate as a team. We call it a cooperative sponsorship.”

The formation of partnerships has become a critical aspect in the growth of inclusion programs. The NFHS has partnered with organizations like the AAASP, United States Olympic Committee and U.S. Paralympics to share information that helps students with physical disabilities maximize their abilities. According to Oakes, the increase in “Coaching Unified Sports” courses available on www.nfhslearn.com has grown with the expansion of Unified Sports programs offered within the state association programs. To date, 16,708 of these courses have been delivered via NFHS Learn.

The California Interscholastic Federation (CIF) formalized its step into the world of Unified Sports in November, rolling out a four-organization partnership aimed at increasing the number of participants in its programs. Working alongside the California Department of Education, U.S. Special Olympics and U.S. Paralympics, CIF Director Erin Davenport said the CIF’s goal “is twofold.”

For paralympic-affiliated programs such as track and field – the first to be unveiled – the CIF is using a “build it and they will come model,” Davenport said. The model will allow students with disabilities to participate in the sport designed specifically for them, similar to Maine’s program for basketball. Davenport added that the CIF’s intention is for swimming and diving to follow next year.

Using a grassroots concept that proved to be successful for states like Minnesota, the CIF’s Special Olympics aspect will be done with the assistance of the California Department of Education and Special Olympics. The goal is to provide resources for schools to develop Unified Sports programs on their campuses. The expectation is to start at the grassroots levels and develop until neighboring schools begin to acquire Unified programs.

In addition to the sports they’re preparing to launch, the CIF is encouraging participation in basketball, bowling and soccer.

“We’re starting to see a shift in momentum where a lot of schools are starting to understand the concept and want to develop an exhibition of Unified competition that will morph the next year into an actual team that will compete,” Davenport said. “We have a league in northern California that is offering three different Unified Sports during each season of sport and bowling happens to be a third one.”

Allied Sports is the third inclusion offering and is exclusive to Maryland. Utilized by Baltimore County Public Schools since 1994, Allied Sports is a combination of Adapted and Unified programs where student-athletes with intellectual disabilities compete alongside those with physical disabilities.

In the March 2013 edition of High School Today, resource teacher Brad Kressman said Allied Sports present students with disabilities an opportunity to compete on an even playing field with their non-disabled peers.

“One of the words used a lot was, ‘sameness,’” Kressman said. “They (program organizers) wanted to have the same type of experience in interscholastic athletics that other students had.”

The NFHS Task Force for Inclusion continues to increase its effort in spreading the incentives of involvement with inclusion programs. The task force is preparing to conduct its 2015-16 NFHS Inclusion Survey to update the program offerings of state associations.

“I think we’re doing better changing the culture in our schools. Our schools are reaching out to students in the student body that may have a disability, cognitive or physical,” Oakes said. “They’re bringing them in as participants. We’re changing the culture on the other side in that the students are building that self-confidence and saying, ‘Hey, I can swim; I can be a track and field athlete.’ They’re viewing themselves as participants. They’re not limited to the sideline. Across the country, we are making the move from sideline to game time.”