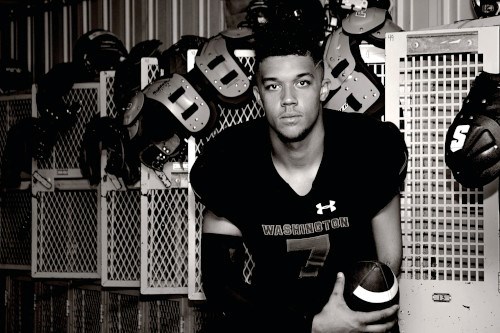 Trashaun Willis exemplifies the spirit of high school sports. He excels on the football field, on the basketball court and in the classroom. Humbly, he credits his parents, coaches, teammates and community for the success and attention he has received at Washington (Iowa) High School. While some opponents and college scouts may doubt him, Willis continues to find motivation in the doubters.

“It definitely pushes me harder,” Willis said. “It makes me feel like I have to work twice as hard as everyone else does.”

That is just what Willis has been doing since he was born. As a result of amnionic band syndrome, Willis’s left arm ends just above his elbow. Instead of letting others help him along the way, he took it upon himself at a young age to find a way to master even the most basic of skills one-handed.

“I always told my parents that I could do it,” Willis said. “My uncle would always ask to help me in buffet lines, or my dad would ask to help me tie my shoes and I’d be like, ‘I got it. I’ll do it.’”

This attitude and approach toward his physical impairment has allowed Willis to face every new obstacle with confidence. Learning fundamentals on the football field and basketball court that are traditionally completed with two hands was no problem for Willis.

“Catching the ball – I always saw people catching it with two hands, so I kind of just used my little arm to like use it as another hand when I was catching the ball and just used it as a helper,” Willis said. “It just came pretty naturally to me. I don’t know, I didn’t do anything special or anything it just came that way.”

When teams found a way to exploit his weaknesses, Willis enlisted the help of others and put in the time and work to get better.

“I figure out ways around it,” Willis said. “I’ve always talked to my dad and the coaches about what I can do – especially in basketball. Basketball is a lot harder than football because there isn’t someone constantly in my face trying to alter my direction. Basketball is just a lot, a lot of practice.”

When other kids would underestimate and prejudge Willis before a game, this just motivated him to work harder.

“I feel like, when I was younger going into tournaments and stuff, everyone kind of had that mindset going against me that I really couldn’t compete with them and maybe I’d come off the bench or was on the team as like a pity party. It kind of just pushed me to be the best I could be,” Willis said.

Willis has never been on a team out of pity. In fact, he first gained notoriety when his dunk in a middle school game was caught on security tape and made it on SportsCenter Top 10. He is the starting quarterback and linebacker for the undefeated Washington High School football team.

“I watched him in middle school and have seen what he’s overcome,” Harris said. “I know his parents have always challenged him. What is special about them is they understand that the world is going to challenge you in that if you make excuses, it’s not going to get you anywhere. He’s internalized that as you can hear when he talks – he puts the ownership on himself.”

Harris has coached Willis since his freshman year in high school – first as the defensive coordinator and now as the head coach.

“I want to put the biggest, strongest, fastest athletes on the field,” Harris said. “He’s been calling our plays defensively as our Mike for three years in a row. He’s had a pick-six every single year.”

Harris just wants the world to see Willis as he does.

“It’s important for us to try not to put our limitations on him, because he is that special of a kid where he’s making these things happen on his own,” Harris said. “For us, we might think of it as a limitation, but for him he’s simply just being himself and moving forward. He’s focused on what he can do and not what he can’t do.”

What Willis wants to do is take the Class 3A Iowa High School Athletic Association (IHSAA) football playoffs one game at a time, continue to build on Washington High School’s first winning boys basketball season in 14 years, and finalize his college plans. He knows he wants to major in psychology and would love an opportunity to play football at the next level.

“I want Trashaun to get a fair shake as far as getting a collegiate opportunity,” Harris said. “So many of these Division I colleges have these predisposed boxes that they want to put people into. If you’re not 6’6’’ and you don’t fit this box, then we’re not going to give you the opportunity, because so much money is invested in these major programs and their jobs are relying on it. I just can’t fathom that having an athlete like Trashaun on your team would not make everybody better and you’ll see that he can play if you just give him the chance.”

Proving people wrong, defying the odds, exceeding people’s expectations has been Willis’ modus operandi his entire life. Doing it all with grace and class just makes Willis even more special.

“Any opportunity is a great opportunity and I’ll be more than happy with wherever I go, whatever I do -- DI, DII, DIII. I’ll just be the best I can be.”