Love for the Game Spurs Indiana Official’s Return from Accident 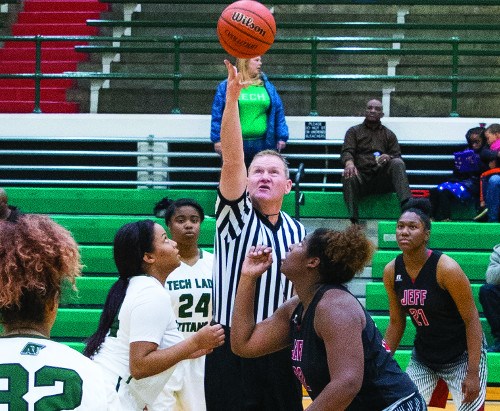 Tim Coady, an Indiana high school basketball official, grew up loving the sport he gives back to. Although an Ohio native, Coady shares Hoosiers’ passion for the round ball.

That passion was nearly stripped from Coady, however, when in April 2016, on a “rainy, dreary and miserable kind of (Saturday),” an industrial mulcher he was repairing switched on and begun pulling him down, legs first.

“One of the pieces of equipment that we have has a huge, industrial auger in it. Before my crew came in, I decided there were some maintenance issues that had to happen to that machine. It was something I’ve done on a regular basis and I have never had any issues,” Coady said. “I climbed down into the auger area, which is about 10 feet down from the top, and was doing my maintenance repairs. I had the remote control with me, but one mistake that I made was that I left the power supply on and mishandled the remote, so it fell out of my hands and onto the floor.”

Consequently, Coady said the auger started turning, bringing him down with it.

“I was able to locate the remote and reach to grab it with barely an inch to spare,” Coady said. “I turned it off and I think if I had gone another split second both of my legs would have come off.”

Coady sat in the machine, legs “mangled” and in bad shape for about 15 minutes. With nobody in his vicinity, Coady said he screamed for help until one of his crewmen came and discovered his powerless condition.

Once on the scene, the Lawrence (Indiana) Fire Department thought its only option was to remove Coady’s legs before extraction. That idea led to trauma surgeon Timothy Pohlman, M.D., being flown to the accident site from Methodist Hospital. Fortunately for Coady, with the help of time, pain medications and antibiotics, the Lawrence firemen formulated a plan to determine the best tools to remove Coady from the 10,000-plus pound machine.

Coady was eventually freed with his legs intact and flown to Methodist Hospital for an immediate successful surgery. He remained in the intensive care unit for two weeks and endured four more surgeries by June 2016.

“I was told I would walk again but it would take a lot of work over about a year or so,” Coady said. “They felt confident I would walk but they didn’t know about running, but I was going to try my best and I did everything they said. I had great physical therapists along the way.”

Coady was persistent. Focused to get back on the hardwood to officiate, he was able to run a little more and more each time he got on the treadmill.

“I wouldn’t say I’m 100 percent, but I am running and now back to running basketball games,” Coady said.

“Returning to officiate was a goal of mine. When I was off, I was watching a lot of games, going to games and seeing my buddies out there, and it gave me a huge desire to get back and get out there; that spurred me on,” he added. “I enjoy being out on the floor, making the calls and helping the kids. I forged a lot of great relationships in basketball – not only with other officials and coaches, but with administrators and so forth. I missed that a lot. If I couldn’t get back to officiate, I would’ve helped in other ways, but I feel so blessed that I am back and doing what I enjoy.”

Coady’s love for basketball is derived from driveway pick-up games with his brothers as a child. It was there he forged relationships with kids in his neighborhood and developed his desire to constantly be around the sport.

In 1986, at 23 years of age, Coady moved to Indianapolis from Columbus, Ohio, to start Indiana Mulch with a friend. Since then, they’ve created multiple stores and a manufacturing facility in the area. As years progressed and his body could no longer keep up with playing the game, Coady turned to officiating, which he said is now his personal escape from day-to-day business operations.

“My eyes were opened to officiating and one of my friends suggested it,” Coady said. “I got licensed and since then, I never play anymore. I found out it’s a great way to stay connected.”

On November 11, 2016, Coady made his return to officiating when he worked a girls basketball game between Arsenal Technical High School and Lafayette Jefferson High School. Dr. Pohlman and others who helped save Coady’s life attended the game, which was featured by the Methodist Hospital Foundation and other news outlets.

“I’m back on the floor and I’m back to doing things I like to do and living a normal life,” Coady said to Indianapolis news station WTHR-13 on the night of his return.

Coady has received overwhelming support since returning to full-time officiating. Prior to the accident, he was accustomed to working as many as five or six games per week. That was then reduced to a two- to three-game schedule in the months following his return.

“I can tell you that Tim has returned to the profession of officiating in better shape than prior to the accident,” said Sandra Walter, Indiana High School Athletic Association assistant commissioner. “His work and sacrifice to return is a benefit to our student-athletes and to our office.”

Just as he was lured to the job, Coady said he continues to try to get others to give officiating a chance. Once out there, they too will have the opportunity reconnect with something they may be passionate about.

“You may not see that from the stands, but when we’re out there running up and down the court, it’s very rewarding and you develop some great relationships,” Coady said.