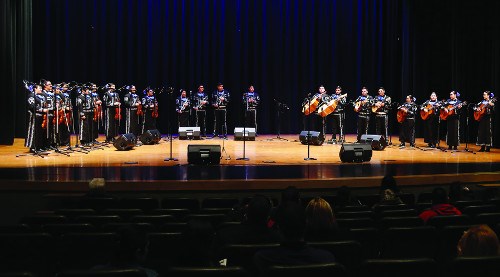 Mariachi music is alive and well in Texas. Indigenous to Mexico and its culture, mariachi music typically includes singers and instruments such as violins, vihuelas, guitarrons, trumpets, and even harps or accordions. And the performers most often wear traditional mariachi outfits known as charros.

Since singing is an integral part of Mariachi, this music combines vocal and instrumental music education into one instructional setting. Mariachi is quickly gaining popularity throughout the state, resulting in many Texas schools now offering instruction in this genre of music.

As one would imagine, there are several necessities to initiating any new program of instruction, with mariachi being no different. First and probably most importantly, a qualified teacher is needed. Several Universities in Texas, as part of their music education programs, are now offering specialized training in mariachi education. This training is paired with the university’s teacher certification program and is designed to create the qualified teachers needed to meet the demand for this growing area of specialization.

Additionally, instructional space and instruments are a must. Since a typical mariachi performing ensemble involves as few as seven or eight students to as many as 20 to 25 students, the size of the instructional space does not need to be as large as that of a band or orchestra program; however, the space does need to have adequate storage and acoustical treatments appropriate for a music rehearsal.

The instruments needed – violins, vihuelas, guitarrons, and trumpets – may be procured on an as-needed basis; and, because this program typically consists of fewer students than other instrumental programs, this cost can be low. The traditional mariachi outfits, called charros, are not a requirement of starting a program, but should likely be a desirable long-term goal in order to give a mariachi program a level of authenticity that is not unlike a marching band or symphony orchestra wearing their traditional uniforms.

Whatever process a school follows for starting a mariachi program, the end result is typically very positive for the students, school and community. Mariachi provides a unique connection to the Mexican-American culture through its music, which can be enjoyed by everyone.

With the vision of growing, celebrating and developing this unique music genre, the University Interscholastic League (UIL) recently began a new state event. The UIL first offered mariachi as a medium ensemble on the regional level in 2008 and expanded in 2016 by adding a state festival. Schools wishing to participate in the state festival are required to enter the region medium ensemble contest and compete for a rating. Those ensembles receiving the highest rating of division 1 (superior) at the region level may then participate in the state festival. 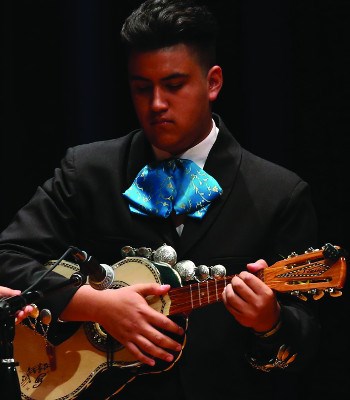 Dick Clardy, director of instrumental music in the Fort Worth Independent School District, recently commented on the 2017 festival saying, “The adjudication was consistent and at a high level and the clinic sessions were a real bonus. They were very idiomatic of the genre and beneficial for the students. Fort Worth ISD thanks you for the effort and hard work.”

Schools participating in the state festival are permitted 10 minutes of performance time and are evaluated by a panel of three adjudicators. Each adjudicator provides written and recorded comments, and then assigns a rating of division 1, 2, 3, 4 or 5, with division 1 (superior) being the highest. Each ensemble is then given an overall rating based on the average of these three ratings. Following a performance, each ensemble also receives a 30-minute clinic with a nationally recognized expert in the field of mariachi. Additionally, all performances are professionally amplified to provide the best possible concert experience. Awards are given to the schools receiving an overall division 1 rating (superior) and adjudicators are permitted to recognize individual performers for exemplary musical achievement.

It is UIL’s vision that through providing a positive and educationally sound experience for the participants, mariachi will continue to grow and develop in the schools. More information is available at: www.uiltexas.org/music/state-mariachi-festival.

Dr. Bradley Kent serves as State Director of Music for the University Interscholastic League, where he oversees a system that provides educational music competition for some 750,000 student participants annually in Texas. Prior to his appointment at UIL, he served as an educator and school administrator on the high school and university levels in Texas.

BMI and the NFHS Make it Simple to License Music