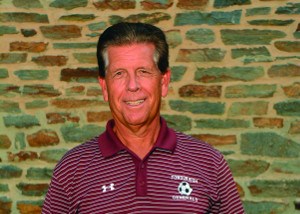 When Randy Dase, head coach of the Towson (Maryland) High School boys soccer team, found out that he needed to have surgery for prostate cancer, he immediately knew when he wanted to put it on the calendar.

“It was a tough summer because I knew I was going to have the operation, so I sort of scheduled it around the soccer season,” Dase said. “People asked, ‘Why would you miss most of the season?’ but I got back for the last regular-season game. That was in my plan since that’s when we honor the senior players. I had an opportunity to be there for the playoff run, which is something I just love – the tournament.”
Dase was working toward being able to return in time for the late season push, but what he didn’t anticipate was what his team was working on to honor him in his absence.

In September, which is National Prostate Cancer Awareness Month, Dase’s players worked with Towson athletic director, Justin Nash, and the booster club to arrange a benefit for their coach. For the Generals’ home game against Sparrows Point High School, ticket prices were reduced to $1 each, a donation box was placed at the entrance to the game and the proceeds from all concessions were contributed to the effort.

In just one night, the team raised $900 for the Brady Urological Institute at Johns Hopkins Hospital, where Dase had undergone surgery. Players on both teams wore blue wristbands in the game that Towson won 2-1. All that was left to do was tell their coach about the event, since he was still at home recovering. 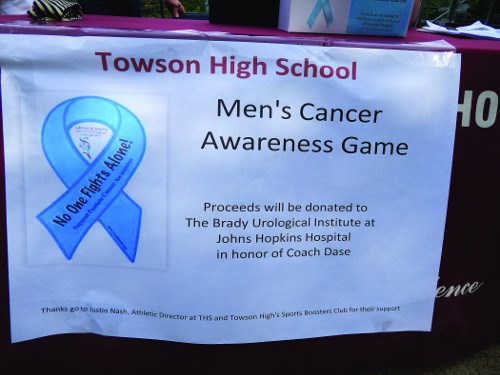 The week following the benefit, Towson’s three captains arranged to visit Dase at his house under the pretense of asking some questions about the season. After a while, they told Dase about the benefit and showed him some pictures from the night.

“I emotionally broke down,” Dase said. “So they had to sit and watch their coach cry for a little bit. It still emotionally gets to me; I’m just starting to get to the point where I can talk about it.

“Once I pulled myself together, I told them, ‘Guys, I’ve been coaching at Towson High School for 40 years, but this is the nicest thing anybody’s ever done for me in my coaching career.’”

That coaching career encompasses not only 29 years as head coach of the boys soccer team, but also 33 years as basketball coach and 20 years coaching lacrosse. Dase has taught at Towson for 40 years as well.

What makes it even more special to Dase is that Towson is also his alma mater. He earned a varsity letter in each of his three seasons in soccer, basketball and lacrosse, led three lacrosse teams and one basketball team to Baltimore County titles and was named Student-Athlete of the Year in 1972. In 2013, he was part of Towson’s inaugural Hall of Fame class, alongside Olympian Michael Phelps.

“I’ve been very fortunate. I’ve been teaching at the same school for 40 years, coaching there and I graduated from Towson High School. It’s been overwhelming and, at the same time, it’s been sort of neat,” Dase said. “I cannot tell you the number of texts, emails and phone calls I’ve received from previous players and students I’ve had over the past many years.” 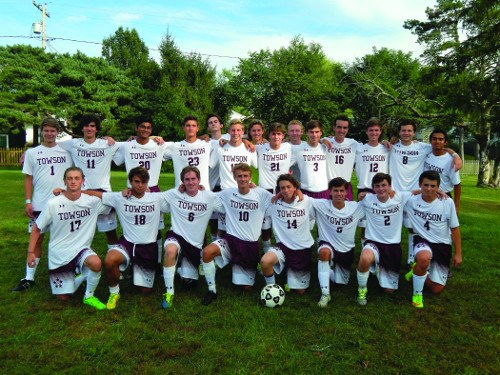 One of those former players was on the sideline the night of the benefit and during the rest of the season while Dase was out. Assistant coach Jon Becker, who played for Dase from 2005 to 2009, coached the team to a winning record before Dase returned to the sideline.

“The last time we won the regional tournament and went to states, he was a senior captain and midfielder,” Dase said. “It was a great opportunity for him and he did a fantastic job. “I knew the team was in good hands, but I was eager to get back and get to the playoff situation. It was so much fun to see how successful he was with them and how he developed them into a championship team.”