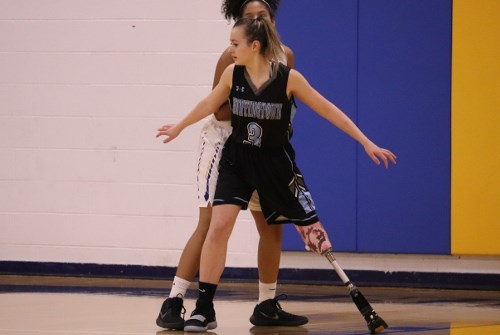 Amanda Merrell, a student-athlete at Huntingtown (Maryland) High School, has been selected the 2019 national recipient of the “National High School Spirit of Sport Award” by the National Federation of State High School Associations (NFHS).

Born a healthy 10½-pound baby and the third of four girls, Amanda’s young life developed like that of a normal toddler’s. That all changed at the age of three when her parents John and Suzanne spotted a bruiselike lump the diameter of a lemon on her upper left calf. Since Amanda was an active baby, her parents and doctors thought it was nothing serious. The doctors x-rayed her on the Friday before Fourth of July, and the Merrells received a call the following day that she was to see an oncologist at the Children’s National Medical Center in Washington, D.C.

The doctors there initially told the Merrells that there was nothing routine about the lump. A few days later, Amanda was diagnosed with Ewing’s sarcoma – a rare cancerous tumor that grows in bones or in soft tissue around bones that occurs more commonly among older children and adolescents.

Since that time, she has been getting a new prosthetic once or twice a year as she continues to grow. She owns a second one that she uses for non-running activities.

Outside of classwork in high school, Amanda has played field hockey, lacrosse and basketball, which is her main sport. She participates in fundraising events to raise awareness for patients going through similar experiences. However, sports is what drives her, and her dream is to play college basketball. “Sports is literally my everything,” Amanda said.

When she shoots a basketball, instead of setting both feet like most players, she puts her right leg in front of her body and shoots only with that leg. When she runs, she kicks out her left leg sideways as if she’s drawing a circle with her foot.

As a sophomore, Amanda was the junior varsity team’s leading scorer at just under 10 points per game. Through her on-court play and off-court demeanor, Amanda is a true inspiration to everyone at Huntingtown High School and within the community. She never complains about her situation; rather, she walks around the school wearing a big smile. During basketball games when she isn’t playing, she’s the biggest cheerleader in the gym for her teammates. Her love for basketball can’t be measured, but the spirit that she brings to the school and to the community will never be replaced.

Nominations for this award were generated through NFHS member state associations and reviewed by the NFHS National High School Spirit of Sport Award Selection Committee composed of state association staff members. While the national winner will be recognized June 29 at the NFHS Summer Meeting in Indianapolis, Indiana, the section winners will be recognized within their respective states and will receive awards before the end of the current school year.

The National High School Spirit of Sport Award was started in 2008. Including this year, 12 individuals and three teams have been chosen national award recipients.