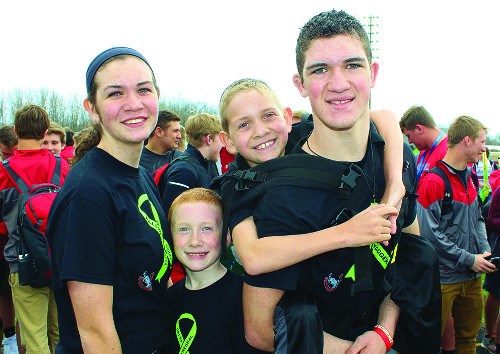 “In times of difficulty, those brave enough to stay the course will be victors in the end.”

Those words spoken by revered University of Michigan football coach Bo Schembechler resonate for 16-year-old Michigander Hunter Gandee, who has embodied the quote in helping his younger brother persevere in his battle with cerebral palsy (CP).

As a spry eighth-grader, Hunter turned his mother’s idea into a reality, carrying his brother Braden piggyback style for 40 miles from Temperance, Michigan, to the University of Michigan wrestling center in Ann Arbor, to raise awareness for CP.

“My mom had the dream one night that I was carrying Braden, who was seven years old at the time,” said Hunter, a junior wrestler at Bedford Senior High School. “We laughed about how it was a crazy dream and then a few days later we came back and, after thinking about it, thought what if this is something we can actually do.”

Not only did he achieve it but Hunter has since accomplished a 57- and 111-mile walk with Braden in tow. Hunter said when the family set out to raise awareness for their “Cerebral Palsy Swagger,” its only intent was to get others to see the difficulties those like Braden must face with CP. But as they trekked forward during the first walk, the attention increased and became a common sight on NBC Nightly News. People across the country wanted to know how to donate, and eventually how to have a direct impact on Braden. An estimated $19,000 was donated after the walk in the name of the Gandee brothers to the University of Michigan’s Cerebral Palsy Research Consortium. In all, more than $200,000 made its way to the UM research group.

“We really didn’t know what we were getting ourselves into but we went for it,” Hunter said. “We thought it was going to be a community project, something that my Bedford High School community and surrounding high schools could help with. But we got so much more press than we expected, so much more attention. We were just so thankful for it because our goal the entire time was just to raise awareness for cerebral palsy.” 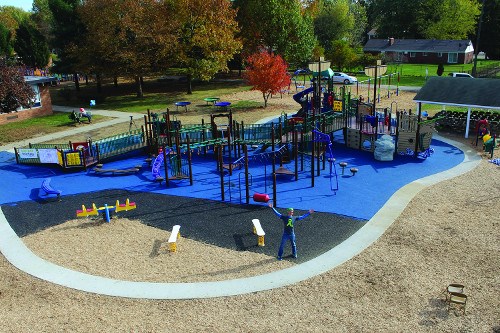 Braden’s gift from the donations came in the form of a wheelchair-friendly piece of playground equipment resembling a pirate ship. Every day for three weeks, Hunter, his family and volunteers constructed the playground addition at Douglas Road Elementary.

“It was a lot of work,” Hunter said. “At the time, I would go to school and then football practice before going right to working on the playground. I’d be there from about 6 p.m. to around 10:30 p.m. at night every day.”

Since middle school, Hunter’s motivation to push Braden has been shared by his drive to improve as a wrestler. Hunter made the varsity wrestling team as a freshman. Now a junior and two-year varsity letterman, Hunter’s innate leadership skills are something Bedford wrestling coach Kevin Vogel believes sets him apart in reaching his goals. 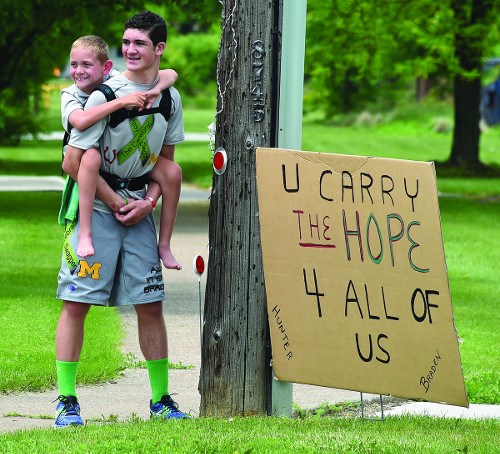 “Hunter’s a natural leader. The way he carries himself, the way he speaks. His actions show it,” Vogel said. “He doesn’t have to say anything to show his leadership. “Some kids are so worried about themselves getting better that they don’t look around the room at anyone else. Hunter’s not that way,” Vogel added. “Yeah, he’s training hard for himself, but at the same time, he’s working with different partners to help them get better. I think he understands that you’re only as good as your best workout partner, which is something I’ve always believed.”

Through three walks and countless memories made, Hunter said pinpointing one is hard to do. He added that he met people and saw events unfold so perfectly that it’s hard to explain how it took place. One instance occurred during the first walk. Bothered by chaffing due to rainy conditions and chilly temperatures, Braden endured all he could until 10 miles remained on the second walk. Knowing his brother was in pain, Hunter carried Braden in his arms until the duo reached a time to stop and rest in their RV.

“We knew I couldn’t continue like that because it was too much on my arms. We got to the rest stop and I called my best friend on the phone,” Hunter said. “He prayed for us and our situation, and as soon as we got off the phone with him, we had three different people come to us with idea on how to change our positions and the supplies we were using. It all kind of happened at the same time and was amazing. It came from a prayer, we honestly believe, and shows what God did for us in our journey for what we were trying to do.”

College and the prospect of wrestling at the next level are ahead for Hunter. As Braden continues to grow, his older sibling knows the door for another walk is slowly closing. Those around him like Vogel, though, see endless potential from a student-athlete who continues to push his own limits. If anything, Hunter has proved victorious in spreading CP awareness with his partner by his side.

“People across the country know his story,” Vogel said. “I’ve talked to people in California who know about it. Hunter set out to raise awareness and I really think he’s done it.”