By Josh Thurow as told to Tim Leighton on October 03, 2017 hst
Share
Print 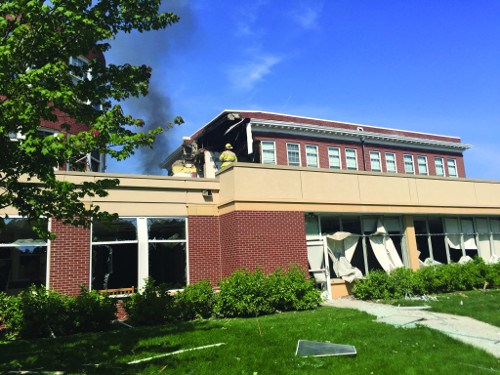 It was past mid-morning on August 2, and Minnehaha Academy activities director Josh Thurow was in a familiar place. Tucked away in his office on the mezzanine level of the northernmost wing of the Minneapolis-based private Christian school, he prepared for the coming school year, slicing through paperwork as the silence was interrupted now and then by the pleasing sounds of a basketball hitting the wooden floor below. That made the school’s longtime girls basketball coach smile. It had been a really good morning, he reflected. He had met with representatives of a field turf company to see about an upgrade to the school’s soccer field on the picturesque campus that overlooks the Mississippi River. Soon after, it was time, he figured, to carry out a routine trip to his mailbox in the administrative wing. However, when he got up to leave his office, he heard a request from court-level from one of Minnehaha Academy’s student-athletes.

“The girls wanted some music played on the gym’s sound system while they ran through drills in preparation for a late-summer tournament. I always aim to please, so I said I’d be right down. As I was about to plug the music in, I heard a loud boom and the gym floor moved. I’ve never been in an earthquake before, but that is what one must feel like. The ground shook for five, maybe even 10 seconds. I figured the loud, explosion-like sound was coming from the science wing, which is right next to us. I wondered if a science experiment blew up.

“We immediately sensed it was bad. There were eight of us, including an adult who was supervising the gym. We flew out of the building, not sure what was happening. The safety of the girls was first and foremost. In those immediate moments, all I could think about was making sure those girls were safe. I figured if we could make it to the courtyard of the school, we’d be OK. Even then, I told them to keep going, keep running to get off the school grounds, and to not stop until they were a block or two away. This was going to be no place for a 15- or 16-year-old.” 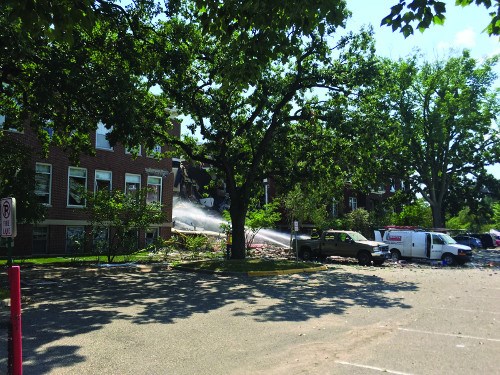 With so many stimuli at work, Thurow stopped to survey the scene. It was a gut-wrenching one. A natural gas explosion during maintenance work turned a wing of the school, which was founded in 1913, into a morass of bricks, mortar and splintered wood from the collapsing of walls. He would later learn that a 47-yearold school receptionist and an 81-year-old retiree who served his beloved alma mater as a custodian, had died in the blast. An assistant soccer coach lost his leg in the tragic event. Among the others injured was the school’s president, Donna Harris, who suffered two sprained ankles and other cuts and bruises. She and others climbed to higher points of the blast site for a better chance of safety and rescue.

“When I knew the girls were safe, I looked around to see what else I could do, to make some sense of the chaos. I saw that Donna needed some help and she called me by name. We needed a ladder if we had any chance to rescue her and others. Maybe it was a small miracle, but there was a ladder not far from her, but lower. I got the ladder, but it was too short. I knew where a longer one was, but as I turned to go get it, the Minneapolis Fire Department was already there. How did they get there so fast?

“Within five minutes of the blast, the fire and police departments were already there working the scene. They were calm, and, I think, heroic, in what they do. It did my heart good to see these pros work a scene like that. One of the police officers asked me to stay. They wanted me as the information guy. Also working the scene were the NTSB and the ATF. It was amazing to see those organizations working together.

“During all of this, my phone was going crazy with people trying to reach me for information. Family, fellow coaches, other athletic administrators and my fellow officials all wanted to know if I was OK. I answered a few quickly, but had to keep it short and stay on task during all of this. As it was, I was doing more reacting than thinking. I admit I did think ahead a bit at times. School was starting in three weeks and you think about what is going to happen to the athletic programs.”

As part of his role, Thurow called coworkers who might have been in the building. Going off a mental checklist and working with an employee on the west side of the building who had exited safely, they determined that two school employees were still unaccounted for. The media had been a presence throughout. Thurow handled some of the interviews at the scene and in the days following. He later declined nearly two dozen interview requests because, he said, some outlets, he felt were trying to make him out to be a hero in a chaotic scene. Thurow would have none of that. He sees his works as service to the students and community of Minnehaha Academy. Physically, he wasn’t eating much and he didn’t sleep for nearly three days following the blast.

“There are a lot more questions than answers. It was all so unsettling. A couple of nights after the explosion at school, someone in my neighborhood was shooting off fireworks. The loud bang really got me. I couldn’t sleep. The sounds and emotions were too raw. A lot of people got out of a tough situation at our school, but my heart hurts and is still heavy for the two that didn’t make it out.” 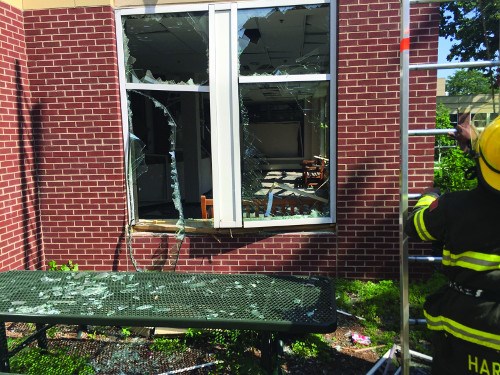 Thurow prayed that August 14 would come quickly. That was the opening day of practices for fall activities in Minnesota. It would be a chance for student participants to come together, to become a team again. It meant a chance at establishing normalcy. Behind the scenes, though, the school’s administration was scrambling to find a suitable facility to host the school’s 9-12 enrollment of 350. The start of school was pushed back to September 5, which bought time to solve facility issues. Fellow conference members, as well as small colleges in the immediate Minneapolis-St. Paul vicinity, reached out in support, offering use of school and athletic facilities. With the school’s gym not expected to be ready until December, at the earliest, the volleyball program has had to relocate 10 blocks south to the school’s lower campus of mostly elementary-aged students. The natural-grass soccer field, located adjacent to the school on the west side and named after a Minnesota soccer pioneer, is littered with an infinite amount of glass shards and wood splinters, and will have to be replaced. Day-by-day decision-making has become the norm more than usual in the life of an athletic director. With his administrative assistant injured in the blast, Thurow hired his wife, Heather, as his temporary assistant.

“When I get discouraged about these daily curveballs, she gets in my face a bit. She tells me whining about things won’t fix them. She reminds me that we’ve got to be strong as we move forward. The riddle you are facing is how to provide a great high school experience for kids and your community in the wake of something like this. You have half of the facilities you had a few moments ago, yet you still want to deliver for the kids, to keep things natural and normal. Staying flexible and proactive has been key in the aftermath of all this.”

Thurow feels blessed. Had he been in his office during the blast, he figures he would have suffered, at the very least, a head injury because his back would have been facing the blast. If he had checked his mailbox like he does every day at that time, the outcome might have been worse. He is mindful of giving silent thanks daily for being pulled from that routine. He makes trips to the explosion site almost daily to check on things, but he must do so from outside the perimeter of a chain-link fence. Even as a school official, he is not allowed within the confines of that fence that is under constant security surveillance. The NTSB finished its investigation on August 21 and handed the site over to a national water and fire damage cleanup company. Thurow is quiet and contemplative when he is near the site and is appreciative of the kind words from onlookers that recognize him as part of the school’s administration.

“I just played a part, a small one, in all of this. I am thankful that I kept my wits about me. Maybe that comes from the officiating. (He is a high school football and Division II and III football official, as well as a high school and college basketball official). No emergency action plan could have prepared us for something like this. You just have to think, and adjust on the fly. You must be flexible. If you are so locked into your ordinary, you won’t be ready for something extraordinary. I hope and pray no other athletic director has to go through something like this.”

Josh Thurow is the activities director at Minnehaha Academy in Minneapolis, Minnesota, and Tim Leighton is the communications coordinator at the Minnesota State High School League and a member of the High School Today Publications Committee.