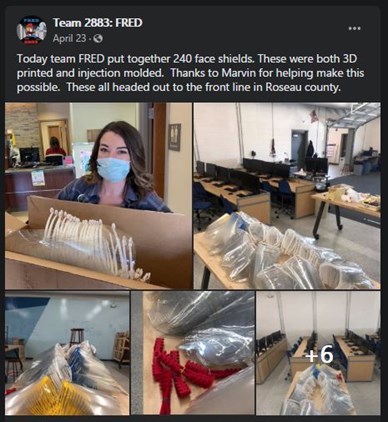 When their seasons were brought to an abrupt halt due to COVID-19, students of the Minnesota high school robotics community put their creativity to use by developing thousands of face masks, face shields and ear savers for frontline works and the immuno-compromised.

Minnesota students compete under the guidance of FIRST (For the Inspiration and Recognition of Science and Technology) and the Minnesota State High School League (MSHSL). At the time of the season’s stoppage in late March, only about half of the teams had competed in regional competition.

Among the early contributors were the Robettes from the Mendota Heights (Minnesota) Visitation School, which made fabric masks. The Babbitt Northeast Range School’s Iron Mosquitos made news soon after they revamped the team robot to transport groceries from the store to customers’ cars.

“I’ve been in awe, amazed, and even a little bit not surprised knowing they have this skillset,” Dohery said. “It’s a pretty amazing group of students that you see at these robotics tournaments. You look and think, ‘How do they know what they are doing?’ The fact that they use these engineering skills to do this is just amazing to me.” 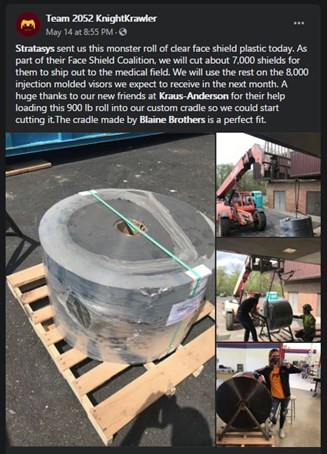 Irondale’s efforts started with coach Scott Davis and members of his team employing the use of their school’s seven 3D printers to print face shields. Forty-eight hours later, and thanks to help from the school principal, Davis and his team had the school district’s entire allotment of 3D printers which allowed them to run all 24 for 10 hours a day, six days a week.

“Irondale was one of the first to start face shield production, along with creating a web-site to collect orders, and helping coordinate efforts among many teams,” Doherty said. “They have already created thousands of face shields for frontline workers at numerous local hospitals, law enforcement, elderly care and other facilities. KnightKrawler has also shared thou-sands of clear plastic parts to other teams to assist in their PPE production.” 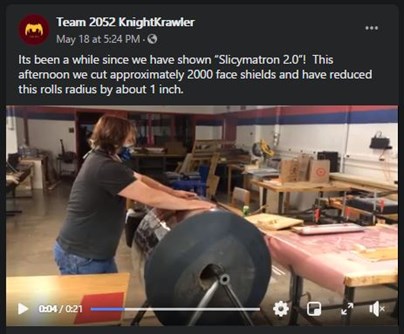 In addition to the face shields printed at the school, Davis contributed his time at home to printing ear savers from leftover 3D printing filament.

As of May 26, the hard work of KnightKrawler accounted for nearly 26,000 face shields. Of those, 11,800 were shields without visors, which were components desired by many other groups.

“Teams all over were having trouble getting just the shield,” Davis said. “One of our mentors works at 3M and assisted us in getting large spools of filament.”

Davis said receiving those two large spools allowed his team to print as many as 11,000 shields, which assisted other schools and groups that did not have a way to cut their plastic.

More than 1,500 miles to the southwest, the Navajo Nation had emerged as a COVID-19 hotspot. Outside of New York and New Jersey, it has been one of the most severely impacted areas in the United States.

News of the work done by Minnesota schools spread to Arizona, resulting in requests coming from the Navajo Nation for face shields.

Previously unaware of the severity of the situation in Arizona, Davis said he and his team acted quickly to provide face shields to the Navajo Nation. The Irondale team consequently collaborated with a team in Flagstaff who created 500 visors for the shields, meeting the needs of the Navajo.

“Everyone has overwhelmed us with support and generosity for our work,” Davis said. “I think a lot of people are stunned and beyond impressed with how much a high school team can contribute to so many in need. If you had asked me, I wouldn’t have believed it either.”

In Warroad, located near the Canadian border in northern Minnesota, coach Jeremy Culleton explored printing options with his students.

Marvin Windows, a major manufacturer based in Warroad, reached out to the team to see how they could assist. Through those conversations, the team received access to injectable molds that allowed them to begin laser engraving face shields, in addition to those they had printed.

According to Culleton, the team had as many as five printers in operation, including two running 24 hours a day at the home of senior Tereza Hruba. Her work transitioned from N95 equivalent masks to face shields and later ear savers.

“It’s kind of remarkable that we have the technology to make this kind of thing happen for schools,” Culleton said. “Our students ended up taking 3D printers home. (Marvin) continued to inform us to let them know if we needed any additional resources. It was huge to have that backing.” 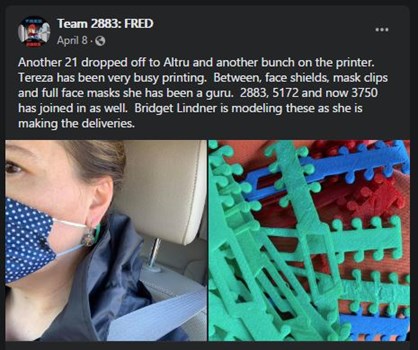 While the team did not initially track totals, Culleton estimates that more than 1,500 face shields each and close to 23,000 ear savers have been made between Warroad and Greenbush (Minnesota) Middle River Gator Robotics. He added ear savers have been an emerging need as more restaurants are reopening for business.

On deck for Warroad is the development of 10 to 20 intubation boxes for the state of Minnesota. Intubation boxes are a form of personal protective equipment for doctors that allow them to safely access COVID-19 patients for tracheal intubation while blocking airborne droplet and aerosol virus transmission. Boxes are designed with two arm holes that allow for unrestricted movement during the intubation process.

While there was optimism from teams statewide to compete for state and world championships, Davis said a lot of positives came out of the unfortunate circumstances.

“We were in the middle of a season. KnightKrawler had qualified for state and world championships, and this was our eighth year in a row qualifying for those. We had a really spectacular robot,” Davis said. “However, doing what we have done has especially allowed our seniors to have a sense of accomplishment beyond a couple of early season victories. They did something so much more positive.”

It’s really giving a lot of exposure to our sport that I don’t think we would have typically received otherwise,” he added. “Our community is realizing how much of an impact these kids can have.”