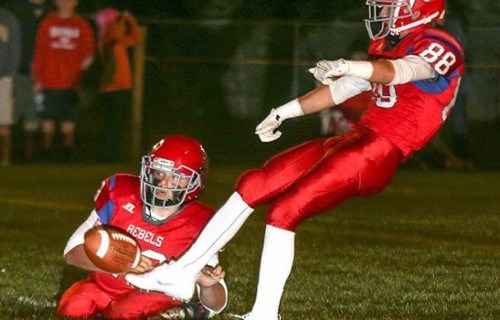 Danny Lilya, a sophomore student-athlete at Moose Lake (Minnesota) High School, has been selected the 2017 national recipient of the “National High School Spirit of Sport Award” by the National Federation of State High School Associations (NFHS).

Like most other students at Moose Lake, a school with only 184 students, Lilya plays a variety of sports. Unlike those other students, however, Lilya was born with a broken back, is a paraplegic, and has been confined to a wheelchair his entire life.

However, that has not prevented him from participating in the sports he loves.

Among those are football, sled hockey, wheelchair softball and track. Last fall, Lilya was the holder on extra points and field goals for the Moose Lake/Willow River Rebels football team. He also plays left wing for the Minnesota Wild competitive sled hockey team, where he is 10 years younger than the rest of the athletes on the team. During the past three years, he has attended the USA Hockey sled hockey development camp in Buffalo, New York.

A National Wheelchair Softball Association player with the Junior Rolling Twins in a Minneapolis suburb, Lilya has competed in Baltimore, Chicago and Nebraska.

As a result of his involvement in these activities, Lilya has been featured on numerous media outlets. Among those are Twin Cities television stations WCCO-TV and KSTC-TV/Channel 45, as well as on CNN.

As a participant in Moose Lake athletics, Lilya clearly benefits from having a forward-thinking football coach in Dave Louzek.

“Part of Rebels football has always been including everybody,” Louzek began. “Danny has displayed a great deal of courage in overcoming the challenge of participating in high school football while confined to a wheelchair without the use of his legs. As a holder for our extra point/field goal unit, he proves that anybody who is willing to work hard and truly wants to contribute can play an important role on a team and in life.”

When it’s time for Lilya’s role in the game, he wheels out on to the field and climbs out of the wheelchair, which is then brought to the sideline. He receives and holds the football while sitting on both knees. After the kick, someone brings the wheelchair back on the field and Lilya climbs back in. Just like any other high school special team player across the country, he says “It’s just the best feeling in the world,” when he gets into the game.

Lilya’s father, Dan, noted, “The wheelchair kind of becomes invisible … he is every bit part of that program as are the able-bodied athletes who are out there.”

Perhaps Lilya himself summed it up best when he said, “The wheelchair doesn’t define you. If you want to do something but you’re disabled, if you have the right mindset, you can still go out there and do it.”

Nominations for this award were generated through NFHS member state associations and reviewed by the NFHS National High School Spirit of Sport Award Selection Committee composed of state association staff members. While the national winner will be recognized June 29 at the NFHS Summer Meeting in Providence, Rhode Island, the section winners will be recognized within their respective states and will receive awards before the end of the current school year.

The National High School Spirit of Sport Award was started in 2008. Including this year, 10 individuals and three teams have been chosen national award recipients.