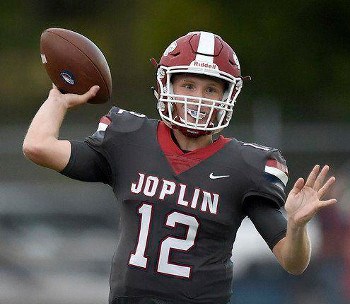 From the Joplin Globe:

The National Federation of State High School Associations confirmed on Monday that Tash’s career completion percentage of 73.6% from 2017-19 is the new all-time record, surpassing Heritage High School’s Garrett Grayson’s mark of 71.6% set in 2009 in Vancouver, Washington.

“It is super special to me just to realize that all of the hard work I put in, and my teammates put in, over the years really paid off,” Tash said. “Ever since I was in third grade and started playing tackle football, I wanted to be the best at my position, and that has always been a goal for me. Coming away with this record is really special.”

Tash earned the starting role at quarterback for the Eagles his sophomore season in 2017, something he was not expecting.

“Starting as a sophomore was a big surprise to me,” Tash said. “I was only 15 years old, and I wasn’t even driving myself to practice, my mom was dropping me off. That was a big step for me because I was a young kid in charge of going out and leading our team on Friday nights.”

Read more from the Joplin Globe