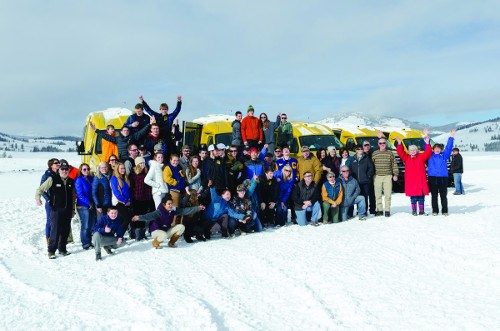 Traveling from Gardiner (Montana) Public Schools to West Yellowstone (Montana) Junior/Senior High School in the fall is a short 55-mile bus trip through Yellowstone National Park. “Short” is relative to the average two-hour, one-way road trips for away games that teams are accustomed to at Gardiner.

This path through the national park has been traveled so many times by Gardiner teams that the views and wildlife that stop 3.5 million tourists every year are familiar and mundane to the Gardiner coaches and athletes.

“Coach, we see the park all the time,” said Dave Perius, former athletic director and Montana High School Association board member and current Gardiner teacher and coach, when explaining the reaction of his teams to traveling through the park.

While tourists from all over the world pull over to take pictures and admire the beauty of roaming bison or make their way to Yellowstone’s steaming terraces of Mammoth Hot Springs, Gardiner team buses move through like native New Yorkers walking through Times Square with their heads down, weaving through pedestrian traffic stopping to gawk at the lights and unusually dressed people.

“We typically, in the winter, would have to go through Bozeman, around and down Highway 191, and that takes about threeand- a-half to four hours,” Perius said.

Gardiner is located at the northern and only year-round entrance into Yellowstone National Park. The west end of the only school building for all kindergarten through 12th grade students is located within the boundary lines of the state park. The school is only two miles north of the 45th parallel of latitude, which means it is only 2 miles closer to the North Pole than it is the equator. This location puts it in the heart of the greatest migratory wildlife ranges of the temperate zones of the world.

The families of the approximately 200 students who attend Gardiner Public Schools are deeply rooted in Yellowstone National Park. Many work within the park or in the tourism industry of Gardiner. 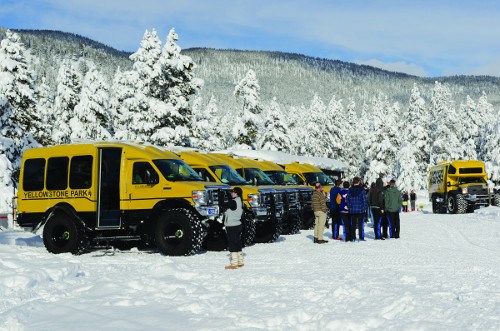 Gardiner Public School is so intertwined with Yellowstone that it was the creation of the National Park System by President Theodore Roosevelt in 1872 that gave birth to the school in 1885. The one-room, log cabin school house is now a modern school building situated adjacent to Arch Park, location of the Roosevelt Arch.

The relationship between the school community and the park provided an opportunity for the 2017-18 boys and girls basketball teams to cut the winter travel time from Gardiner to West Yellowstone in half and to experience a Yellowstone winter firsthand. Athletes, coaches and parents who have become accustomed to the beauty that surrounds them in the summer rarely get to experience the majesty of Yellowstone in the winter.

“Through some individuals that work with Xanterra Parks and Resorts and their relationship with our school, they agreed to take us over to West Yellowstone by snowcoach,” Perius said. “These big snowcoaches, big busses with huge tires that are around 4 feet tall, are the only transportation into the park other than snowmobiles.”

The lifelong residents and employees of the park became tourists during their snowcoach road trip through Yellowstone National Park. “Five snowcoaches took two teams (boys and girls basketball), coaches and some parents,” Perius said. “We saw bison, a wolf, coyote, bull elk, bald eagle, geese and ducks along the way.”

A trip through the park that would typically take about two hours by snowcoach took the Gardiner teams a little longer as they seized the opportunity to enjoy the unique experience provided by the cooperation of the Gardiner and Yellowstone communities.

“I just can’t explain how beautiful it is in the winter time,” Perius said. “It’s so different than the summer. Most kids don’t get there in the winter.”

The deep history and positive relationships built and sustained by Gardiner Public School, Yellowstone National Park and Xanterra Parks and Resorts provided an opportunity for the Gardiner teams to not only cut their drivetime in half, but to become tourists in their own backyard.

Though the future of road trips like this one is uncertain, the Gardiner coaches hope to share the grandeur of Yellowstone winters with future teams. “We hope to keep doing this. It’s fun for the kids and it’s quite a unique experience,” Perius said.

The Gardiner basketball teams finally got to experience the natural beauty that has always been so close, yet off limits just while traveling to play a game.