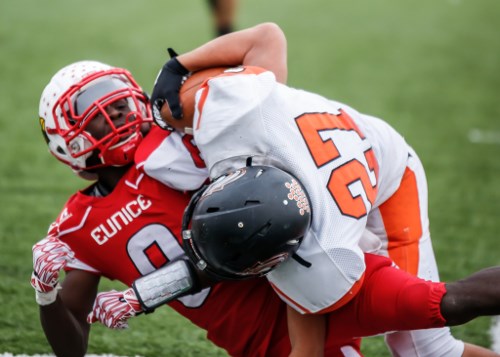 From the New York Times:

Facing a significant decline in the number of students playing high school football, the New Jersey State Interscholastic Athletic Association on Wednesday adopted new guidelines to sharply reduce the amount of contact allowed in practices and, in doing so, address concerns about player safety.

The new rules, which the association said were the most restrictive in the country, limits the time that teams can engage in full-contact drills in practice to 15 minutes a week, down from the 90 allowed under the old rules. Preseason full-contact drills, previously unlimited, will be reduced to six total hours, including scrimmages.

The existing ban on full contact in spring and summer practices in New Jersey remains in effect. New Jersey officials said that other states are considering similar restrictions as concerns about head injuries continue to grow.

“I think this is a positive thing based on what we know now about player safety and the more education that we are all getting all the time about how to keep players healthy,” said Kevin Carty Jr., the coach at Hillsborough High School in central New Jersey.

The New Jersey association said it implemented the rules on the recommendation of the New Jersey Football Coaches Association and Practice Like Pros, an organization that advocates the exact limits on practices that have now been adopted by New Jersey.

Full contact is considered tackling that brings a player to the ground.

Guidance for State Associations to Consider in Re-opening High School.