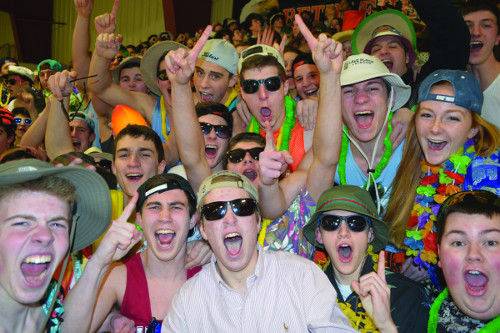 Trophies and banners are usually reserved for tournament or state champions in high school athletics. However, in the state of New York, banners and trophies are also being awarded to student-athletes who win and lose the right way.

“Schools and communities take great pride in winning one of our banners,” said Todd Nelson, NYSPHSAA assistant director. “It’s something that athletic administrators can use to relay the point to their student-athletes and coaches that sportsmanship needs to be at the forefront.

“Everyone wants to win and be successful, but sportsmanship still needs to be at the forefront of their goals and objectives.”

The opportunities to exhibit and be recognized for sportsmanship by the New York State Public High School Athletic Association (NYSPHSAA) are four-fold.

The organization’s longest-running sportsmanship endeavor is the Sportsmanship Promotion program, which began 12 years ago. All 783 member schools in the state complete a survey designed to assess how well schools are promoting positive sportsmanship within their athletic departments. Each survey asks schools to rate 10 statements about the behavior of their players, coaches and fans, and send those answers to the NYSPHSAA. After being sorted by section, anywhere from 44 to 55 schools (four to five per section) are selected as plaque award winners.

Some of the winners are then nominated by their section to go on to the next round, in which they are required to provide more in-depth documentation of the policies, procedures and practices they employ to promote positive sportsmanship. An NYSPHSAA committee comes together to choose one to three schools that have done an exceptional job and those schools are recognized at the NYSPHSAA’s annual summer meeting. More importantly for most of the students, each school also receives a banner to hang in its gym.

To help keep the idea of sportsmanship in the forefront of the NYSPHSAA’s mission, Nelson said Sportsmanship Promotion program winners are also recognized and given a t-shirt at each of the state championship’s award ceremonies.

Another opportunity that allows students to show off their sportsmanship is the NYSPHSAA Battle of the Fans competition. Borrowed from the Michigan High School Athletic Association three years ago, the Battle of the Fans runs through the winter sport seasons and requires school districts to submit a three-minute video on why their schools have the best student cheering sections in the state. The NYSPHSAA chooses the top three video submissions and presents a plaque to those schools.

Staff members then visit the finalists during a competition of their choosing. Last year, each school chose one of its home ice hockey games. Students are interviewed and recorded during the game, and those videos are posted to the NYSPHSAA website for voting. The school that receives the most votes by percentage is crowned the Battle of the Fans champion.

“Schools take great pride in this,” Nelson said. “The past two winners have had problems in the past with sportsmanship at their schools, and they used this as a tool to work with their student section to promote positive sportsmanship and have seen a positive change in their student-athletes.”

The final two components of the NYSPHSAA sportsmanship initiative are offered with the help of outside organizations – Time Warner Cable and the National Association of Intercollegiate Athletics (NAIA).

Two years ago, the NYSPHSAA teamed up with Time Warner Cable and provided all of its member schools a “Stay in the Game” banner. As long as the school goes the entire year without any disqualifications for unsportsmanlike behavior from a coach or player at any level, it receives a decal indicating the year of achievement. Furthermore, the section with the highest percentage of schools to meet the criteria each year wins a trophy.

That same year, the NAIA and the NYSPHSAA began working together on the NAIA Five-Star Leadership School Award Program. School districts have to complete five stars throughout the year – three dealing directly with the NYSPHSAA and its leadership goals and two dealing with the NAIA’s leadership program. If they successfully complete all five stars, the NAIA recognizes them with a banner or decal for subsequent years.

No matter what awards it gives out, Nelson said the NYSPHSAA hopes its multifaceted approach to sportsmanship promotion lasts another 12 years and more.

“[In the beginning], it was just our desire, as an education-based athletic association, to promote positive sportsmanship from our member schools and student-athletes,” Nelson said. “It’s just an extension of what we’re about in terms of interscholastic athletics.”

Juli Doshan is the graphic arts technician/editorial assistant in the NFHS Publications and Communications Department.