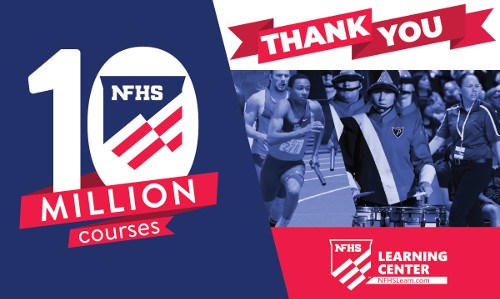 The NFHS Learning Center ushered in the new year on January 7 when it eclipsed 10 million course deliveries since it started in 2007.

The feat comes after 2019 marked its busiest year as nearly two million courses were taken by more than three million coaches, administrators, students and parents who comprise the educational resource’s growing audience.

In 2019, the Learning Center expanded to more than 70 online education courses with the debut of six courses and the revision of six others. Among the new courses were “Understanding Vaping and E-Cigarettes” and additional tracks to “Understanding Copyright and Compliance.”

“It’s not just that there were 10 million page views or that 10 million people have read an article; 10 million courses have been taken for a minimum of 20 minutes,” said Dan Schuster, NFHS director of educational services. “The individuals taking those courses have given us their attention for those 20-plus minutes because they want to help kids. While I think 10 million is just scratching the surface, I really think we are just now starting to involve all constituents of interscholastic athletics and activities.”

The Learning Center was founded as the online Coach Education Program in 2007 with two courses – “Fundamentals of Coaching” and “First Aid for Coaches.” Its launch occurred as part of an NFHS focus on providing learning opportunities to coaches both in and out of a school setting. In that year, the program delivered an estimated 15,000 courses. In subsequent years, the total courses taken tripled and even quadrupled as an increasing number of NFHS member state associations established the two core courses as a coaching requirement.

“We had so many coaches coming from outside of the classroom who we needed to speak our language and to understand what it meant to be a teacher, as well as an interscholastic coach,” Schuster said. “That was – and still is – the most important aspect in understanding the mission and purpose of interscholastic athletics and activities.”

The next leap made by the Learning Center came in 2010 with the introduction of “Concussion in Sports.” The first course to be available at no cost, “Concussion in Sports” was developed in partnership with the Centers for Disease Control and Prevention (CDC) to properly educate coaches, officials, parents and students on the importance of proper concussion recognition and management in high school sports. Its impact is incalculable as it has garnered the attention of countless new NFHSLearn members. To date, the five million courses taken make up nearly half of the Learning Center’s total deliveries.

“People were excited when we were essentially on par with what we had been implementing,” Schuster said. “Before you knew it, we were doing 65,000 ‘Fundamentals of Coaching’ courses per year. Then you start adding free courses and doing almost two million courses per year. That sort of culture shift creates change. You have more and more people speaking our language because we’ve told them what it is.”

As the Learning Center moves forward, it does so with the ever-present goal of meeting the needs of the NFHS membership. In addition to increasing opportunities for coaches, the Learning Center has worked quickly and efficiently to provide health and safety courses as prevalent issues arise nationwide. In 2019, the response to the rising number of deaths linked to e-cigarettes or similar devices resulted in the development of the “Understanding Vaping and E-Cigarettes” course with support from the Office of the U.S. Surgeon General.

Last year, the Learning Center developed its first non-course offering. “The Parent Seat” video debuted in August to assist coaches and athletic directors in explaining the role of parents on game day, as well as how they can manage their emotions in an interscholastic setting. The short video suggests 10 tips that parents can use to develop and maintain a calm, respectful demeanor. The video is also the most recent example of how the Learning Center strives to positively impact the coaches, administrators, officials, students and parents associated with athletics and activities through its 70-plus course offerings, including more than 35 of which are free.

“We continue to listen to our membership and continue to expand on relevant and pertinent topics for schools,” Schuster said. “The NFHS is an organization that provides programs and services to its membership. What could we do other than to provide education with leading organizations like the CDC to help our schools at no cost? We really took it to heart that we needed to continue to be ahead of those type of topics for our membership. There are a lot of coaches, administrators, students and parents out there, and we all could use a little bit of help and we want to continue to be a resource for them all.”