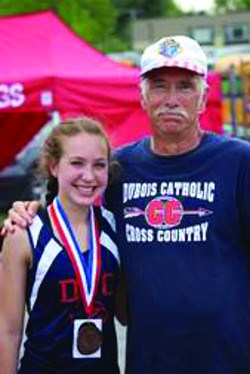 In 2014, Tom Shade was a recently retired track and field coach in DuBois, Pennsylvania. However, instead of quietly exiting the coaching and education worlds, Shade was drawn back to the track by tiny DuBois Central Catholic School. The school hired Shade to coach the boys and girls track teams and help resurrect the lagging programs.

Under Shade, the teams have experienced unprecedented success and served as an example of how a small school can revive sports programs. In just four seasons, the track and field programs have seen participation soar to 70 team members and 92 school records set in all 18 events. In 2016, DuBois Central Catholic was ranked fifth in District Nine, unheard of for the school that regularly graduates only about 25 seniors each year.

“I look at what’s happened being the result of two old standbys,” Shade said. “Tons of hard work by everyone and quality teammates.”

While the boys team had been around since 1970 and the girls since 1977, the programs were close to dormant in 2014 when Shade took over. The team was coached by a volunteer who simply had a daughter on the team. In addition, the school doesn’t have its own track facility, forcing it to use a local track used by the city’s junior high for practice. Often, teams can’t utilize the facility until after 5 p.m. with student-athletes who live up to 45 miles away.

Shade’s initial goals were two-fold: convince as many students as possible to participate and research the history of the program. A large honor-roll poster was created showcasing the top performances in each track and field event in the school’s history.

“It was hung on the wall near the gym, so every student would be able to look at it,” Shade said. “The poster proved to be a motivator, as many athletes strived to get a higher ranking or shoot for the school record.” 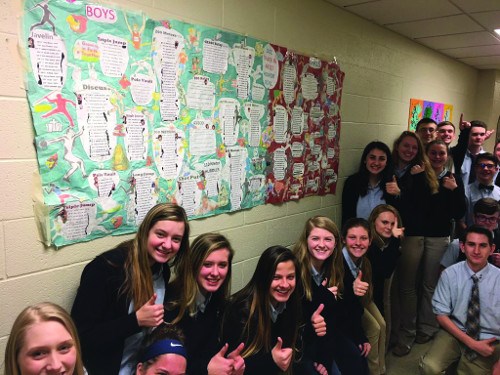 Shade also worked the cafeteria to recruit new athletes to the program.

“All the students in grades 9-12 eat during the same period, so it was just a matter of sitting down at each table to ask the kids to participate.”

Shade encouraged participation regardless of ability and those who had never considered track and field; there was a place for everybody on the track and field team. It worked. By the end of the 2014 season, the team’s numbers had quadrupled, and it had athletes competing in all events. DuBois Catholic had its first district champion and 10 school records were set, impressive for a program that had never won a dual meet.

The success did not go unnoticed. Another local school was looking for a way to keep its track and field program alive and asked to co-op with DuBois Catholic.

“The idea was to spread the track and field experience to as many students as possible,” Shade said. “I took a deep breath and decided to make it work.”

With the increased size of the teams, Shade was now coaching all 18 events for both boys and girls teams, with just the help of a parent volunteer. Another challenge was transporting all the equipment to the off-site track each day for practice. It was common for Shade’s car to be jammed with javelins and poles sticking out the windows and the back end weighed down with shots, discus and starting blocks.

“I worried each day that those vaulting poles were going to hit another car or that a pedestrian would get knocked over,” Shade said. 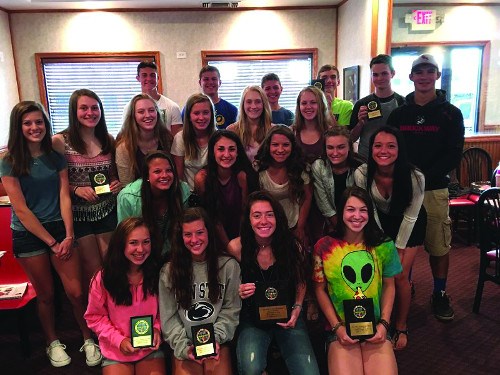 “There have been a lot of growing pains,” Shade said. “But, to see track come alive, it’s great.”

Shade officially retired again after the 2017 season, but, with no successor in place, he has once again delayed his retirement to make sure the program is in good hands.

“I don’t want to leave a program in poor shape for the next coach. It is tempting to just start a new life and put DuBois Catholic track behind, but many students and school officials have put in time and it’s not easy to abandon them,” Shade said. “It has been quite a ride to see the changes. But, the most gratitude is for the students who said ‘yes’ to track and put in the work.”