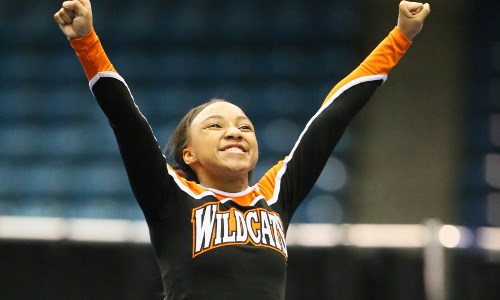 The National Federation of State High School Associations (NFHS) Spirit Rules Committee revised several rules for the 2017-18 season, including adjustments to release transitions and inversions, in an ongoing effort to minimize risk of injury for participants in high school cheer and dance.

All rules revisions recommended by the committee at its March 4-6 meeting in Indianapolis were subsequently approved by the NFHS Board of Directors.

The term “static” was removed from several places in the rules book and replaced with wording that more clearly defines the intent of the rules. One particular example involves allowing braced extended stunts to transition in such a way as to allow for more creativity and better technique.

Rules 3-3 and 4-3 had extensive revisions to reduce risk of injury for the top person in a stunt in cheer and dance. The rules were reorganized and clarify the requirements that must be followed in order for the top person to be in an inverted position.

Rules 3-3-8 and 4-3-8 were also added to prohibit a swing roll-down stunt because the person in the swing is being moved facedown toward the performing surface. Additionally, in Rule 3-3-3, inverted stunts that go to a non-inverted position may pass through the inversion without having to stop in a stationary position. This change will allow more creativity and proper technique for certain inverted skills.

Rule 3-8-2 in cheer and Rule 4-8-2 in dance now state that props cannot be held in the hands during tumbling skills, where the supporting hands are not on the performing surface. The committee believes props are a safety concern when a tumbler is using her/his hands for support during a cartwheel or round-off.

In addition, the Spirit Rules Committee approved revisions or removal of 11 definitions in Rule 1.

“The revision of definitions is to ensure accurate understanding of rules by clarifying the language and removing repetitive definitions,” Weaver said.

A complete listing of all rules changes will be available on the NFHS website at www.nfhs.org. Click on “Activities & Sports” at the top of the home page, and select “Spirit.”

According to the most recent survey of NFHS-member state associations, there are more than 400,000 high school cheerleaders in the United States and, as of 2015-16, about 130,000 of those participants are involved in competitive spirit squads. The 2015-16 NFHS High School Athletics Participation survey lists competitive spirit as the ninth-most popular sports for girls. There are also about 43,000 girls who participate in dance or drill/pom teams, according to the same survey.