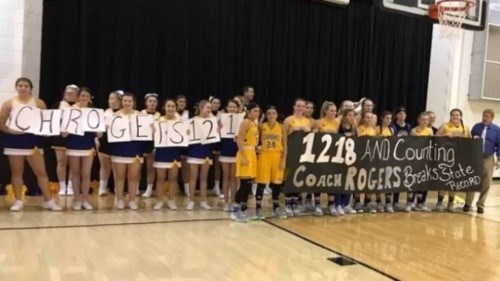 Clarkrange’s 46-26 win over previously unbeaten Pickett County High School pushed Rogers past former Charleston High School and Cleveland Bradley Central High School coach Jim Smiddy as the new leader in the Volunteer State, one of the most tradition-rich states in the country for girls basketball.

“We had to earn it last (Friday) night,” said Rogers. “Pickett County has a good program, and Coach (Brent) Smith does a good job. It was good to get it behind us. Everybody was asking about it and I think the girls felt a little pressured to be successful.”

Rogers, who has coached his entire 44-year career at Clarkrange, improved his record to 1,218-272 (.817 winning percentage) with the Lady Buffaloes’ latest triumph and passed Smiddy on the national girls basketball coaching wins list, moving from up from fifth to fourth all-time. He is currently second on the national ledger for active coaches and trails only Joe Lombard, who has led Canyon (Texas) High School’s girls basketball program to a 1,356-125 record over 42 seasons. He’s now fewer than 100 victories from the all-time record.

Rogers has delivered all eight of Clarkrange’s Class A state championships, which included three in a row from 1983 to 1985, back-to-back crowns in 1990 and 1991, and an undefeated 39-0 campaign that culminated in the 2009 championship. He has also produced three runner-up finishes (2008, 2015, 2017), more than 20 appearances in the Tennessee Secondary School Athletic Association (TSSAA) state tournament, two TSSAA Miss Basketball recipients and 36 all-state selections.