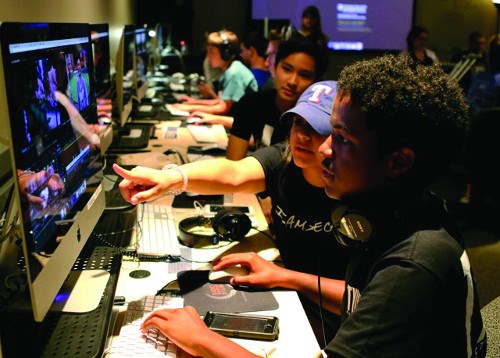 The after-party for my senior prom was not exactly the typical high school scene.

Instead of hanging out with the other seniors into the wee hours of the night, I packed an overnight bag, grabbed my reporter’s notebook and drove to my high school journalism teacher’s house to head to Austin, Texas, for the state scholastic journalism convention.

That was my senior prom after-party.

And what a party it was. I showed up for the Interscholastic League Press Conference (ILPC) Grand Awards Assembly in my black-and-blue velvet prom dress and spiked black heels, eager to scoop up our awards for that year.

We were going for gold, and I was dressed for the occasion. After all, we, The Panther Prints staff, were the reigning state champions, and as editor of the newspaper that year, I was dying for a repeat performance.

I wish I could tell you that it was a perfect ending – we won, and everyone loved seeing me in a ridiculously uncomfortable, formal dress – but that’s not what happened. We took second, and my prom dress went mostly unnoticed.

But to this day, I don’t regret skipping the prom after-parties to attend that award ceremony in Austin.

Journalism was my life in high school. It provided me purpose and drive. It gave me a venue to shine and to make a difference.

No post-prom party could do that. I sensed that as a 17-yearold, and now, almost three decades later as the ILPC director and Texas University Interscholastic League (UIL) journalism director, I’m more sure of it than ever.

In Texas, we take our high school journalism seriously – so much so that we have two different arms of scholastic journalism within the University Interscholastic League. We have ILPC, one of the largest scholastic press associations in the country, and we have the UIL’s spring district-to-region-to-state journalism write-offs.

ILPC offers our schools a chance to compete with the actual products students produce for their schools – newspapers (both print and online), yearbooks and broadcast programs. We even have a contest for our advisers to encourage them to report and write and shoot photos.

We offer students a variety of opportunities because we know even if our students don’t pursue journalism as a career, the skills they learn in journalism last a lifetime.

“Every job is journalism, basically,” said Charla Harris, the journalism adviser at Pleasant Grove High School outside Texarkana. “Students learn how to collaborate and create, how to communicate with others, how to write effectively, how to behave professionally, how to interact with others on a variety of levels, how to think, and that’s just for starters.”

No other school program offers as many life skills to students, said Ray Westbrook, the adviser at St. Mark’s School in Dallas, Texas.

“The end product is nearly secondary in importance to the training and experience students get daily in planning, empathy, sensitivity, group work, research, interviewing and telling stories,” Westbrook said.

ILPC also provides critiques and ratings and offers individual contests where schools can enter a single piece of work, like a broadcast news story, an in-depth newspaper feature package or yearbook coverage of a sport. Each year, we recognize hundreds of students for their efforts and excellence. 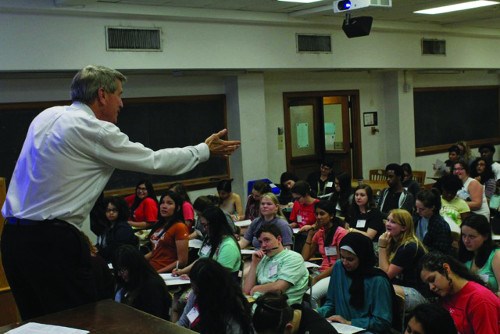 Rebecca Plumley of Stony Point High School outside Austin said the individual contests give her students a chance to compare their work against all comers – and each year her kids bring home a fistful
of medals.

“Being at a diverse school with quite a range in socio-economic status, language proficiency and skill level, I’ve found that it takes a while for my students to mentally process their achievements,” said Plumley, the 2016 ILPC Teacher of the Year. “But once they understand that no one is joking, that they are state winners, the quiet wait is so worth it. At that moment, my kids leave believing what I have always known as truth: they can achieve anything.”

ILPC celebrates the winners each spring during its annual convention, held at the University of Texas at Austin, attended typically by 1,000 or so students and teachers, who come in from all corners of the state to tour the capitol, wander the UT campus and attend sessions conducted by some of the nation’s finest teachers and practitioners.

Mike Williams, the adviser at A&M Consolidated High School, said the convention also “gives us the opportunity to network with other schools. I love that my staff trades papers with a large number of other schools across the state. It’s another opportunity to learn.”

A Pulitzer-Prize winning photographer and former Texas scholastic journalist, John Moore comes every year to share his images and experiences in places like Afghanistan, Syria, Iraq and Liberia, where he photographed an Ebola outbreak.

In Moore’s 2014 keynote speech, he told the students how he got his start in journalism after taking a “Photo 1 class, because I thought it would be fun and easy.”

At the time, Moore barely knew which end of the lens to look into, but now, more than 25 years later, he says, “It’s the reason I walk the Earth.”

ILPC also hosts a three-day summer workshop for scholastic journalists to hone their skills and prepare for the upcoming school year.

“ILPC spring conventions and summer workshops were the first learning opportunities I encountered when I started teaching,” Plumley said. “From a new teacher standpoint, I was in awe of the amazing wealth of knowledge that came together at these multiday gatherings. In sessions, I’d scribble notes as fast as my student editors who attended the events with me.”

Melonie Menefee, who advises both the newspaper and yearbook in tiny Buffalo, Texas – located about halfway between Dallas and Houston – said the opportunities and events that the state scholastic organization provides is critical for her students to learn and grow.

"So often, students in rural areas are very limited in what they are exposed to in their learning experiences,” she said. “Scholastic journalism is one way for students to expand their knowledge base.”

While ILPC membership is limited to those schools that publish newspaper and yearbooks and choose to join, virtually all schools compete in the UIL’s spring academic program, whether they publish or not. The four spring journalism contests are News Writing, Feature Writing, Editorial Writing and Headline Writing. Last year, UIL also piloted a 15-minute copy editing contest.

“It was always a treat for me to award medals to students from schools with little or no journalism program,” said former UIL journalism director Bobby Hawthorne. “These kids ordered contest material, practiced hours on end and attended invitational meets – all in hopes of qualifying to the State Meet in Austin and then walking up on the LBJ Library stage and having a medal draped around their neck.”

Texas is a big and diverse state, and it’s only appropriate that the UIL offers a wide variety of contests for its scholastic journalists, who may show up wearing their prom dress and heels or their jeans and cowboy boots.

Jeanne Acton is the assistant academic director and journalism director for the Texas University Interscholastic League in Austin, Texas.