Seeing the Stripes in Officials’ Assignments 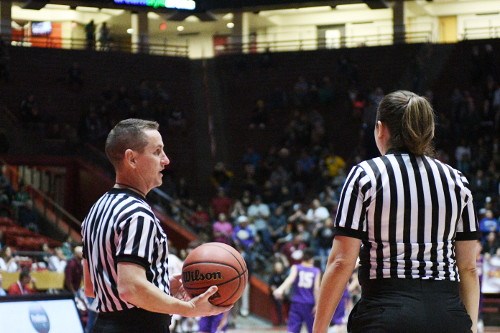 It is hard to believe that in 2018, these were statements yelled by fans in the stands, when the New Mexico Activities Association assigned three women to boys’ finals at the NMAA State Basketball Championships.

The date was Saturday, March 10, 2018.  History was made once again in New Mexico when Candace Aragon of Las Cruces, New Mexico, Erin Dunavant of Bayfield, Colorado (representing the Farmington Basketball Officials Association) and Rebecca Skoterro of Albuquerque, New Mexico, were assigned to boys’ state final games.

The leadership of the New Mexico Activities Association and New Mexico Officials Association, including various assignors and evaluators, believe that state associations need look at referees just as referees, seeing the stripes instead of the gender wearing them.  Officials are assigned based upon ability and evaluation. It has been commonplace for men to work women’s contests throughout the history of athletics and the NMAA and NMOA believe that ability should be the number one qualifier to work a final.

Aragon and Dunavant are no strangers to making history at the NMAA State Basketball Championships, as two years ago, they were on the first ever all female crew to work a girls’ state championship game on the 5A contest that featured the Gallup Bengals and Roswell Coyotes, along with Yolanda Osuna of Albuquerque.

At the 2018 state championships, Skoterro was the U1 on the Class A boys’ state championship game between the Melrose Buffaloes and the Maxwell Bears.  This was Skoterro’s first state tournament selection, having served as an alternate referee at last year’s event.  Skoterro’s partners were Robert McDonald of Silver City and Bobby Sitton of Cortez, CO (working out of the Farmington, NM association).

Dunavant was the crew chief on the Class 5A boys’ state final game between the Belen Eagles and the Espanola Valley Sundevils.  The game drew the largest crowd of the tournament, with an estimated 13,000 fans in attendance.  Dunavant’s crewmates were David Montoya of Albuquerque and Carl Vigil of Las Vegas, NM (representing the Santa Fe Basketball Officials Association).

Aragon was the crew chief on the Class 6A boys’ state championship game between the Atrisco Heritage Academy Jaguars and the V. Sue Cleveland Storm, a contest that went down to the wire. Class 6A is the largest classification in New Mexico.  Aragon’s partners were Walt Sanchez, also of Las Cruces, and Roberto Torrez of Albuquerque.

The hope of Aragon, Dunavant, Skoterro and the NMAA and NMOA is that young women who see them  working games on both the boys’ side and girls’ side understand that officiating is something they can do in the future.  Through hard work, dedication and commitment, the sky is the limit for this generation of female referees and the ones who follow.

The time is now.  A quality official is a quality official.  It takes a shift in culture and mindset in some areas to ensure that officials are assigned based on ability, regardless of classification or the gender of the athletes.  In the words of Gandhi, “Be the change you wish to see in the world.”

Dana Pappas is the Commissioner of Officials/Deputy Director of the New Mexico Activities Association.