Self-start Initiated in Girls Lacrosse to Increase Pace of Play 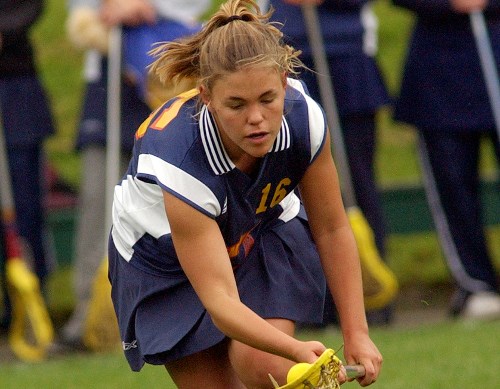 In an attempt to increase the pace of play in high school girls lacrosse, self-start has been adopted for restarting play outside of the critical scoring area.

All 2019 rules changes recommended by the joint National Federation of State High School Associations (NFHS) and US Lacrosse (USL) Girls Lacrosse Rules Committee at its June 18-20 meeting in Baltimore, Maryland, were subsequently approved by the NFHS and USL Boards of Directors.

The adoption of the new self-start in girls lacrosse decreases the amount of involvement by officials in restarting play, thus increasing the pace of the game. The new Rule 5-4 “Restarting Play – Self-Start” establishes the specific allowances for restarting play with a self-start. Additionally, Rules 5-4-2 and 5-4-3 outline procedures for the defense during a self-start and establish that failure to move away from the free position may result in a warning, and repeated failures may result in a delay of game penalty.

The new Rule 5-4-4 establishes that the self-start is not an option when:

“The Girls Lacrosse Rules Committee did an outstanding job to evolve the rules of the game in ways that encourage pace of play, the enjoyment for athletes and growth of the sport, while reinforcing the safety of our game,” said Caitlin Kelley, the USL liaison to the rules committee.

Another significant rule change is the establishment of a penalty zone that must be cleared when a defensive player commits a major foul in the 8-meter arc. The committee advanced this safety-based change to minimize risk around 8-meter free positions as well as to increase pace of play by limiting repeated obstruction calls.

In Rule 10-1-1, the committee established that a penalty zone is the area 8 meters away from the goal circle above the goal line extended and the area created by the extension of the 8-meter mark to the dots and across the dots. The definition of a penalty zone is also included in Rule 13.

An additional change in 10-1-1 establishes defensive positioning on the hashmarks closest to the free position on the 8-meter free position and also eliminates stoppage of play for delay of game due to competition for inside position.

“Establishing the penalty zone and the placement of the defense on the adjacent hashmarks for an 8-meter free position is a rules change that the committee feels will improve the administration of the penalty by increasing the flow of the game and minimizing risk of injury,” Atkinson said.

Among other major changes were the release of the ball from the crosse in relation to timing, and the administration of alternate possession in the critical scoring area.

Changes in Rule 4-8 establish the release of the ball from the crosse before time expires as a legal shot, eliminating the judgment call at the goal line. A shot or propelled action must release the ball before time expires, and a goal cannot be scored when the ball is released after the whistle has blown or horn has sounded.

In Rule 5-4-3b, alternate possession in the critical scoring area is awarded at the closest dot, regardless of the location of the foul in relation to the goal line.

A change in Rule 7 PENALTIES establishes that a free position is now awarded at the dot for goal circle fouls by the defense – other than for an illegal deputy – rather than 8 meters out to either side level with the goal line. This allows for easier administration of the penalty and minimizing the risk of injury.

The committee continues to stress the importance of risk minimization in girls lacrosse with its 2018-19 points of emphasis. The criteria related to the “officiating of obstruction of free space to goal,” “rough and dangerous play” and “empty stick check – intentional vs. unintentional” are the focus of the rules committee for the 2018-19 season.

A complete listing of the girls lacrosse rules changes will be available on the NFHS website at www.nfhs.org. Click on “Activities & Sports” at the top of the home page and select “Lacrosse-Girls.”

According to the 2016-17 NFHS High School Athletics Participation Survey, there are 93,473 girls participating in lacrosse at 2,717 high schools across the country.

The NFHS Voice: Thanks to NFHS Network, Viewership of High School Spo.

The NFHS Voice: Recognition and Thanks – Not Abuse – Needed for High .