Smokeless Tobacco, E-cigarettes, Vaping: What is the Real Deal?

• Snuff: Finely ground tobacco packaged in cans or pouches and sold as dry or moist. 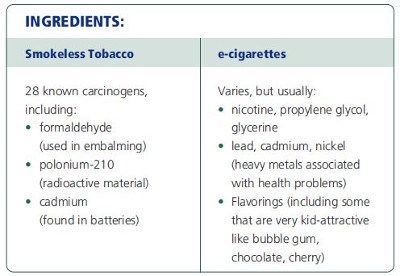 An electronic cigarette, or e-cigarette, is an electronic handheld device that vaporizes a flavored liquid that contains nicotine. “Vaping” refers to inhalation of the vapor, and has increased in popularity because of the myth that it is less addictive and less dangerous than solid tobacco products. In 2015, e-cigarettes were the most commonly used smoking product among middle school and high school students.

Oral tobacco products are not regulated by the Food and Drug Administration (FDA); there is also no regulation over what can be placed in the tobacco product. As of 2016, the FDA has extended regulations to e-cigarettes. 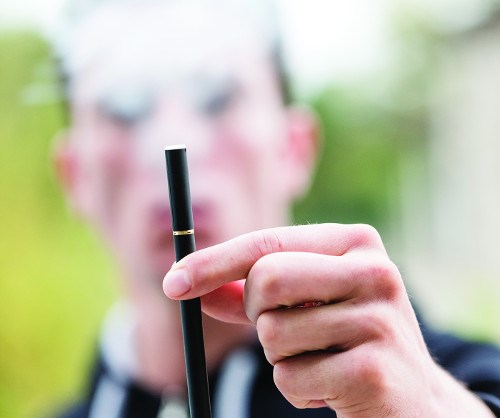 Many health hazards are attributed to the use of tobacco products. Most people are able to associate diseases such as heart disease and lung cancer with cigarette smoking, while the adverse effects of smokeless tobacco and e-cigarettes may seem comparatively benign to them.

It is a myth that smokeless tobacco is “less dangerous” than other products where tobacco is burnt and nicotine absorbed through the lungs. The long-term health effects of e-cigarette use are unknown. E-cigarettes have been touted as a smoking cessation treatment tool. However, when young people use e-cigarettes, there is a link to tobacco smoking later.

A large NCAA study published in 2001 showed that for the eight categories of substance use, smokeless tobacco was the thirdmost widely used at 22.5 percent (behind alcohol and marijuana), with wide variations according to sport. In rural areas, prevalence of smokeless tobacco use is about three times that of urban areas, and again is higher among subgroups of male students, such as rodeo athletes (42%), smokers (32%), wrestlers (19%), baseball players and Future Farmers of America members (18%), and football players (16%).

In order to prevent and reduce tobacco addiction in high school athletes, comprehensive school policies should include enforcement of tobacco-free campus environments, prohibiting tobacco use at all school facilities and events, and encouraging and helping students and staff to quit using tobacco. Unfortunately, the sad truth is that coaches, teachers and other role models are also smokeless tobacco users. The message sent to students is confusing: “It’s OK for us to use, but not for you to use.” For school policies to be most effective, enforcement must come from the topdown.

The Centers for Disease Control and Prevention have developed guidelines for school-based health programs to prevent tobacco use and addiction. These stress the importance of providing prevention education during the years when the risk of becoming addicted to tobacco is greatest, and offer opportunities for positive role modeling.

A coordinated school health program involving teachers, coaches, students, families, administrators and community leaders delivers consistent messages about tobacco use, including smokeless tobacco and e-cigarettes. Alcohol and substance use prevention and treatment programs should also address tobacco use. Well-developed programs can dramatically decrease the likelihood that a young person will be a regular tobacco user as an adult.

“FDA’s New Regulations for E-Cigarettes, Cigars, and All Other Tobacco Products”. US Department of Health and Human Services. US Food and Drug Administration. 12 August 2016

Cindy J. Chang, M.D., is an associate clinical professor in the Department of Orthopaedics and Family & Community Medicine at the University of California-San Francisco. As the head team physician at the University of California, Berkeley, she initiated the installation of the first five AEDs on the campus in 2000. She is a member of the California Interscholastic Federation’s Sports Medicine Advisory Committee and the NFHS Sports Medicine Advisory Committee.

Brad Coleman is facilities manager of the Sanford Sports Complex in Sioux Falls, South Dakota, and has officiated high school sports for many years. He is a member of the NFHS Sports Medicine Advisory Committee.

Katherine L. Dec, M.D., is a professor, Department of Physical Medicine and Rehabilitation, and, Department of Orthopaedic Surgery, VCU Health System, and is a member of the NFHS Sports Medicine Advisory Committee.