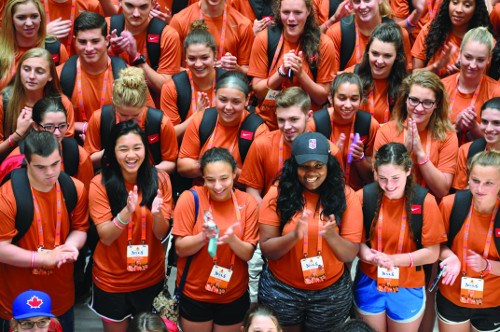 This past July, the NFHS hosted the three-day National Student Leadership Summit (NSLS) at the Hyatt Regency Indianapolis. More than 120 student ambassadors – mostly student-athletes – from 27 states came to the summit to get a better understanding of leadership and take the lessons they learned back home to apply in their schools and communities.

This was the second year for the Summit, which was modified from the former NFHS National Student Leadership Conferences, the last of which was held in 2010. The Summit is a more focused and smaller gathering of students, who were selected by their respective state associations.

“There is something that leaders found special about you – they believe in you,” Elliot Hopkins, director of the NSLS and NFHS director of sports and student services, told the student leaders during the opening ceremony.

The opening ceremony was topped off by an energetic and interactive speech from Eddie Slowikowski, an author, professional speaker and former NCAA All-American runner. Slowikowski touched on striving for greatness, going after a dream and what it means to be a leader.

Slowikowski reminded the students that a leader sees things that others cannot see yet and has to show others the way. He made sure the student leaders understood that if they start leading, striving for their goals and living life with passion today, their lives will be more successful.

Throughout the Summit, the student ambassadors attended four hour-long workshop sessions that were led by experts from around the country. Each expert shared different themes, which when put together are the keys to becoming an effective and great leader. These themes included perspective and inclusion, relationship building, communication and team-building, and digital identity. 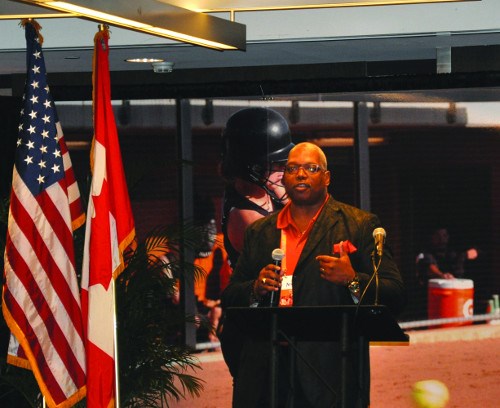 The session on perspective and inclusion was led by Dr. Kevin Ringhofer, a consultant and speaker from Minnesota. Ringhofer asked questions dealing with whether or not all people are created equal and have equal opportunities to make a good life for themselves. Half of the students said that everyone is created equal but their opportunities may not be. The other half believed it is how people in a particular situation view their opportunities and what a good life means to them. A good life to one could be a bad life to another – it’s all about perspective.

Ringhofer’s objectives were to get students to re-think their assumptions about people, become more empathetic of others, expand their ability to get to know those who appear different and to become more willing to invite other people into their lives – and they did.

“There’s always going to be people from different backgrounds and everyone will interpret them in different ways such as economic, social class or disabilities. This workshop really showed me how the world has such a variety of people that should connect us, and we really should appreciate and value these differences instead of spreading farther apart,” said Jon Tressler, a senior baseball player at Newark (Delaware) Charter High School.

The session on communication and team-building was led by Dr. Greg Dale, director of sports psychology and leadership programs at Duke University, who posed thought-provoking questions to the students. One question that created much debate was whether or not it’s important for great leaders to be liked by their teammates. With almost a split decision, Dale reminded the attendees that being a leader cannot be based on popularity.

“In order to be a great leader – not a good leader but a great one – you can’t view leadership as a popularity thing. Yes, you may want to be liked and respected, but I can almost guarantee you that a great leader would sacrifice being liked for respect any day,” Dale said. “Your attitude is what reflects your leadership, and if you go into a situation with a great attitude, teammates are going to follow you whether they like you or not.”

One of the other workshops was led by Omari Pearson, a mentor to high school and college students and founder of Passion to Purpose. Pearson’s session focused on social media awareness and identity. The student leaders were asked a series of questions regarding what their social media presence says about them and what they would want it to say about them.

Pearson ended the workshop with an interactive experience regarding “landmines.” He had the students grab a partner and had one of them close their eyes, while the remaining students scattered around paper plates – the “landmines” – in front of them. The student with eyes closed had to listen to the partner’s voice while all the other attendees were screaming at the top of their lungs. If the student stepped on a “landmine,” he or she had to answer a question posed by Pearson about how to use a digital identity to increase the chances of getting into college and getting a job.

For Pearson, this exercise was supposed to show the students how the outside world – the landmines and screaming – can affect how they portray themselves online and how others perceive them.
“You don’t know who’s following you on social media,” Pearson said. “You have to be aware of yourself and those who follow you. Don’t ever think you’re too young to start leading. You’re rock stars to middle schoolers.”

The final workshop focused on forming and maintaining meaningful relationships led by Deb Hult, founder of Core Trainings and a renowned presenter on relational leadership.

Hult stressed that leadership equals influence, and that when people are put together they end up feeding off each other, which ultimately creates an environment that flourishes when it’s a community of people rather than just one.

“It’s all behavior,” Hult said. “We all think about how we behave and how we come across. If the student leaders can start to identify how they come across, they can then realize how they actually make people feel. And I believe leadership is influence, so if they use their ability to make people think positively, feel positively and act positively, then they’re using their emotional connection for good.”

After the workshop sessions, the student ambassadors traveled to nearby Arsenal Technical High School to interact and play with athletes from Special Olympics Indiana.

The students got the chance to learn about an initiative that started in 2012 between Special Olympics Indiana and the Indiana High School Athletic Association called “Champions Together,” which promotes Unified Sports programs. 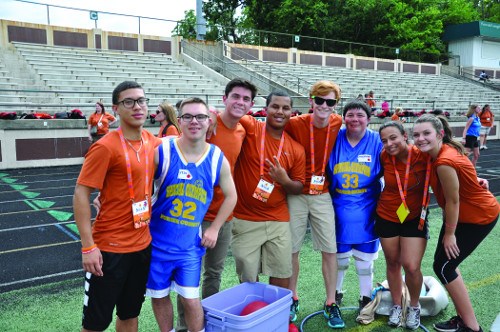 “In Special Olympics I am not defined by my abilities,” said Mitch Bonar, a Champions Together athlete. “But like all people, I want friends and people to talk to. I want to feel like I belong.”

The summit closed with a speech by Kathy Buckley, a hearing-impaired comedienne and motivational speaker. Buckley reassured the attendees that her hearing problem was not her handicap and that people shouldn’t view it as one either.

“Judging puts limitations on someone and in the end, it doesn’t define the person you’re judging, it defines you,” Buckley said.

The comedienne reiterated throughout her speech that in order to give respect you must have respect for yourself and that anything can be achieved when the mind and heart work together.

After giving those words of advice, Buckley also emphasized what it takes to be a leader.

“Leadership is to love and honor yourself and your life,” Buckley said. “Everyone on this earth has a gift to give. And to have fun with another human being is a blessing.”

The student leaders began their week with nerves and excitement and ended it with knowledge and experiences that they will take back to use in their schools and communities.

“The NSLS Summit was very beneficial to me,” said Meghan Boyd, a multi-sport athlete at Kent City (Michigan) High School. “Everything that I learned and heard made me really think about how I am as a leader and how my actions are perceived by those who look up to me. It’s definitely something I will be taking with me.”

The accepting and perceptive students, like Boyd, were exactly what those who observed the Summit not only hoped for, but expected.

“I feel comfortable and confident in our future because you will be the ones leading the charge,” Hopkins said. “Work hard, talk and communicate.”

Maddie Koss, a 2016 summer intern in the NFHS Publications/Communications Department, is a senior sports media major at Butler University.