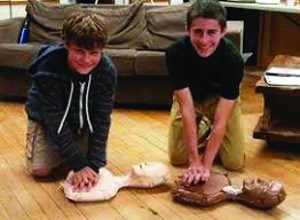 It bothered Tommy Watson that when an adult collapsed in the stands at a sporting event at his middle school that only one person, a nurse, among the 100 people in attendance knew CPR. He wondered why more people didn’t know CPR since it is so important in saving lives, and he wondered what he could do about it.

Using his eighth-grade project that year that involved community service, Watson decided to teach his classmates CPR as a way to make sure there were knowledgeable people around when the need arose. He first was taught the hands-only method of CPR by the local chapter of the American Heart Association, and he learned how to be a CPR trainer and shared his learning with the others in his class (and adults) at Williston (Vermont) Central School.

Watson’s local state senator lives in the same town and she heard about his project. She invited Watson to speak to the Vermont Senate Education Committee on which she serves. His presentation was made in conjunction with a bill being proposed by the state chapter of the American Medical Association (AMA) that would require schools to teach students CPR and how to use a defibrillator. And of course, while he was there, Watson taught the lawmakers how to do CPR.

Watson’s project ended and the bill stalled a bit, but his passion for teaching CPR continued. He finished teaching the others in his school community and then reached out to other groups to see if he could do the same for them. In just one 20-minute lesson, Watson shared how to save someone’s life with students and adults. He taught 300 people within the first year and decided to try for 1,000 – a goal he reached by the time he was a sophomore in high school.

The bill continued as well and, while modified so that CPR was to be included in every high school health course, it passed and was signed into law by the governor in a ceremony at Watson’s school. While there, the governor and lieutenant governor both received a CPR lesson from Watson. According to the AMA, 36 states now encourage CPR training in schools.

The AMA honored Watson with its National Youth Advocate of the Year award for his efforts in not only personally teaching more than 1,000 people how to do hands-only CPR, but for the role he played in approval of the bill that put CPR training in every Vermont high school’s health class curriculum.

Watson’s goal now is to give a CPR lesson to 3,000 folks before he graduates from high school.