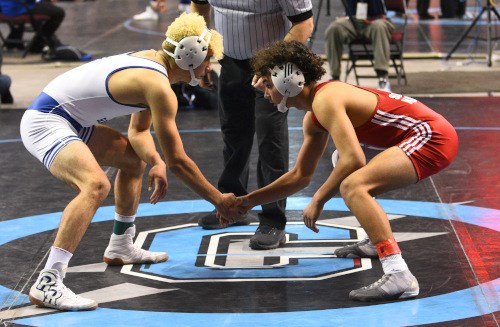 As the result of a concerted effort to accommodate the growing number of female wrestlers, the 2020-21 high school wrestling rules changes are headlined by significant adjustments to weigh-in protocol and appropriate hair length requirements.

The National Federation of State High School Associations (NFHS) Wrestling Rules Committee met April 5-6 and recommended 11 rules changes to take effect next school year. In accordance with current health safety guidelines, the rules meeting was held in an online format. All rules revisions recommended by the Wrestling Rules Committee were approved by the NFHS Board of Directors.

“These rule changes are some of the most prolific modifications in the history of high school wrestling,” said Elliot Hopkins, NFHS director of sports and student services and liaison to the Wrestling Rules Committee. “The rules committee made necessary, drastic changes to attract more young people to our sport without sacrificing the health and safety of the participants.”

The weigh-in procedure was altered through a combination of changes to Rule 4, Section 5 (Weighing-In) of the Wrestling Rule Book. Following an amendment to the legal uniform laid out in Rule 4-1-1c, which now permits female wrestlers to wear a form-fitted compression shirt that completely covers their breasts in addition to a one-piece singlet and a suitable undergarment, Rule 4-5-7 was rewritten to require that a legal uniform be worn during weigh-in and that no additional weight allowance be granted. An additional clause prohibiting shoes and ear guards during weigh-in was also written into 4-5-7.

Weighing-in with a legal uniform allowed the Committee to break down more gender barriers with subsequent changes to Rules 4-5-1, 4-5-2 and 4-5-4. Previously, weigh-ins consisted of shoulder-to-shoulder lineups of each contestant that: were separated by gender (4-5-2), took place a maximum of one hour prior to competition (4-5-1) and required supervision by a referee of each respective gender (4-5-4).

With the institution of the legal uniform (one-piece singlet or two-piece), male and female wrestlers are now able to weigh-in together in the same lineup, allowing gender-specific language to be removed from all three rules. Additionally, the form-fitted compression shirt offers females a more suitable uniform for post-weigh-in skin checks, which are typically done by male officials.

“The change to the weighing-in process is remarkably timely, as schools have struggled in the past to identify adult females to weigh-in the female wrestlers,” Hopkins said. “This action accommodates transgender children as well; it respects their rights and dignity and addresses any modesty concerns for any affected children. We anticipate that the entire weigh-in process will be expedited and more efficient.”

Significant changes to the hair length rule (Rule 4-2-1) were also linked to the committee’s focus on inclusion. Previously, a wrestler’s hair could not “extend below the top of an ordinary shirt collar” in the back, below earlobe level on the sides or below the eyebrows in the front. Those confinements, along with the requirement that a hair cover be used for hair that exceeded said limitations, were deleted. Considerable support for this rule change from coaches and officials was generated by an initiative of the Tennessee Secondary School Athletic Association, which successfully experimented with relaxed hair restrictions this past winter.

“Removing the hair-length rule is a monumental change,” Hopkins said. “It is important to embrace the current culture of young boys and girls who are expressing themselves through their appearance, making this the perfect opportunity to extend wrestling to young people who otherwise would not be attracted to our sport. While the hair-length restriction has been removed, the requirement that hair control devices/treatment items cannot be hard, abrasive or sharp remains. If a hair cover is used, it shall be attached to the ear guards. Additionally, the barring of oils, or greasy substances on or in the hair is still in effect.”

Another modification to the wrestling uniform came through Rule 4-1-3. In order to curtail participants from intentionally lacing their shoes too loosely to cause a stoppage in the action and potentially thwart an opponent’s scoring opportunity, a technical violation will be assessed in any instance where a shoe comes off, and the injury clock will be started to correct the situation. This change is made under the assumption that a wrestler is, in fact, properly equipped to wrestle when the match begins, as a wrestling shoe that is properly laced and secured will not typically come off.

Technical violations were the subject of change in Rule 7-3-1 as well. To avoid penalizing a participant twice for the same sequence of events, wording was added to 7-3-1 declaring that points will not be awarded to a wrestler whose opponent has fled the mat if that wrestler has already scored for a near-fall or takedown.

Under Rule 8-1-4, a match will now automatically be stopped and restarted in the event a wrestler commits a fourth stalling violation. Previously, if the offender was called for a fourth stall of the match while in the defensive or neutral position, there was no guarantee his or her opponent would be awarded choice of position through a restart if the violation occurred during the third period.

“This rule remedies that if the fourth stall occurs in the third period there might not be an opportunity to restart before the end of the match,” Hopkins said. “This rule change assures that the offending wrestler is held accountable and subsequent points are awarded to the opponent.”

Based on the hair-length changes, Rule 5-29-1, which addresses unnecessary roughness, was edited to include “pulling an opponent’s hair” as an additional example of the offense.

Finally, a new article was added to Rule 8-2 dealing with participant injuries. Rule 8-2-9 has been designed to discourage wrestlers from requesting injury time from the official as an attempt to stop an opponent from scoring. If the referee determines a wrestler would have scored had the injury time-out not taken place, the injured contestant will be charged an injury time-out and applicable points will be awarded to the non-injured party.