On January 10, 2019, ballots from 34 states, the National Catholic Forensic League, National Speech and Debate Association and the Nation Debate Coaches Association were tabulated at NFHS headquarters to select the 2019-20 national high school policy debate topic. Arms Sales was selected over Nuclear Strategy with 72% of the votes.

In October the five topic areas were narrowed to two as part of a two-stage balloting process. Use of the second ballot assures that a majority of coaches across the nation favor the chosen topic area and resolution.

The 2019 Policy Debate Topic Selection Meeting will be held August 2-4 in Oak Brook, Illinois. Specific information regarding lodging, travel arrangements and daily schedules will be sent to your office at a later date. You may also check the website at: http://www.nfhs.org/sports-resource-content/nfhs-cx-debate-topic-selection-meeting/.

The following map summarizes the state-by-state balloting on topic areas. 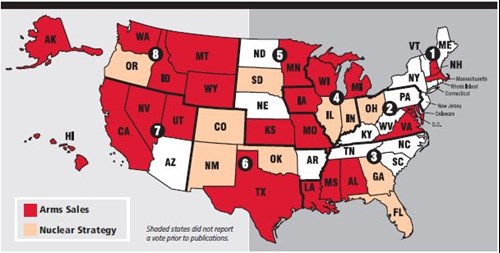