Near the end of the 1990s, technology began to become available that made it possible for sheet music to be digitized and then displayed for musicians to use for rehearsal and performance. The effort initially focused on the advantages of having sheet music in a digital form – the easy access to multiple pieces, the immediacy of making changes and being able to purchase music on the then-new Internet. There was no paper, no mailing, no lost parts, no damaged pages.

At that time, providing this technology required specific hardware – then and now known as a Digital Music Stand, which is basically a monitor on a pedestal that displayed the music in a usable manner for the performer to use. Most of the music available at that time was piano and solo instrument selections and the features were few.

Since then, digital music stands and their accessories have improved dramatically and are used in all music rehearsal and performance situations. Now capable of providing the music for large ensembles like orchestras or concert bands, they include auto and manual page turns (moving to the next page when appropriate), on-page editing (the ability to add rehearsal marks), transposition (changing the key) and being controlled by the conductor’s score (so everyone is on the same page, the same place).

At the same time, like most technology, the cost of these units has come down, making them a reasonable purchase for a school music program where there are several ensembles that can use them and the bulk of their music library is available digitally (or can be moved to a digital format). In concert with this effort has been the move by publishers to make more and more of their music available in a digital format, usable by the digital music stand technology.

And for those individuals wanting to move their music program in this direction, this would be the only direction available if it weren’t for the 2010 introduction of the Apple iPad. While there had been tablets available previously from other manufacturers – most notably the MicroSoft Zune – the iPad, with its easy-to-use apps, touchscreen technology, built-in wireless and reasonable cost, made having one something more students could afford. In addition, many schools started One-to-One programs where every student in school (starting with one of the lower grades) would have his or her own tablet (or laptop), and the need for the digital music stand hardware disappeared as a requirement for moving to digital sheet music for school groups. 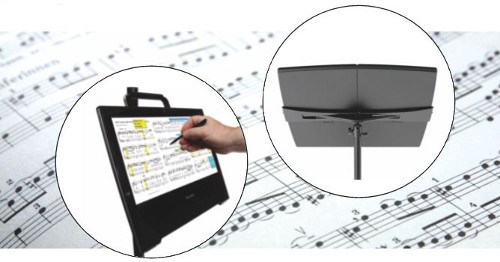 Of course, now there are multiple tablets available (most running the Android platform such as MicroSoft’s Surface, Samsung’s Galaxy or Google’s Pixel) and even smartphones that have fairly large displays. Even laptops have become light enough to use on a standard music stand although there is an entire market on stands to hold the various displays for music purposes (along with an ever- expanding accessory market).

The emphasis now is on the software to display the sheet music and how that can meet the other needs the performer or conductor has for rehearsal or performance. Besides the difference in platforms (IOS or Android, Mac or PC), the software also uses the music in one of two different ways: static pages or dynamic pages. Static pages are the music as it was printed by the publisher (usually in PDF format) while dynamic pages are the music as it would be in a music composition software like Finale or Sibelius.

There are advantages to both static or dynamic pages, primarily between the ease of providing music for the static system (a teacher can scan in his or her current library and make it available through the software) and the digital system (where the music needs to be purchased in that format or entered into the appropriate composition software to be used). This is the first consideration when evaluating which software will work best for your school group.

In just six years since the introduction of the first iPad, the number of music display programs has increased so that there is a product for every combination of purpose and platform. One consideration is how the software handles annotations. Can they be added to the music by the individual performer or by the conductor for a group of parts? Can they be exported to a printed version of the music. Other software considerations are whether it has the capability to handle page changes based on the music or the conductor’s choice, if the software can deal with a set list (arranging multiple pieces in a certain order so that an entire concert can be set up ahead of time), and what other features might be available (quick searches, multiple versions of the same piece, ability to use a page-turn foot pedal, numbered pages, smooth transitions).

While the initial cost of the software and supporting accessories may tax the current year’s music budget, the long-term advantages (and long-term usefulness) of this technology will reap benefits for everyone in your music program – from the lone student practicing his or her scales to the largest ensemble in concert. Schools that are One-to-One have the largest cost already covered and should seriously consider adding this technology to their music program. Given how far this technology has come in such a short time, improvements and enhancements are bound to continue and increase in years to come.

Steffen Parker has worked with computers since the mid-70s and has been a Macintosh user since its introduction in 1984. Serving as an IT support person for the Vermont Principals’ Association and the Information Support Specialist for Vermont’s Lamoille North Supervisory Union, Parker supports computer use for adults working in education, administration, finance and publication including the NFHS High School Today Publications Committee where he also serves as the Performing Arts representative.