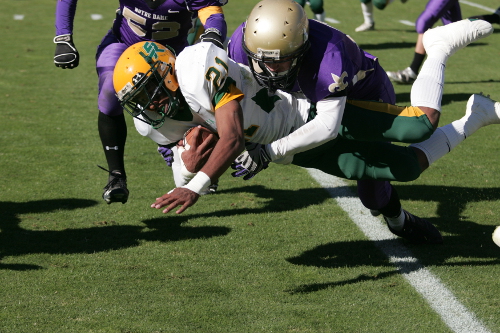 In its ongoing effort to minimize the risk of injury in high school football, the National Federation of State High School Associations (NFHS) Football Rules Committee expanded the provisions of unnecessary roughness to include contact with a defenseless player.

This revision in Rule 9-4-3g was one of six rules changes recommended by the Football Rules Committee at its January 23-25 meeting in Indianapolis. These changes were subsequently approved by the NFHS Board of Directors.

The revised rule now reads, “No player or non-player shall make any contact with an opponent, including a defenseless player, which is deemed unnecessary or excessive and which incites roughness.”

Bob Colgate, director of sports and sports medicine at the NFHS and editor of the NFHS football rules, noted that an example would be when a defensive player who is not in the vicinity of the ball is “blindsided” by a blocker on the offensive team.

Another change with a focus on risk minimization is a revision of the spearing rule – one of several examples of illegal helmet contact listed in Rule 2-20. Spearing is now defined as “an act by any player who initiates contact against an opponent at the shoulders or below with the crown (top portion) of his helmet.”

“The committee spent considerable time discussing and clarifying expectations related to contact involving any player that is deemed excessive or unnecessary – including spearing – that may occur during play,” said Brad Garrett, chair of the NFHS Football Rules Committee and assistant executive director of the Oregon School Activities Association.  “Minimizing risks to players involved in these situations must remain at the forefront of the game.”

In other changes, the rules committee revised the 2014 rule change regarding free-kick formations. A new Rule 6-1-4 was added to state that the timing of the foul for not having at least four players on each side of the kicker now occurs when the ball is kicked.

The rules committee also approved new language in Rule 10-2-5 regarding the enforcement of dead-ball fouls. The distance penalty for unsportsmanlike, non-player or dead-ball personal fouls committed by teams can offset. Equal numbers of 15-yard penalties by both teams will cancel and remaining penalties may be enforced.

The final change approved by the Football Rules Committee related to a series of downs. A new Rule 5-1-1b will read as follows: “The referee shall have authority to correct the number of the next down prior to a new series of downs being awarded.”

A complete listing of all rules changes is available on the NFHS website at www.nfhs.org. Click on “Activities & Sports” at the top of the home page, and select “Football.”

With Lost Seasons Last Year, Spring Sports and Arts Should Be Availab.

A Thank You to Music Educators