If you play golf, do you ever wonder why the pros seem to be able to hit the ball almost exactly where they want every time, while you’re slicing, hooking, or shanking much more often than not? Pro golfers, especially those on the PGA and LPGA tours, can do what they do so well because they have practiced their golf swing thousands upon thousands of times over a period of years, usually starting at a very early age. Tiger Woods was hitting golf balls beautifully at the age of three.

The golf swing is not a natural motion. It’s a learned motion. Precision, repeatability and consistency come only after a lot of repetition to the point that the swing becomes instinctive and the golfer no longer has to think about it. That is the holy grail of the sport, and it’s a prefect example of what is called “muscle memory.”

Muscle memory can be developed for almost any sport or physical activity – including officiating. That’s a good thing, but ONLY, if what you’re practicing and training your muscles to do are the correct movements for the sport you officiate. If you develop bad habits and repeat them, they become part of your muscle memory, too, and that’s not going to help you advance in your officiating career.

The key for an official is to work hard to do things correctly the first time and every time after that until those correct movements and actions become part of your muscle memory. That has been my constant goal as a high school and college basketball official. 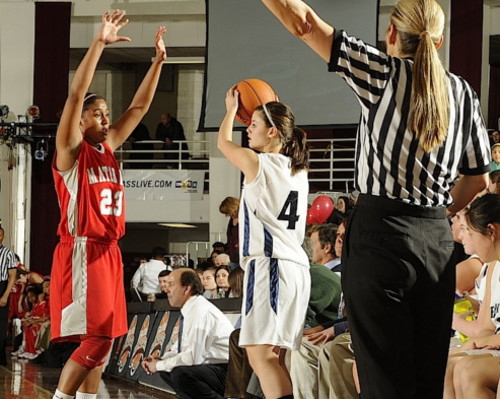 When I began officiating basketball, I constantly checked to see if I was in the correct position, given the action on the court. I reminded myself every time to raise my arm straight and strong after every whistle and make the proper signal. I had to will myself to hustle to the table and report a foul and communicate to the table crisply and correctly. These actions were not yet instinctive. But I worked at it. I would walk around the block at night and work on my signals. I watched myself on tape. I looked in the mirror. Eventually the proper actions and movements became part of my muscle memory. I didn’t have to think about doing the right things. I just instinctively did them. That freed me up to sharpen the mental components of my game – rules knowledge, play selection, judgment, game management, patience with the whistle, and all those other fine points that separate the good officials from the not-so-good and the great from the good.

But, that’s just basketball. What about other sports? To find out, I asked a couple of my fellow basketball officials, who also work other sports, about what they practice to train their muscle and mental memory and become better at their craft.

One of my colleagues, Jim Brennan, is a fine basketball official as well as an extremely accomplished and well respected Division I college football official. He’s worked games involving numerous big time programs, including in 2013, the Michigan vs. Notre Dame game that drew the largest crowd in college football history.

While football and basketball are very different games from an officiating perspective, the mindsets are very similar when it comes to developing good habits and making them instinctive. Here are some of Brennan’s observations:

Baseball is totally different from football and basketball in terms of the pace of the game and the specific in-game responsibilities of the umpires. But the work ethic is and should be the same. The really good umpires develop proper techniques and mechanics. They practice and repeat them until they are instinctive, freeing up their eyes and mind to see the play from the best possible position and make the correct ruling.

Another basketball officiating colleague of mine, John Basso, is also a veteran baseball umpire who has worked for more than 30 years at the high school level and all college division levels. While he, too, has committed the correct actions to muscle memory, he still constantly works on these things and is always learning. Here are some of his thoughts:

I thank my colleagues for their input and observations. They and I agree that if you want to become an accomplished official for any sport, you have to put in a lot of time, not just during the season but throughout the offseason as well. That’s how you build your muscle memory and your mental memory and keep them both in top shape. Every good and proper technique you can store in your memory will serve you well on the court or field of play. Your good habits will become part of you. You will do the right things automatically, without thinking about them. You will gain confidence, strength and credibility. Justifiably, you will be able to take greater pride in your work.

The bottom line is this: Practice really does make perfect, but only if you practice “The Right Stuff.”

Cheryl McCarthy-Chiari is a Board 10 official in New Haven, Connecticut, and a Division II and Division III women’s college official. She’s also a liaison to the IAABO Women’s Coordinating Committee.