Is Your School Prepared to Handle Sudden Cardiac Arrest? 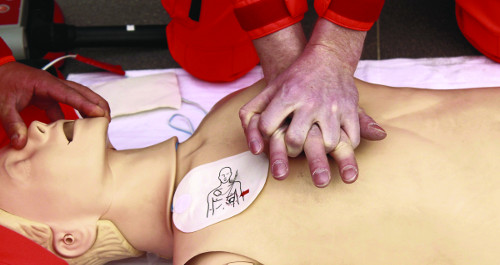 Sudden cardiac arrest (SCA) is when the heart stops pumping blood effectively and fails to provide blood flow and oxygen to vital organs including the brain and heart, causing the victim to collapse unconscious. SCA is the leading cause of death in the United States and also the leading cause of sudden death in young athletes during sports. Often, there are no warning signs before someone suffers SCA, although sometimes SCA is preceded by chest pain, shortness of breath or heart palpitations. SCA should be assumed in any situation where a person is found unconscious or is observed to collapse and is unresponsive. Abnormal breathing such as occasional gasping and seizure-like activity also can occur in SCA.

What are the “Chain of Survival” and the Emergency Action Plan (EAP)?

If a person is found unresponsive, is not breathing normally or is having seizure-like activity, the first three steps in the “chain of survival” should be taken immediately:

These steps are the foundation of your school’s emergency action plan (EAP) for SCA. Your school’s EAP should be reviewed and rehearsed at least annually with likely school responders (coaches, designated teachers, administrators, school nurse and athletic trainer), and all staff should be aware of the location of AEDs on your school campus.

The National Federation of State High School Associations (NFHS) is encouraging every high school that does not have an existing EAP in place to utilize the Emergency Action Planning Program, “Anyone Can Save a Life.”

Originally developed in 2008 by the Minnesota State High School League and Medtronic Philanthropy, “Anyone Can Save a Life” provides an emergency action plan and training program for after-school practices and events. Originally created to respond to cardiac arrest, this third version of “Anyone Can Save A Life” now covers all medical emergencies.

With the financial support of the NFHS Foundation, this program has been distributed in hard copy to member state associations and their member schools. “Anyone Can Save A Life” training materials are also available at no cost at: http://www.anyonecansavealife.org/

This innovative program involves assigning students to three emergency response teams within each sports team: the 911 team, the CPR team and the AED team. This coordinated team response to every serious medical emergency that could occur during practice or competition, including SCA, takes minimal time to discuss and rehearse. However, it provides maximum benefit to the school community, providing students and coaches with skills that can potentially save lives.

Why do we need an Automated External Defibrillator (AED) on our school campus?

Even when the EAP is promptly activated and CPR is initiated, survival rates are poor if defibrillation is not performed until EMS personnel arrive at the scene of the SCA. The survival rate for all EMS-treated out-of-hospital cardiac arrest in the United States is only 8.4 percent (1). EMS response times can vary widely depending on the type of EMS, community size, traffic congestion and level of funding. 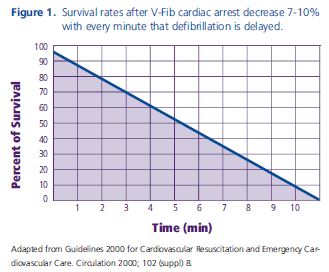 How beneficial is it to have an AED available for use during school events, including after-school practices and games?

An important research study looked at the effectiveness of school-based AED programs during a two-year time period (2009-11) (3). Of the 59 confirmed cases of SCA, 44 percent occurred in students and 56 percent in adults. An AED was applied in 85 percent of the cases and a shock delivered onsite in 66 percent of those cases.

This study demonstrated that SCA in students and adults who suffer from SCA on a high school campus is largely a survivable event with prompt recognition, early CPR and access to an AED. Ideally, an AED should be used within three minutes of a life-threatening emergency, and depending on the size of your school campus, you may need more than one AED. Therefore, having AEDs available at your high school is a critical part of your school’s EAP.

With the early use of an AED, students and adults who suffer a SCA on your school campus will be given the very best chance of survival.

And remember, it’s not just about having an AED on the wall. The AED should be part of your school’s EAP, and the response to SCA at your school practiced and reviewed by your school staff every year. Be prepared and anyone can save a life!

Cindy J. Chang, M.D., is an associate clinical professor in the Department of Orthopaedics and Family & Community Medicine at the University of California-San Francisco. As the head team physician at the University of California, Berkeley, she initiated the installation of the first five AEDs on the campus in 2000; there are now more than 80 AEDs, including in campus police vehicles. She serves as the chair of the California Interscholastic Federation’s Sports Medicine Advisory Committee and is past president of the American Medical Society for Sports Medicine (2011-12). She is currently a member of the NFHS Sports Medicine Advisory Committee.

Guidance for State Associations to Consider in Re-opening High School.