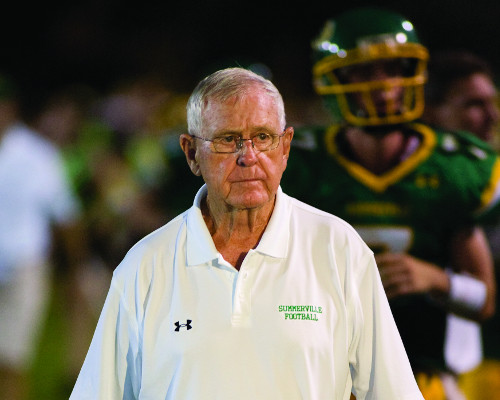 After 63 years at the helm of the Summerville (South Carolina) High School football program, the legendary John McKissick is retiring. Since his first season in 1952, McKissick has won a remarkable 621 games, more than any coach at any level of football. He also led the Green Wave to 10 South Carolina High School League state titles, five of which came in undefeated seasons.

A paratrooper in World War II, the 88-year-old McKissick has made an impact on generations of young athletes in Summerville, including three of his grandchildren. The football field at Summerville is named after him, as is the road that runs by it.

Also the author of two books on coaching, McKissick has won many honors for his unforgettable career. In 1990, he was inducted into the NFHS’ National High School Hall of Fame. In 2012, he was named the Don Shula NFL High School Coach of the Year after being nominated by the Carolina Panthers. This past year, McKissick was inducted into the South Carolina Football Coaches Association’s Hall of Fame as part of its inaugural class.

Brandon Jones is a summer intern in the NFHS Publications and Communications Department and a junior at Indiana University Bloomington.

Consideration of Liability Issues in 7-on-7 Football