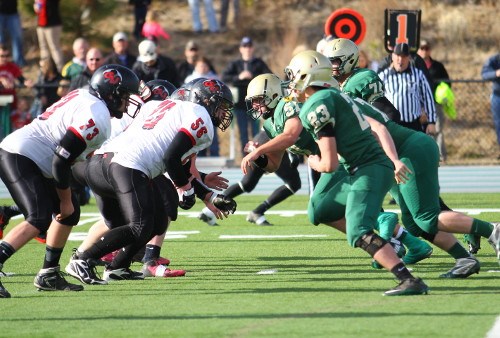 New rules on blindside blocking are the most recent steps taken by the National Federation of State High School Associations (NFHS) Football Rules Committee in minimizing the risks associated with the sport.

The definition of a blindside block established by the committee is “a block against an opponent other than the runner, who does not see the blocker approaching,” and now results in a 15-yard penalty.

The committee stated that the blindside block “involves contact by a blocker against an opponent who, because of physical positioning and focus of concentration, is vulnerable to injury. Unless initiated with open hands, it is a foul for excessive and unnecessary contact when the block is forceful and outside of the free-blocking zone.”

“As has been the case for many years, the NFHS Football Rules Committee continued to place their main emphasis on risk minimization,” said Todd Tharp, chair of the NFHS Football Rules Committee and assistant director of the Iowa High School Athletic Association. “With this new definition of a blindside block and the penalty to be assessed, the committee stresses the importance of proper coaching techniques under the rules and accurate enforcement by the game officials.”

The committee implemented this change in an effort to reduce risk of injury due to the increased use of the pop-up kick on onside kickoffs. Such kicks will be penalized as a dead-ball free-kick infraction, as noted with new Rule 6-1-11 PENALTY.

b)      A receiver attempting to catch a pass who has not had time to clearly become a runner;

c)      The intended receiver of a pass in the action during and immediately following an interception or potential interception;

d)      A runner already in the grasp of a tackler and whose forward progress has been stopped;

e)      A kickoff or punt returner attempting to catch or recover a kick, or one who has completed a catch or recovery and has not had time to protect himself or has not clearly become a ball carrier;

f)       A player on the ground including a ball carrier who has obviously given himself up and is sliding feet-first;

g)      A player obviously out of the play or not in the immediate vicinity of the runner; and

h)      A player who received a blindside block with forceful contact not initiated with open hands.

“A great deal of time was spent by the committee creating specific criteria to define exactly what a defenseless player is,” Tharp said. “Coaches can use these examples to focus on the proper mechanics of blocking and tackling, and game officials now are able to use this expanded definition to focus on continued risk minimization of the players.”

Changes to Rule 7-1-6 expand on the situations required for encroachment to occur after the ready-for-play and after the snapper has placed his hand(s) on the ball. The rule previously stated that encroachment occurred if “any other player breaks the plane of the neutral zone.” In addition, now defensive players are restricted from contacting the ball prior to the end of the snap or making contact with the snapper’s hand(s) or arm(s) until the snapper has released the ball.

Regarding the uniform change in Rule 1-5-1b(3), effective with the 2021 season, “the jerseys of the home team shall be a dark color that clearly contrasts to white.”

“The committee revised the rule to provide schools and manufacturers more clarification regarding the game’s current trend of utilizing lighter gray shades,” Colgate said. “The requirement for teams to wear contrasting colors to white is not a new rule, and it is the committee’s expectation that this new clarification will allow changes to be made during normal replacement cycles.”

A complete listing of all rules changes will be available soon on the NFHS website at www.nfhs.org. Click on “Activities & Sports” at the top of the home page, and select “Football.”

Sports Organizations Working Together as One Team for Benefit of All .