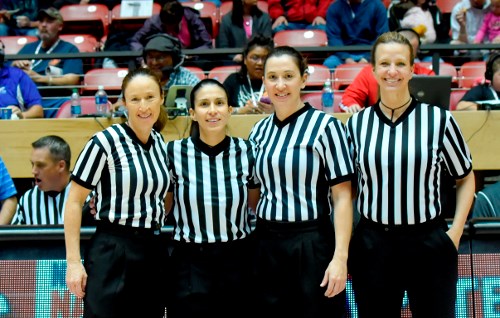 The issue is twofold. First, we must find ways to recruit more men and women to become involved in officiating high school sports. Second, we have to address issues that are causing these individuals to discontinue their service as contest officials.

To address the first issue, the National Officials Recruitment Campaign designed to recruit more officials on a state-by-state basis. Athletic directors received a poster with the April issue of High School Today, which is designed to be placed in locker rooms or athletic offices in high schools throughout the country.

Titled “The Final Whistle? – Not So Fast,” the poster emphasizes that “The High Schools in Your State Need New Officials.” The poster encourages student-athletes to considering becoming officials to:

The poster provides the name of the new website that has been created for this project where individuals can sign up to become officials in their respective state – www.HighSchoolOfficials.com.

Sometimes, individuals have been involved in high school sports and have an interest in officiating but simply do not know the steps necessary to making that a reality. Now, when a person signs up at www.HighSchoolOfficials.com, the information is directed to the applicable state high school association, which, in turn, will provide the steps necessary for that individual to get started in his or her state.

In addition to the poster and the website, a year-long social media campaign kicks off this month. Through social medial platforms of Facebook and Twitter, regular posts will be provided to high school and college athletic directors for those individuals to send to student-athletes in their schools. As individuals graduate from college, we believe there are many former athletes who may be interested in staying connected to the world of sports along with making some extra money as they begin their career.

In addition, an article by Tim Leighton in the April issue of High School Today addresses some of the ways that state associations are attempting to keep officials involved in the avocation, including mentorship programs to help new and younger officials cope with negative on-court situations.

Many of our state associations have intensified sportsmanship efforts to encourage positive behavior at events. Minnesota started a “Thank a Ref” campaign two years ago to encourage member schools to show support for officials. Efforts like these must continue if we are going to be successful at recruiting more individuals to the officiating avocation.